Carson’s spoke on political issues of the day and touched on universal themes like the greatness of the United States. He further reiterated his proposals on the economy, education and foreign policy — including his thoughts on how the United States should deal with Syrian refugees.

The former Johns Hopkins neurosurgeon received perhaps his loudest applause when he laid out the hypothetical case for the destruction of America, which drew a resemblance to the status quo under President Barack Obama.

“If I were in charge of this nation and I was trying to destroy it from within, I tell you what I would do – I would try to divide the population,” Carson said. “I would drive wedges in every place that I possibly could and I would have people hating each other trying to destroy anything that was good. I would drive the debt to unsustainable levels. I would invite people here from other countries and give them all kinds of benefits. I would encourage people to get on food stamps or anything else they can. I would be giving people free telephones. I would be telling people that you can get free college tuition.”

“And I would try to destroy our military,” he continued. “I would have the smallest Navy since 1917. I would have the smallest Air Force since 1940. I would have sequester programs that cut out the hard personnel – lieutenant colonels, captains, majors – send them letters saying, ‘Don’t bother to reenlist.’ Morale would be so low. Our generals would be retiring. I would tell our veterans how wonderful they are, but I would fix the system to help them and create a situation where 22 of them a day are committing suicide because they’re so desperate.”

“If that’s any resemblance to what’s going on – I’m sure it’s purely coincidental,” he added.

Carson also took aim at those who are proponents of the government entitlement state and explained that he believes America cannot be all it can be if the public is dependent on government assistance.

“Some people probably read the Constitution and they read the Preamble wrong,” he said. “The Preamble says one of their jobs is to promote the general welfare. That doesn’t mean to put everybody on welfare.”

Carson went on to tackle one of the major stories in the news cycle — how to deal with the Syrian refugees and current calls for mass resettlement in the United States.

“If you look at what happened last week in France,” he said. “If you look at an administration that wants to bring in thousands of people from Syria — now, I’m as compassionate as the next guy, but I don’t’ want to bring anybody in from that part of the world who isn’t fully screened and vetted in satisfactory way.”

Prior to the rally, at a campaign event in Mobile, Carson drew an analogy between the refugees fleeing Syria to that of protecting your children from “rabid dogs.” Carson followed up on that analogy at his South Alabama rally and took a shot at the media for what he deemed to be a product of “dishonesty in our media.”

“I always find it kind of amusing — every day, there are all these articles about me that I said to the news media today that you know that bringing people that are not fully screened and vetted from a part of the world where there are jihadists who want to destroy would be like – you love dogs and you love children but you know that there’s a rabid dog out there. Well, you’re going to bring your child in the house until you know that rabid dog had been taken care of.”

“So what did the news media do? ‘Carson says the Syrians are like rabid dogs.’ This is kind of thing — fortunately it only works on gullible people, but the problem is there are a lot of gullible people. And you know it is kind of a sad thing that we reach a point in our society where such dishonesty in our media. It really is very sad.”

Thursday’s rally was one of a series of campaign events for Carson in Alabama’s port city, which also included stops at two local schools, Prichard Preparatory School and St. Paul’s Episcopal School, and a fundraiser dinner at a private home with tickets for the dinner ranging between $500 and $1,000. 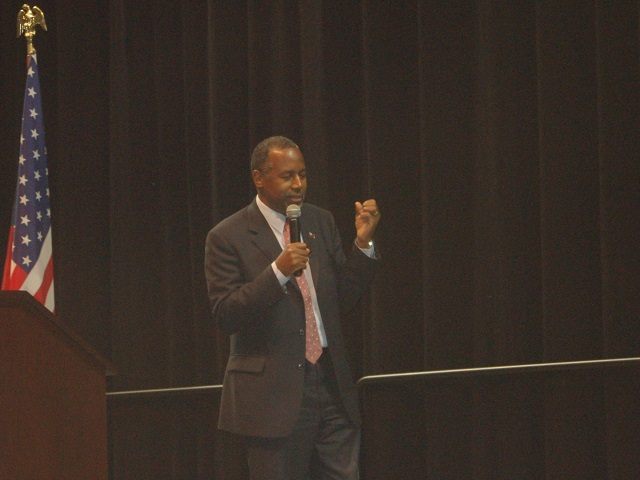