According to the New York Times, the shooting suspect is named Robert Lewis Dear. He is reportedly 59 years old.

The University of Colorado has revealed the name of the police officer killed in today’s shooting. 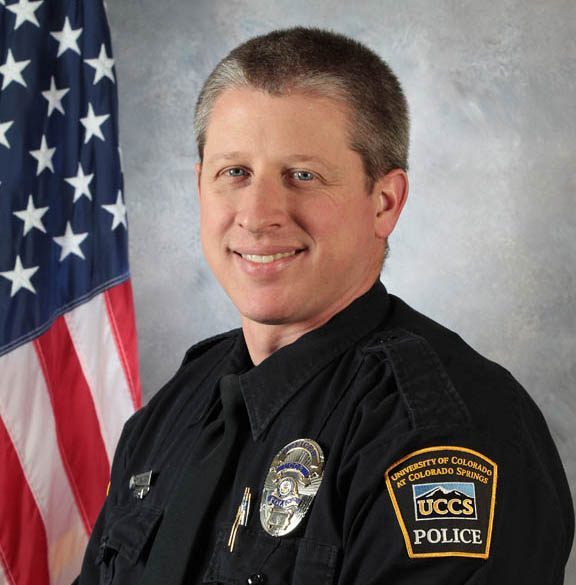 A UCCS police officer, Garrett Swasey (pronounced /Sway’zee/), 44, responded in support of Colorado Springs Police to the active shooter situation at about 11:50 a.m. Friday. He was killed in the line of duty.

UCCS officers are sworn, state-certified police officers. Officer Swasey was on duty at the campus and responded in support of Colorado Springs Police.

Officer Swasey was a six-year veteran of the UCCS Police Department.

The number of confirmed slain victims has increased to three.

Local news reports that two people were killed: “Gazette news partner KKTV reports that a University of Colorado at Colorado Springs officer was killed; 9News in Denver reported that one offficer and one civilian are dead.”

“Very, very difficult afternoon in Colorado Springs. My heart goes out to… the victims here. At this point, I have as many questions as you do. We’re still trying to figure out what happened, who our victims are, and what we need to do from this point forward. I have some hurt police officers, they’re at the hospital, that’s where I’m headed to next. We’ll give you some more information as soon as we know it.”

Colorado Springs Mayor John Suthers spoke after Carey, saying, “The only thing I would add is that the perpetrator is in custody. The situation has been resolved, there is no continuing peril to the citizens of Colorado Springs. But there is a huge crime scene that has to be processed. We have to determine exactly how many victims there are, and we’ll be reporting on that in the near future.”

Colorado Springs Fire Chief Chris Riley added, “Thankfully the situation at this time has been resolved but our hearts and our prayers go out to the families and loved ones of the victims that were involved in today’s events.”

According The Gazette, at 4:54 p.m. “Colorado Springs police announced they had detained the gunman who was previously holed up in a Planned Parenthood clinic in the city.”

The Gazette reported the radio traffic related to the suspect’s surrender:

“He’s going to come out with his hands up.”

“Can you confirm he has his hands clear?”

“He’s facing down that hallway to the east, his shoulders down.”

“We’ve got to take him out if he has any IED suspicion on him.”

“Are we in the way of the snipers?”

At 4:15 pm MT Colorado Springs Police Department spokeswoman Lt. Catherine Buckley said the gunman currently holed up in a Planned Parenthood clinic in the city began his attack there and that he brought “bags” with him. She indicated that he placed “devices” in front of the building and inside of it. She said law enforcement personnel will have to check them to make sure they are not “improvised devices.” In later references she called the “devices” “items.”

Fox News Channel reports at least four officers have been injured in the standoff with the gunman.

Buckley said the suspect has not been identified and that reports to contrary are premature.

Fox News Channel and The Gazette report witness accounts that claim the shooting at the Colorado Springs Planned Parenthood clinic actually began at a nearby Chase Bank location.

Fox News talked on-air to a witness at a nail salon near the Planned Parenthood clinic who “first thought [the incident] was a bank robbery.” Cell phone video captured by the witness appeared to show a Chase Bank branch as the first location where law enforcement moved in.

The witness said the suspect ran from the bank to the Planned Parenthood clinic.

Denise Speller, manager at a nearby haircut salon, said she heard roughly 10-20 gunshots in the span of less than five minutes. She said she saw a police cruiser and two officers outside near Chase Bank, not far from the Planned Parenthood facility. One of the officers appeared to fall to the ground and the other office knelt down to render aid, then tried to get the officer to safety behind the car, she said. Another officer told Speller to seek shelter inside the building.

She says CSPD personnel have only encountered one gunman and that law enforcement personnel continue to take fire from him inside the building.

According to The Gazette, some of the officers responding to reports of a gunman at a Planned Parenthood clinic in Colorado Springs are now at a Veterans Affairs “across the road” instructing “patients and staff to stay away from windows.”

Police say they do not know the connection between the gunman and Planned Parenthood nor do they know if they are dealing with a hostage situation. “They are not evacuating neighborhoods to the north of the scene, but they are asking residents to stay inside and avoid the area.”

At 2:07 p.m. Gazette reporter Stephen Hobbs tweeted: “A law enforcement officer [was] loaded onto a stretcher from [a] police armored vehicle.” This coalesces with other reports that three officers have been injured trying to confront the gunman.

Colorado Springs police officers have a lone gunman at a Planned Parenthood clinic contained. Fox News reports that three officers have been injured by the gunman and that one clinic patient was injured as well.

Colorado Springs police and Colorado State Police are positioned around the clinic with guns drawn. The gunman allegedly shot out the rear window of one of the responding police vehicles.
The Colorado Springs Gazette reports the gunman is described as wearing “a long coat with a ‘hunting-type’ hat.”

According to The Gazette, some of the officers responding to reports of a gunman at a Planned Parenthood clinic in Colorado Springs are now at a Veterans Affair “across the road” instructing “patients and staff to stay away from windows.”

Details are scant but Colorado Springs indicate they have responded to a call of an “active shooter” at a Planned Parenthood clinic.

At 11:57 a.m. CSPD tweeted that they were “responding to call [of ] active shooter in Centennial Bl. The area is NOT secure. Media do not stage in area!”

At 12:22 p.m they tweeted: “AVOID Centennial and Fillmore active shooter scene is not secure. Shopping Center shelter in place.”

The Denver Post reports that “three officers” have been injured attempting to confront the gunman. The CSPD has “shut down Centennial Boulevard between Garden of the Gods Road and Fillmore Street. Some businesses in the area are being evacuated.” CNN reports that there are civilian injuries as well and that police “are only aware of a single shooter.”