The American Life League’s (ALL) annual report that surveys all Planned Parenthood facilities in the nation finds the average salary of the 12 national leaders of the taxpayer funded abortion business is $345,338.

In particular, the salary of Planned Parenthood Federation of America’s (PPFA) president and CEO Cecile Richards was $590,928 last year – an increase of 40 percent since 2011. 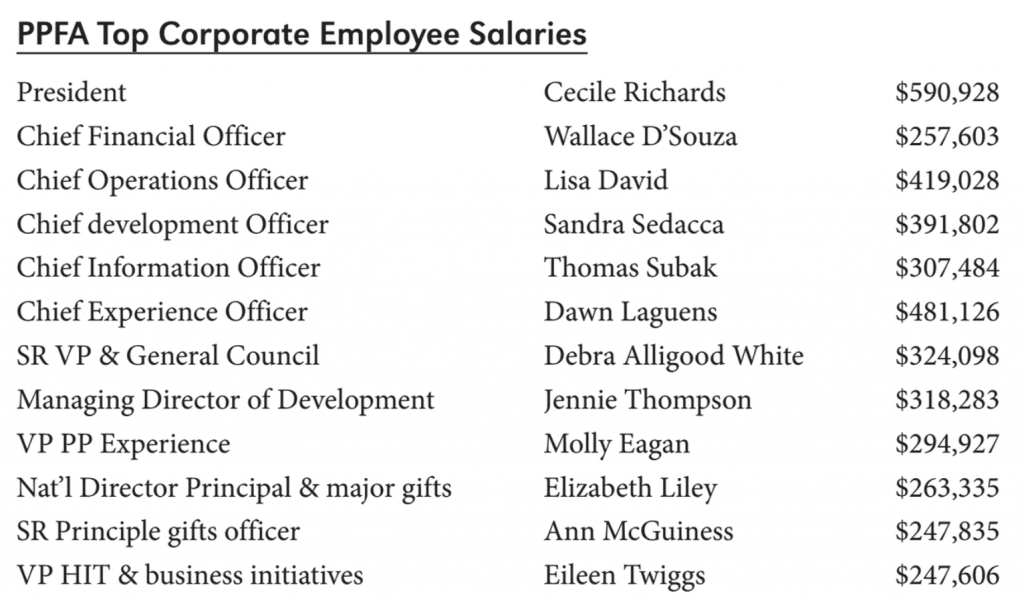 According to the report – which is generated by ALL’s program known as STOPP International – PPFA states it has 62 affiliates which brought in $1,066,438,338 in 2013. The organization’s affiliates are independent corporations that pay PPFA to use its name and, in turn, must adhere to operating rules established by PPFA.

Planned Parenthood affiliate CEOs with the top annual incomes are located in Minnesota, New York State, Washington State, California, Connecticut, Texas, Iowa, and Florida, and have a salary range of $272,470 to $372,375. The STOPP report indicates the CEOs saw a 14.6% increase in the average salary in the last three years.

“The question that must be raised by these numbers is how Planned Parenthood can continue to qualify as a nonprofit when it’s clear that there is obvious personal benefit financially to those doing this work,” writes Live Action News. “As this year’s undercover videos reveal, the abortion giant is making a profit, in part from selling body parts from aborted children, and in part from being funded by the taxpayers of this nation.”

In another report, the group Open Secrets’ Center for Responsive Politics found three Planned Parenthood affiliates – in the St. Louis region, in San Bernardino, California, and in Pennsylvania – had broken IRS tax laws by allocating more than 50 percent of their total spending to influence elections between the years 2008 and 2013.

Despite numerous investigative videos exposing Planned Parenthood’s apparent practice of selling the body parts of aborted babies on the open market, the organization maintained its taxpayer funding in the recent $1.1 trillion omnibus spending bill that was passed by the Republican-led Congress and signed into law by President Barack Obama.

The Senate approved a bill earlier in December that would eliminate Planned Parenthood’s taxpayer funding via the reconciliation budgetary process. The House will take that bill up in January. President Obama has vowed to veto the measure.