More than a century from now, on current trends, today’s concentration of CO2 in the air will have doubled. How much warming will that cause? The official prediction, 1.5-4.5 Celsius degrees per CO2 doubling, is proving a substantial exaggeration.

Professor William Happer of Princeton, one of the world’s foremost physicists, says computer models of climate rely on the assumption of the CO2’s direct warming effect that is about a factor two higher, owing to incorrect representation of the microphysical interactions of CO2 molecules with other infrared photons.

As if that were not bad enough, the official story is that feedbacks triggered by direct warming roughly triple it, causing not 1 but 3 degrees’ warming per CO2 doubling. Here, too, the official story is a significant exaggeration, as Professor Richard Lindzen of MIT, the world’s most knowledgeable climatologist, has demonstrated.

The wild exaggerations of both the direct CO2 warming and the supposedly more serious knock-on warming are rooted in an untruth: the falsehood that scientists know enough about how clouds form, how thunderstorms work, how air and ocean currents flow, how ice sheets behave, how soot in the air behaves.

In truth, we do not understand climate enough to make even an uneducated guess about how much global warming our adding CO2 to the air will cause. Other things being equal, we will cause some warming, but – on measurements to date – not much.

The national science academies and the UN’s climate panel have profitably contrived what the late Stephen Schneider called “scary scenarios” on the basis of inadequate knowledge. Etatiste politicians and bureaucrats have gone along with them.

A quarter of a century has passed since the panel first predicted how fast the world would warm. Measurements since then show the predictions were much overblown. But don’t take it from us. Ask any climatologist the following ten killer questions.

1: Where has the warming that the surface thermometer datasets now say has occurred in the past 18 years come from?

Yet the two satellite datasets show no global warming of the lower air for almost 19 of the 21 years of annual UN global-warming conferences. Even if CO2 had warmed the upper air as predicted (and the satellites show it has not), that warming could not have reached the surface through lower air that has not warmed. If the surface has warmed in the past couple of decades, as the surface datasets now pretend, CO2 cannot have been the cause.

In 2006 the late Professor Robert Carter, a down-to-earth geologist who considered global warming a non-problem, wrote in the Daily Telegraph that in eight full years (1998-2005), the Hadley Centre’s global temperature dataset showed no global warming at all.

Yet that dataset, which, like all the surface datasets, was recently adjusted to deliver the global warming that measurements did not show, now indicates a warming trend over those same eight years at a rate equivalent to more than 1.5 degrees/century.

2: Why, two years ago, did every surface temperature dataset agree with the satellites that there had been no global warming this millennium, and why, though the two satellites continue to show little or no warming, was every surface dataset altered in the two years preceding the Paris climate conference in a manner calculated to show significant warming?

3: Why do all the datasets, surface as well as satellite, show a lot less warming than predicted?

Why, even after the numerous questionable adjustments to the surface temperature datasets, has the rate of warming over the past quarter of a century been only one-third to one-half of the central prediction made by the UN’s climate panel in its 1990 First Assessment Report? 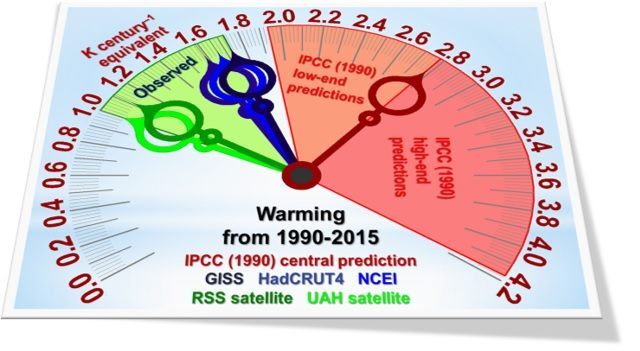 The startling temperature clock shows the UN panel’s 1990 predictions as orange and red zones meeting at the red needle representing its then central prediction that by now there should have been global warming equivalent to 2.8 degrees/century.

4: Why is the gap between official over-prediction and observed reality getting wider? 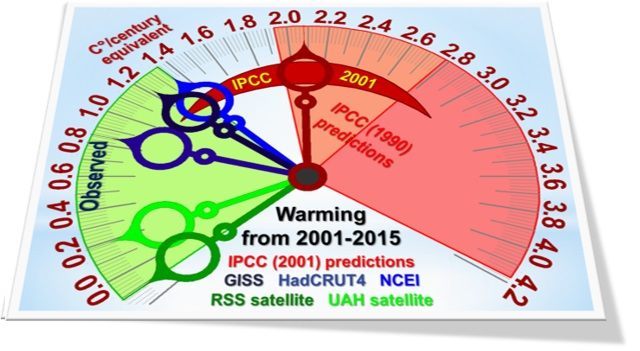 5: Why is the gap between warming rates measured by satellite and surface datasets widening?

It is legitimate to infer that the surface datasets have been altered to try to bring the reported warming closer to the failed but (for now) still profitable predictions.

6: Why should anyone invest trillions on the basis of official predictions in 1990 and in 2001 that differ so greatly?

Plainly, this is not the “settled science” we were told it was.

7: Why has the observed rate of warming, on all datasets, been tumbling for decades notwithstanding predictions that it would at least remain stable?

One-third of all Man’s supposed warming influence on climate since 1750 has occurred since the late 1990s, yet satellites show scarce a flicker of global warming in close to 19 years. And the rate of warming from 1950 to the present is lower than the rate from 1950 to any previous year in the past half-century.

Not only the amount but also the pattern of warming fails to match predictions. To the nearest tenth of one per cent, there is no CO2 in the air. Yet the UN’s panel said in 2007 that CO2 would warm the upper air 6 miles above the tropical surface at twice or thrice the surface rate. That tropical mid-troposphere “hot-spot” (one of us gave it its name) was, we were told, the undeniable fingerprint of manmade global warming. The existence of the hot-spot would prove manmade warming.

8: So, where is the missing tropical upper-air hot-spot?

Satellites do not show it. Millions of measurements taken by balloon-borne radiosondes do not show it. Why, if warming is manmade, has there been very little difference between measured surface and upper-air warming rates for decades?

Yet measurements from more than 3600 automated buoys throughout the ocean that dive down a mile and a quarter and take detailed temperature and salinity profiles every ten days show that the deeper strata are warming faster than the near-surface strata.

9: Why, if CO2-driven warming ought to warm the surface ocean first, is the ocean warming from below? And why has the ocean been warming throughout the 11 full years of the ARGO dataset at a rate equivalent to only 1 degree every 430 years?

As Hal Doiron, a  NASA thermal engineer, bluntly puts it: “When I look at the ocean I see one of the largest heat-sinks in the solar system. While the ocean endures there can’t be much manmade global warming.” And he had to get his heat calculations right or astronauts died.

Believers have silenced serious and legitimate scientific questions such as these by an organized, well-funded and remarkably vicious campaign of personal vilification against anyone who dares to ask any question, however polite or justifiable, about the Party Line. Most scientists, politicians and journalists have learned that they will have a quieter life if they just drift along with what most scientists privately concede is sheer exaggeration.

Believers also insist there is a “consensus” that manmade global warming is likely to prove dangerous.

10: Given that the authors of the largest ever survey of peer-reviewed opinion in learned papers marked only 64 of 11,944 papers, or 0.5%, as stating they agreed with the official “consensus” proposition that recent warming was mostly manmade, on what rational, evidence-based, scientific ground is it daily asserted that “97% of scientists” believe recent global warming is not only manmade but dangerous?

Millions die worldwide every year because they do not have cheap, clean, continuous, low-tech, coal-fired power. Given the growing and now flagrant discrepancies between prediction and observation that we have revealed here for the first time, the moral case for defunding the profiteers of climate doom and redeploying the money to give coal-fired light and heat to the world’s poorest people is overwhelming.

We are killing millions today with the scientifically baseless aim of saving thousands who are not at risk the day after tomorrow.