WASHINGTON—Former U.S. Solicitor General Paul Clement and First Liberty Institute argued Wednesday before the military’s highest court on behalf of Monifa Sterling, who was court-martialed in part for posting Bible verses in her personal workspace.

Sterling was a lance corporal in the U.S. Marine Corps. She noted that her coworkers had various items in their individual workspaces, such as inspirational messages. Sterling is a Bible-believing Christian, so in three places around her computer, she printed and posted, “No weapons formed against me shall prosper,” a paraphrase of Isaiah 54:17. 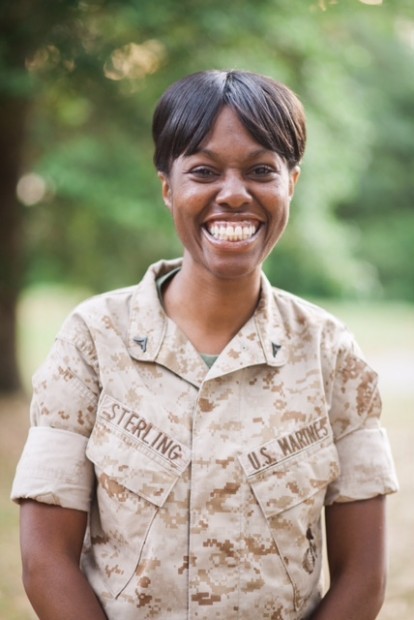 A staff sergeant ordered Sterling to remove those items from her workspace, though he did not order any other Marine to remove their non-biblical inspirational messages or other personal items. She repeatedly refused and, for disobeying orders, was subject to a court martial, which is a criminal prosecution in the military.

Sterling is a person of modest means and limited education but represented herself (“pro se” is the legal term) in the court martial, during which she claimed that she believed she had a religious-liberty right to display Bible verses.

She lost, and the case went on appeal. During this time, First Liberty Institute took on her case to defend Sterling free of charge. First Liberty brought into the case with them the world-class law firm Bancroft, including Clement as lead counsel.

Paul Clement has argued 83 cases before the U.S. Supreme Court.

Sterling’s case eventually went before the highest court for the military: the U.S. Court of Appeals for the Armed Forces. On Wednesday, that court heard arguments from Clement and from the government’s lawyers.

The case revolves around whether and how the Religious Freedom Restoration Act (RFRA—the federal law that protected Hobby Lobby Stores from Obamacare, and is now being claimed by the Little Sisters of the Poor) protects service-members in the U.S. military. That law provides a defense against the federal government when the government’s actions “substantially burden” a person’s exercise of religious faith.

The lower courts had ruled that RFRA did not apply in Sterling’s case and did so with an opinion that would make it very hard for any member of the armed services to ever claim RFRA protection while in uniform.

“The court below misinterpreted [RFRA] in a way that leaves religious freedom unprotected,” Clement began. He added that it was “troubling” that one of the Obama Defense Department’s arguments against Sterling expressing her religious beliefs at her duty station was — and an example of how narrow the scope that the government thinks RFRA has — that, “She could have invoked the Trinity at home.”

When Judge Margaret Ryan repeatedly challenged Clement as to why he believed ordering Sterling to remove Bible verses was a “substantial burden” on her faith, he responded that a burden on faith imposed by government is “substantial… anytime government imposes the possibility of criminal punishment.”

Ryan additionally challenged Clement on why Sterling needed to post Bible verses and seemed to argue that RFRA only applies if a person is either commanded to do something that violates their faith, or commanded not to do something their faith requires. He answered by quoting the precise words Congress wrote into RFRA’s text, which provides that a person can claim that they are exercising their faith regarding a faith-based action “whether or not compelled by, or central to, a system of religious belief.”

Chief Judge Charles Erdmann noted that, by necessity, the military is a “very structured society.” He said that Congress accordingly intended that “courts would give deference to the specific demands of military society for religious purposes,” quoting language from a legislative report on RFRA.

Clement agreed that some deference is generally warranted but went on to argue that RFRA still applies to the military, and that there is no military purpose served by ordering people to remove Bible verses.

The government’s lawyer, in turn, focused on arguing that Sterling had not effectively asserted RFRA during her court martial, waiving the right to raise it on appeal. When he later admitted that she did explicitly say in her defense during her trial that she believed she had a legal right to post Bible verses, but did not specify RFRA by name, Judge Kevin Ohlson asked incredulously, “Are you saying she was required to use the magic words ‘RFRA?’”

While Erdmann did not signal which way he was leaning on the case as a whole, he seemed to agree with Ohlson that courts do not demand “magic words” from non-lawyers exercising their right to represent themselves in court, noting that when citizens represent themselves pro se in court, “We give them more leeway.”

Sterling had other performance-related issues; she was not a model Marine. But the sole issue before the military’s highest court, which is subject to no higher judicial authority except the U.S. Supreme Court, is whether RFRA protections extend to members of the U.S. military in their daily lives as they perform their duties, the same as it protects all other Americans, including all other federal employees.

First Liberty attorney Michael Berry, who is director of military affairs at First Liberty Institute, immediately after argument concluded told Breitbart News exclusively, “Today was a historic day, not only for Lance Corporal Sterling, but also for religion in our military. The nation’s highest military court heard oral arguments in a landmark case that may determine whether RFRA applies to service members who engage in religious exercise.”

Berry went on specifically to thank Clement and two of his Bancroft colleagues, George Hicks and Michael McGinley, for taking this case pro bono, adding, “Paul Clement did an outstanding job making our case to the judges, and we are confident that the Constitution, the law, and military regulations are all on our side. Clearly, no service member should ever be court-martialed for displaying a Bible verse in their workplace.”

The case is United States v. Sterling. A decision is expected sometime later this year.