Micah Johnson who fatally shot five Dallas police officers and wounded six others scrawled a black revolutionary message on the wall of the building he was holed up in before being blown up by a police remote controlled explosive device. Images of him shortly after the explosion were recently revealed.

The gunman who killed five cops in Dallas scrawled a black revolutionary message in his own blood in the seconds before he died, Daily Mail Online can reveal.

Officials say killer Micah Xavier Johnson scribbled various messages on a nearby wall during a standoff with police.

Most were illegible but the letters ‘RB’ written in blood stood out.

‘We’re trying to figure out what those initials mean,’ said Dallas Police Chief David Brown on CNN‘s ‘State of the Union.’

Daily Mail Online has now learned that Johnson possibly was trying to write ‘RBG’ – but failed to finish the last letter before he was killed.

‘RBG’ is the name given to the red, black and green Pan African flag, a powerful Black Power symbol.

Significantly, Johnson had the Pan African flag as his cover photo on Facebook and is believed to have held the symbol in high regard.

A source said: ‘There’s lots of possibilities but RBG makes the most sense given Johnson’s Black Power interests and what motivated him to carry out these attacks. Maybe he was too weak, or just didn’t get time to finish writing it.’

You can read the rest of the story here.

Also from the Daily Mail:

Leaked images appear to show Dallas gunman Micah Johnson after he was killed by a remote controlled robotic bomb.

The Dallas police department have since defended their decision to use the robot after Johnson killed five officers at a Black Lives Matter protest on Thursday, saying it was a ‘last resort’.

The gruesome photographs appear to show Johnson’s lifeless body protected by an armored vest, along with a semi-automatic rifle among the rubble at a college parking lot where he was cornered.

DailyMail.com has contacted Dallas police for confirmation that the photos are of Johnson after the bombing.

You can read the rest  here. 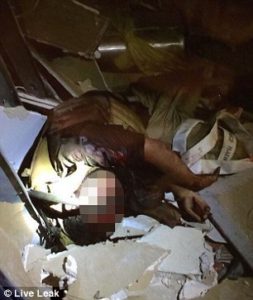 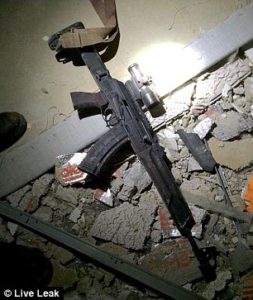