The U.S. Department of Defense is sponsoring articles urging Americans abroad to vote in the presidential election, on a website simultaneously running articles by a Democrat Party activist instructing the same ex-pats to “vote for Hillary Clinton in November” to help “stop Trump”.

The ads and sponsored content appeared just weeks after the George Soros-linked Avaaz network launched a similar campaign, claiming the 8 million “global citizens” are more likely to be “progressive” and vote for Hillary. A huge 88 per cent of them did not register in the last presidential election, and this “secret swing state” could win the race for the Democrat, analysis suggests.

The Federal Voting Assistance Program (FVAP), established and administered on behalf of the Secretary of Defense, is also pushing to register them, sponsoring numerous articles on the Local – an English-language news provider with bureaus in nine European nation, claiming to have more than 4.5 million monthly readers.

The Department of Defense is operating in accordance with federal law via its work with the FVAP, insisting it merely aims “to ensure Service members, their eligible family members, and overseas citizens are aware of their right to vote and have the tools to do so from anywhere in the world…”

However, the decision to advertise on the Local might not be interpreted as political neutral. Their sponsored articles, effectively funded by the American taxpayer, are currently appearing alongside an editorial written by Laura Shields, a spokesman for Democrats Abroad Belgium.

In the piece, Ms. Shields addresses the same readers and American ex-pats as the FVAP article, asking them: “Do [you] really want America to go backwards instead of moving forward on immigration, health care, education, the environment?”

“[If you] don’t want a Commander-in-Chief spouting this kind of divisive rubbish both at home and on the world stage, then you need to vote for Hillary Clinton in November”, the article adds. 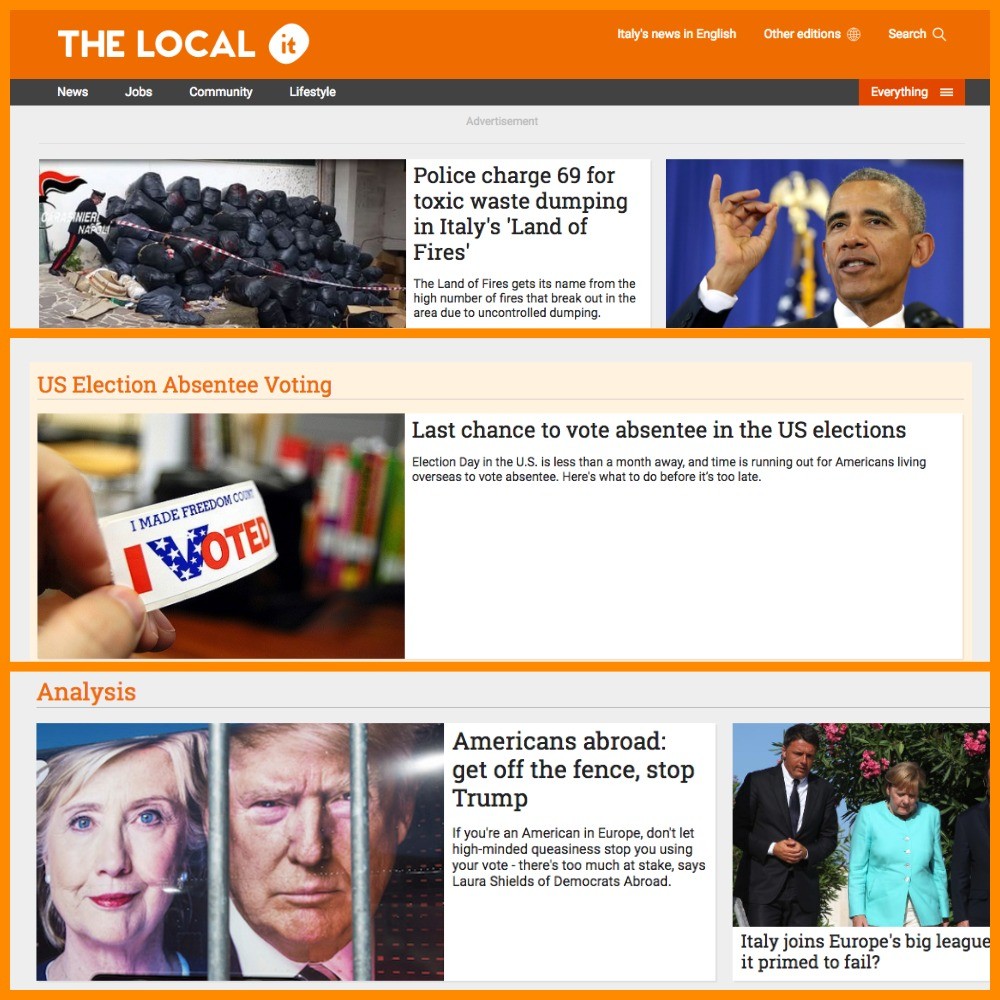 The two articles are currently appearing on the homepages of the Local Italy, Norway and other verticles

The anti-Trump article by the Democrat activist was published on the 26th of September, two and a half weeks before the sponsored FVAP articles appeared on the 13th of October.

There is no suggestion that the Department of Defense is working with the Democratic Party. But, taken together, on the same web page, the articles appear to give a strong endorsement of the Democratic candidate to Americans abroad. Breitbart London has not been able to identify FVAP ads on websites supportive of Mr. Trump.

The FVAP shares registration objectives with the Soros-linked Avaaz group, a registered U.S. charity and one the world’s largest and most powerful activist networks which recently announced an “October surprise that will end Trump” by registering “this massive untapped voting block”.

They argue that overseas voters are intrinsically left-leaning, such that mobilizing them will have a partisan effect on the impending election.

According to Avaaz, the potential voters are more likely to be “progressive” as 56 per cent of U.S. ex-pats in the UK, say, have masters degrees and overwhelmingly donated to Democratic candidates in the last three presidential primaries.

Furthermore, a recent study by Oxford University found that “America’s overseas voters… could decide the US presidency in 2016”. When combined, the potential 8 million voters around the world “would make up the 13th largest state”, campaigners say.

Although the FVAP claims to be targeting only servicemen and their families, they have placed their ads indiscriminately, appearing on nearly all of the nine national versions of the Local, and the articles are addressed loosely at “Americans living overseas”, not servicemen and women.

Whilst both Germany and Italy have a sizable U.S. military presence, nations such as Austrian and Sweden (where the ads appear) have negligible numbers of American troops.

“This article was produced by The Local and sponsored by the US Federal Voting Assistance Programme (FVAP)”, claims the sponsored content. “Still haven’t registered and requested a ballot? Some State deadlines have passed, but you may still have time to request an absentee ballot…” it adds.