Clinton hosted a rally at Delevoe Memorial Park in the predominantly African-American northwest part of Fort Lauderdale, which was her second visit to the neighborhood this week. On Sunday, Clinton made an appearance at New Mount Olive Baptist Church and at Betty’s soul food restaurant in the same neighborhood.

Right away, she took a shot at Trump after a heckler in the crowd shouted “Bill Clinton is a rapist.”

“I get sometimes a little overwhelmed by the fact that I love this country,” Clinton declared. “I think we already are great. I think we could be greater, and, you know, I am sick and tired of the negative, dark, divisive, dangerous vision and behavior of people who support Donald Trump. It is time for us to say, ‘No, we are not going backwards. We are going forward into a brighter future.’  So how do we do that? For the next seven days, we focus on what is important, do not get distracted or diverted – focus on the kind of country and world that we want to help create.”

Clinton rattled off her list of policy positions, which included pay equality, climate change, same-sex marriage, the war on terror, gun control, college debt, health care and taxes. Then she urged supporters to stage an “intervention” if they knew someone who was going to vote Trump.

“I want you to do me another favor, if you know anybody who says they are thinking of voting for Trump, I want you to stage an intervention,” Clinton said. “And I want you to talk to this person because unless they are a billionaire who avoided paying taxes for 20 years and lost a billion dollars running casinos, they do not have anything to gain from Donald Trump. In fact, they do have so much to lose. Every single issue we care about may not be actually listed on the ballot but make no mistake, it is on there. And talk to your friend or coworker and say, ‘You know, really, you may be angry about something that anger is not a plan. Don’t be used. Don’t be exploited. Stand up for what we can do together.’ Because that is what this election comes down to. It is about our future. It is about who we are as a country.

One of the reoccurring themes of Clinton and her running mate Tim Kaine’s appearances in Florida has been urging attendees to participate in the early voting process. It was on display again on Wednesday as the venue for the rally was next to an early voting center and giant “Vote Early” letters were place above a riser behind her podium. 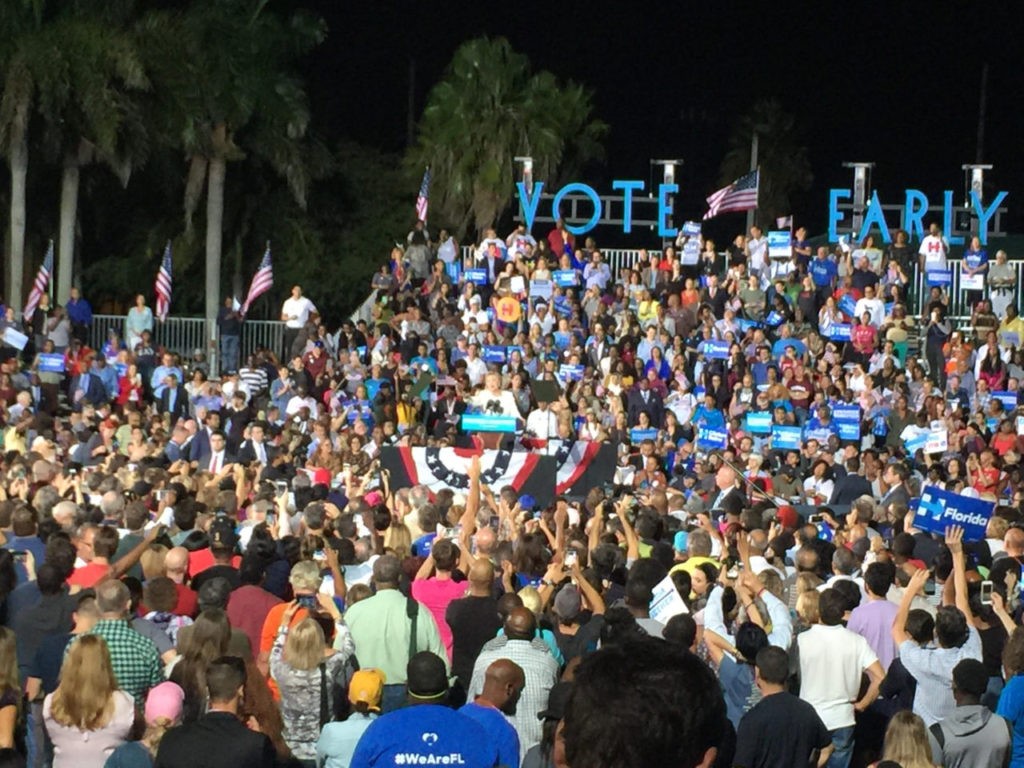 “[W]e know that we’ve got to turn out the vote. And what that means is that every one of you who can should vote early. How many of you have already voted?” she said to wide applause. “That does not surprise me because 4 million people in Florida have already voted, but there are millions more that we have got to get to go out and vote.”

Debbie Wasserman Schultz with an appearance at the Hillary event — and is boasting about her time as DNC chair pic.twitter.com/yH7BebSx75

Clinton’s Broward County visit was her third of day in the Sunshine State and one of her largest. Earlier in the day she held events in Dade City and Sanford. She was a little over an hour late for the Fort Lauderdale event.

Clinton finds herself losing ground to Trump in Florida in recent days according to polling and it is believed she will need a big turnout in Ft. Lauderdale’s heavily Democratic Broward County if she is to win the state next Tuesday.

Clinton’s three-stop swing in Florida is on the eve of a four-stop swing for Trump, who has events scheduled in Miami, Orlando and Pensacola on Wednesday and Jacksonville on Thursday.