President Barack Obama is on track to impose a last-minute regulation which would help foreign graduates capture good jobs at American companies, universities and hospitals that are sought by American-born graduates.

Obama’s expansion of the H-1B outsourcing program would take effect just three days before he leaves the White House. It can be seen as a direct challenge to incoming President Donald Trump, who promised to reform the H-1B program.

“I will end forever the use of the H-1B as a cheap labor program, and institute an absolute requirement to hire American workers first for every visa and immigration program,” he said in a March 2016 statement. “No exceptions,” he added.

Obama’s new regulation would increase the annual inflow of H-1B professionals, and also allow more foreign professionals to get the permanent Green Cards that allow them to stay  in the United States and eventually, to get citizenship for themselves and their family. The new regulation also benefits employers because it ensures more competition for jobs in business, academia, science, healthcare, technology, design and the media.

“This is an attempt to rewrite the Green Card [immigration] system through regulation,” said John Miano, an attorney who represents American workers hit by H-1B outsourcing. “The effect is to make an even bigger hash of the problems we have now,” he told Breitbart News.

Companies, universities and government agencies currently employ a population of more than 1 million foreign white-collar “guest workers,” who are usually hired without any chance for Americans to apply for the U.S. jobs.

These foreign professionals are not immigrants, but are temporary workers slated to return home to Europe, India, China or elsewhere after six or seven years. The population includes roughly 650,000 six-year H-1B professionals, plus several hundred thousand additional foreign college graduates holding L-1, B-1 or NAFTA visas, plus at least 120,000 foreign graduates in the expanded OPT program.

These foreign graduates are eager to take U.S. jobs, even at very low salaries, partly because the U.S. government supplements their salaries with the chance to win the very valuable reward of U.S. citizenship for themselves, their children, siblings and parents. That taxpayer-funded supplement allows companies to hire foreign workers for much less money than requested by young debt-burdened American graduates. The hidden subsidy for foreign graduates makes it difficult for American graduates to compete against foreign graduates for many jobs that don’t require direct cooperation with customers.

Obama’s pending regulation is beneficial, according to the regulation, because it encourages “skilled nonimmigrant workers contributing to the economy to continue seeking LPR [Green Card] status … Allows [foreign] dependents to enter labor market earlier and contribute to [guest workers’s] household income … [and] may expand the numbers of [Green Card] petitioners that are cap exempt and thus allow certain employers greater access to H-1B workers,” says the new regulation, which was drafted by the Department of Homeland Security, which runs much of the H-1B program.

“DHS has made an effort to provide additional flexibilities to as many high-skilled foreign workers as possible,” said the regulation, which downplays the concerns of Americans  professionals. “Employer demand for immigrant visas has increasingly outpaced supply in some categories and for some nationalities, resulting in growing waits for some sponsored employees to obtain their LPR [green Card] status … [resulting] in substantial inequalities and other hardships” for the foreign workers, says the DHS regulation.

The regulation dismisses public concerns about the impact of foreign workers on Americans’ wages, and downplays the regulation’s impact on Americans’ access to good jobs. “DHS estimates in the [regulation’s notes] that there will be about 92,600 dependent spouses and children that may be eligible for [one new feature, the] compelling circumstances employment authorization in the first year (the year with the largest number of eligible applicants) which represents approximately 0.06 percent of the overall U.S. civilian labor force,” according to the regulation.

On paper, there is an annual cap of 85,000 H-1B visas allowed for companies. But many companies get around the limit by working with non-profits who are allowed to import as many H-1B workers as they wish. The “cap exempt” loophole for non-profits means that universities, colleges and their affiliated hospitals and allied companies now employ roughly 100,000 H-1B professionals instead of 100,000 American professors, doctors, therapists and scientists.

The new regulation expands the “cap exempt” category by making it easier for companies to partner with non-profits, such as a university, and it allows state-run research agencies to hire an unlimited number of H-1Bs on behalf of local companies.

By getting the regulation established on Jan. 17, three days before Trump is inaugurated, trump’s deputies will be forced to go through a lengthy process to reverse the H-1B expansion. “The Trump administration would need to engage in full notice-and-comment rulemaking to do so, an effort that would take time and may not be a focus of the new administration given the president-elect’s other immigration priorities,” said Justin Storch, a manager at the Council for Global Immigration.

Although industry lobbying and media coverage of the H-1B program is focused on Silicon Valley’s outsourcing, the guest-workers are employed at many tasks by many famous companies, including  Caterpillar, McDonalds and CVS and at many little-known outsourcing companies.

For example, the federal government approved requests for 7,865 H-1B visas for healthcare jobs in 2015, including almost 700 therapists and 207 pharmacists, according to the MyVisaJobs.com website. Most of these requests were from non-profit operations, such as university hospitals and government agencies. 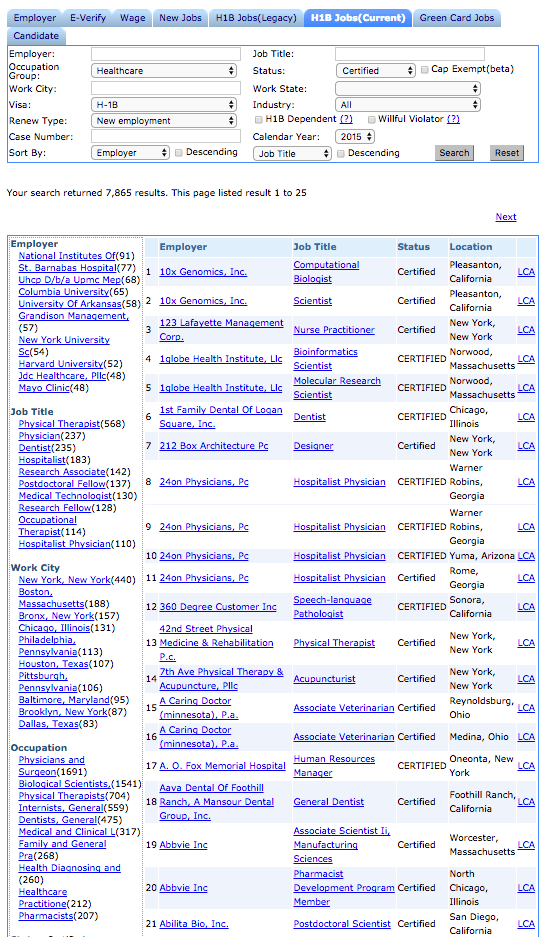 The foreign professionals are  also employed at federal laboratories.

The resident population of H-1B foreign professionals is roughly equal to the number of Americans who graduate from college with skilled degrees each year. In 2014, for example 358,000 Americans earned business degrees, 51,000 got degrees Information Technology degrees, 108,000 became engineers, 199,000 got health-related degrees, 21,000 got degrees in math or statistics, and 29,000 earned science degrees. That’s almost 800,000 new graduates, or roughly eight Americans for every six jobs held by a H-1B foreign professional.

Many of the H-1B workers get Green Cards once their employees start the bureaucratic process. That process sharply increases the resident population of of foreign-born professionals in the United States, so helping hold down Americans’ salaries across the economy. In Michigan, Wisconsin, and Pennsylvania, for example, the current population of up to 40,000 H-1B employees is augmented by roughly 75,000 foreign professionals who have gotten Green Cards via their employers since 1990.

The inflow of extra white-collar temporary workers is being accompanied by a sharp increase in the numbers of unskilled migrants seeking blue-collar jobs sought by Americans. Since late 2012, for example, Obama has provided work permits, or school slots, to perhaps 300,000 migrants from Central America. If allowed to stay, those migrants will cost Americans roughly $200 billion in taxpayer funds over the next 75 years.

In the first half of 2015, Obama also allowed more than 900,000 legal immigrants in the country. That mass immigration delivered almost 1 new immigrant to the labor market for every two young Americans who begin looking for work in 2015, or one new immigrant for every two American children born that year.

The 2015 inflow of almost 2 million immigrants, plus the 1 million blue-collar and white-collar guest-workers, added up to three new foreigners  for every four Americans who enter the workforce.

In general, the huge inflow of immigrants and guest-workers aids CEOs and investors by lowering the price of labor, so boosting profits. This transfer shifts roughly $500 billion per year from Americans’ paychecks up to managers’ and investors’ accounts, according to George Borjas, a Harvard economist.

However, Trump’s reform plan could largely eliminate the wage-cutting impact of the H-1B programs. In August 2015, for example, he issued a reform plan saying:

We graduate two times more Americans with STEM [science, technology, engineering and math] degrees each year than find STEM jobs, yet as much as two-thirds of entry-level hiring for IT jobs is accomplished through the H-1B program. More than half of H-1B visas are issued for the program’s lowest allowable wage level, and more than eighty percent for its bottom two. Raising the prevailing wage paid to H-1Bs will force companies to give these coveted entry-level jobs to the existing domestic pool of unemployed native and immigrant, instead of flying in cheaper workers from overseas. This will improve the number of black, Hispanic and female workers in Silicon Valley who have been passed over in favor of the H-1B program. Mark Zuckerberg’s personal Senator, Marco Rubio, has a bill to triple H-1Bs that would decimate women and minorities.

Since 2009, Obama has grown the number of guest-workers in the United States, partly by allowing the spouses of temporary workers to work in the United States. In 2013, Obama also pushed a “Comprehensive Immigration Reform” that would have allowed an unlimited number of foreign graduates to get work permits in the United States by first paying tuition fees to U.S. universities. That “staple” plan was derailed in 2014 by voters eager to reduce annual immigration, and then blown up in 2014 by GOP primary votes in the Seventh District of Virginia, who ejected the GOP’s Majority Leader, Rep. Eric Cantor. In the 2016 campaign, Democratic candidate Hillary Clinton supported a similar plan to “staple” work permits to postgraduate degrees.

So, far, however, Trump has not chosen a person to run the Departments of Labor or the Department of Homeland Security, which manage the H-1B and other guest-worker programs.

Trump is also facing opposition from business groups and their GOP allies who strongly back the guest-worker programs, which bring in roughly 1 million foreign blue-collar and white-collar workers each year.

For example, in 2late 2015, House Speaker Paul Ryan effectively quadrupled the size of the H-2B program, which brings in 66,000 blue-collar workers for jobs in the landscaping, hotel, vacation and forestry businesses each year. Some of those workers are also used to replace Americans in high-wage construction jobs. that expansion expires in December, unless Ryan extends the H-2B expansion.

Overall, Trump’s immigration reform plans are expected to open up jobs to young Americans and to nudge up Americas’ salaries, according to a Wall Street study.