WASHINGTON, D.C. — President-elect Donald J. Trump’s inauguration will have less official celebration throughout the day and evening so he can focus on getting right to work on behalf of the American people, officials involved in the planning process tell Breitbart News. The inauguration itself will be less focused on the donor class and ritzy Washington insiders as in years past and more focused on the regular working class people across the country for whom Trump has become the champion. 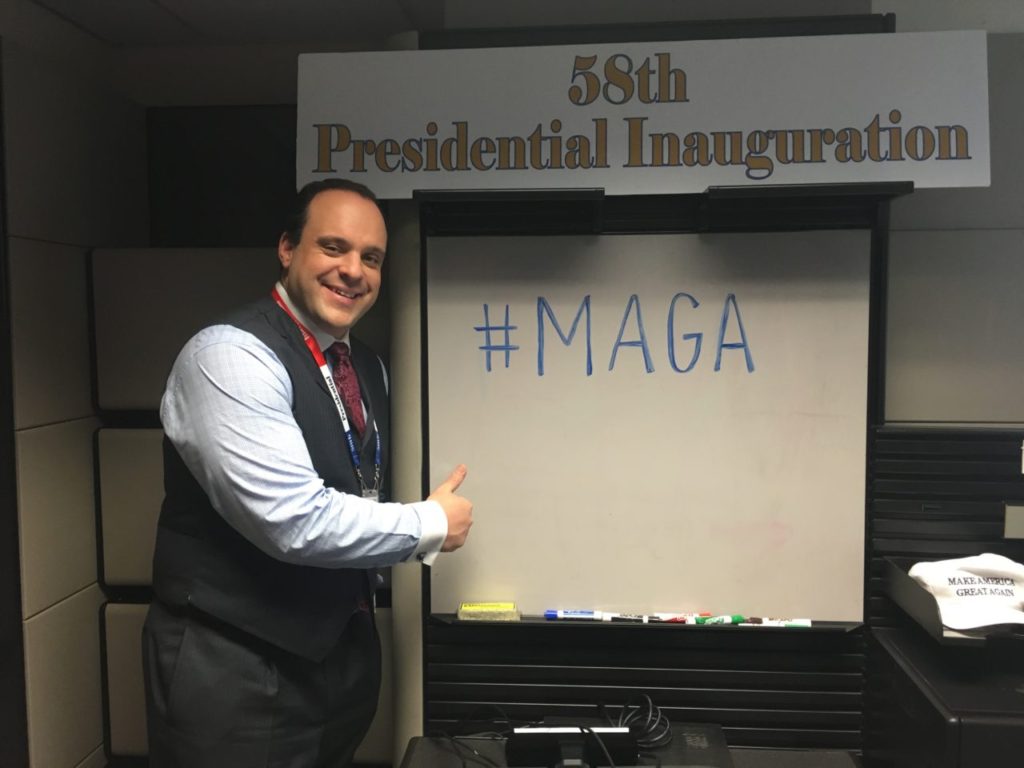 “What does that mean? It’s all about the people,” Epshteyn said. “It’s not about any one celebrity or any one entertainer or about any of those folks sipping champagne and cocktails somewhere in the Hamptons or in Beverly Hills. It’s about the American people. We’re so proud of the amount of support and outreach we’ve received from all over the country. This inaugural will represent the people. That’s one, and two it’s about getting to work right away.”

So, logistically, what does this all mean? Specifically, Epshteyn says, Trump will only have three official inaugural balls as compared with 10 separate balls for Barack Obama’s 2009 inauguration.

“There will three balls instead of 10, as there were in 2009 with President Obama because this president—Donald J. Trump—is all about getting to work and making sure Americans are safe in their homes, safe in their jobs,” Epshteyn said. “Look at the news that just came out this week: 8,000 jobs being brought to America between Sprint and OneWeb.”

Alex Stroman, the deputy director of communications for the PIC, explained that President Trump will also continue the official Commander-in-Chief Inaugural Ball—a tradition started by George W. Bush and continued by Obama—and expand that. Previously, that ball had just enlisted members of the U.S. military in attendance. Trump is going to expand that ball to include first responders like police, firefighters and EMTs—and will also allow in veterans, military families and wounded warriors.

Usually a president will come in and they’ll have 10 official balls in addition to the unofficial balls that happen. President Obama had 10 in 2009, President Bush in 2001 and 2005 I believe had nine balls each in addition to the unofficial balls that took place. This president is going to attend three balls. We only have three official balls. We have two that are like the official balls, and then we have a third—it’s a tradition President Bush started in 2005 with the Commander-in-Chief ball, President Obama continued it and President Trump is also continuing it but expanding it. This ball, the general public can’t get a ticket. Historically, it’s only been active duty members of the military—specifically enlisted members. This year, we’ve expanded it to include military families, wounded warriors, veterans, and first responders as well. So you’ll have police, firemen, who will all be there. It’ll be a thank you for them for their service to our country.

Stroman explained that the extra focus is because Trump has an enormous amount of respect for all those who put their lives on the line to protect the country. He went on:

I think you’ve seen that [Trump’s respect for the military, police, veterans and first responders] throughout the president-elect’s campaign. Some of my favorite photos are when you see every time he made a stop at his airplane, he’d stop and take photos with the police who were protecting him. This is a president, he’s vowed to be a law and order president. He respects our police, he respects our military, he respects those who put their lives on the line whether it’s firemen or EMTs or police every day. He made that a point throughout his campaign to honor these folks, veterans, military, et cetera, who put their lives on the line for our country. It’s a way to, in one of his first acts as president, to thank those who do that.

Another change from previous inaugurations, Stroman said, is that the parade from the Capitol to the White House on Inauguration Day is expected to be shortened to just an hour or so. That will allow Trump to get right to work at the White House on day one, before he goes to the balls later that night. Stroman told Breitbart:

Again, the thinking, Stroman stressed, is that Trump wants to honor tradition while also wasting no time helping protect Americans’ safety and jobs. He said:

The president-elect is about honoring the traditions, and this is a ceremony about the American people more than any one person. You’ve seen some previous inaugurations are really lavish, you have a lot of long events, a lot of big events. This president-elect is somebody who’s ready to get to work. So if you look at the Carrier deal, look at Sprint today, look at the Boeing and Lockheed Martin stuff. He’s already—and this is impressive with our leadership, at least in modern times, in that there’s a transition and president-elect who is already getting to work before he even takes office. You’re going to see that reflected in the inauguration itself.

Epshteyn added that while Trump’s inauguration is a “celebration,” the focus is going to be on immediately getting to work on behalf of the American people. He said:

These exclusive interviews with Epshteyn and Stroman came as PIC staff, including press secretary Ali Pardo, provided Breitbart News with an exclusive tour of the PIC offices in the General Services Administration (GSA) building near L’Enfant Plaza in Washington, D.C. The sprawling offices represent the beachhead of Trump’s looming takeover of the federal government, a culture very different from business as usual in government offices in Washington, D.C. 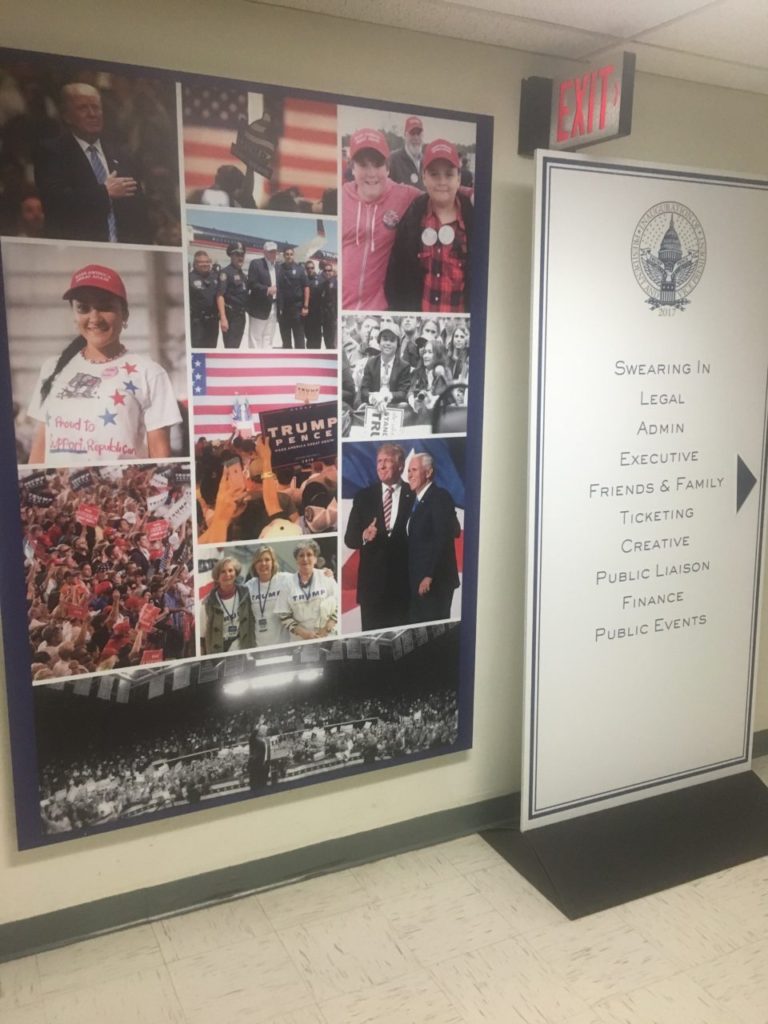 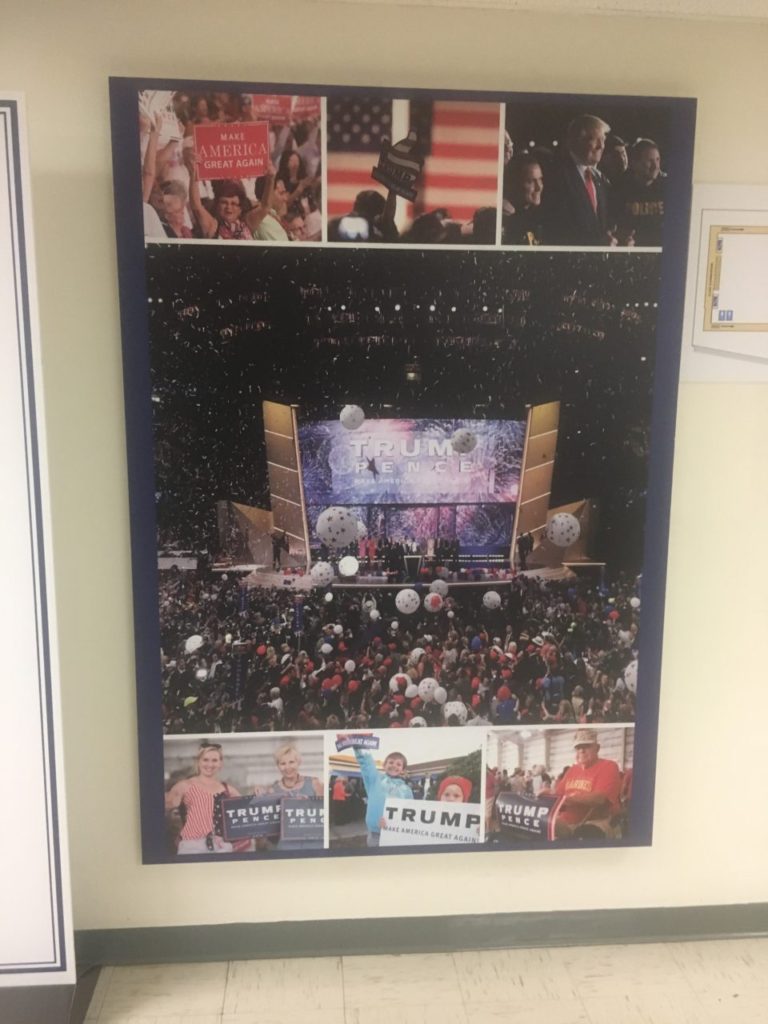 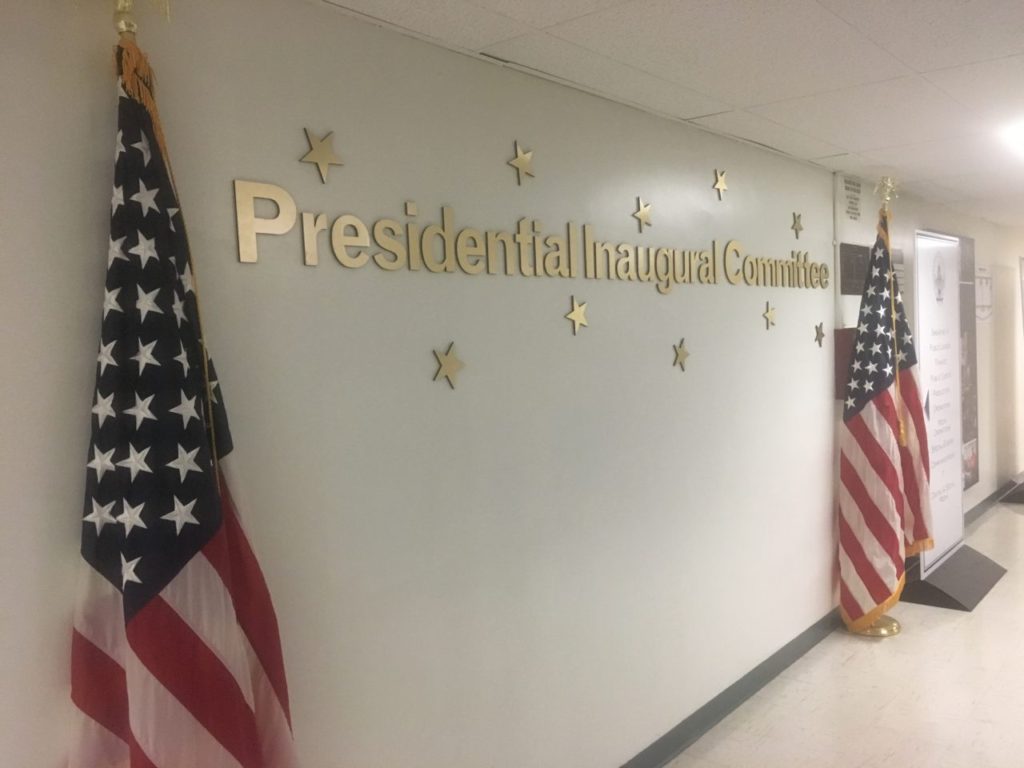 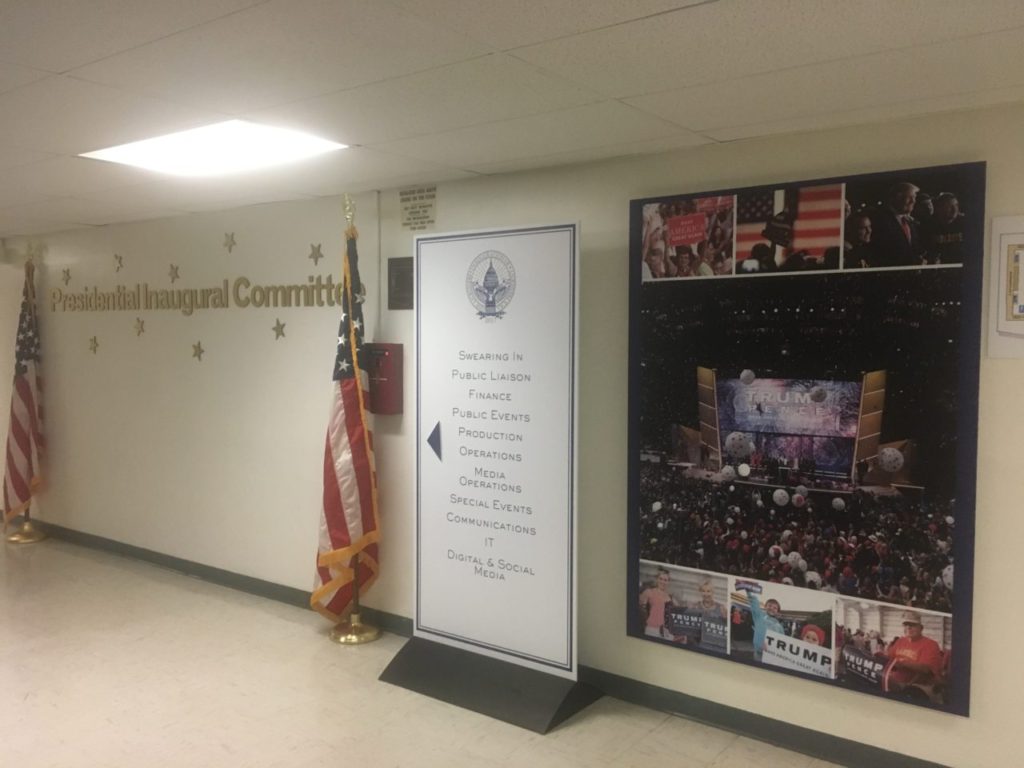 The halls of the GSA building’s PIC corridors are decorated with Trump trophies, including a series of photo spreads of his rallies. A white board in one of the government offices has #MAGA—the Twitter hashtag for the “Make America Great Again” campaign slogan—scribbled on it, while the official inaugural seal of the incoming president and vice president is on each of the doors. Make America Great hats line desks inside the communications office, as well. 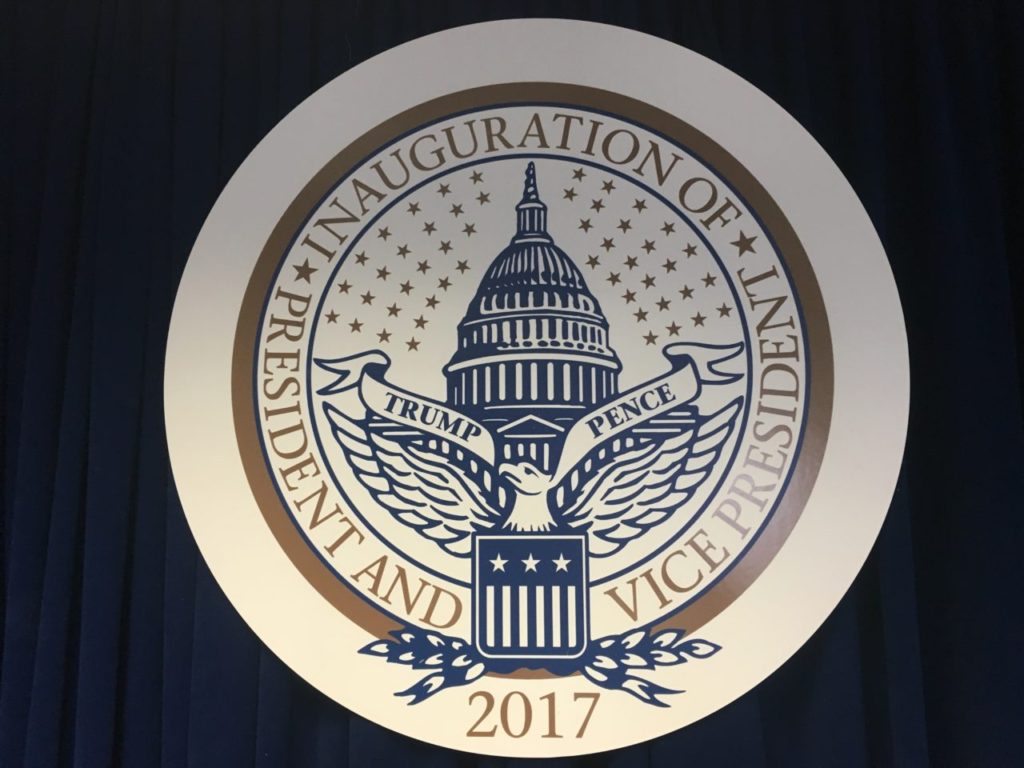 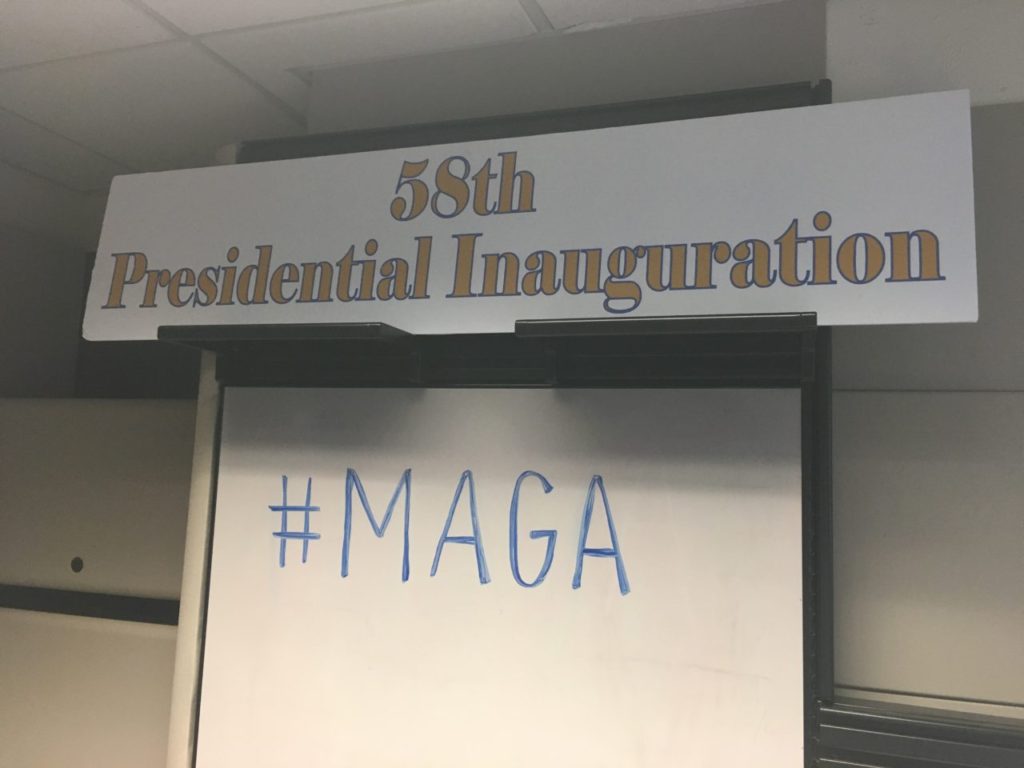 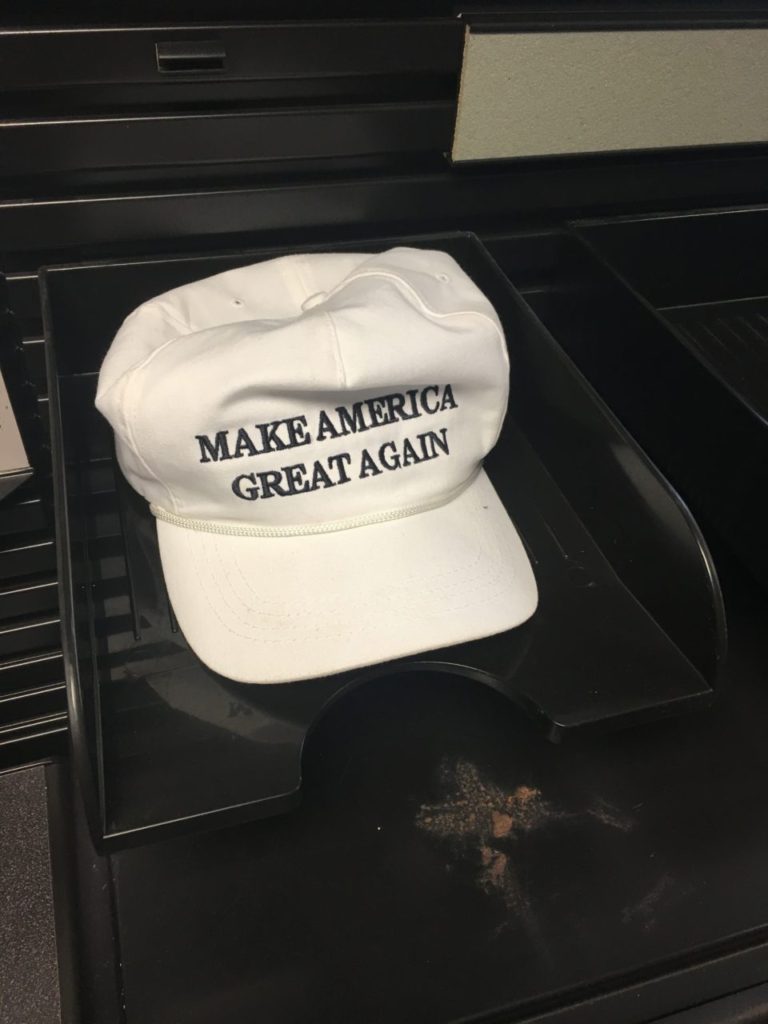 In addition to the Trump rally photo spreads showing thousands of his supporters, the hallway is adorned with a giant ceramic star-spangled elephant—complete with red legs and white stars inside its blue body. 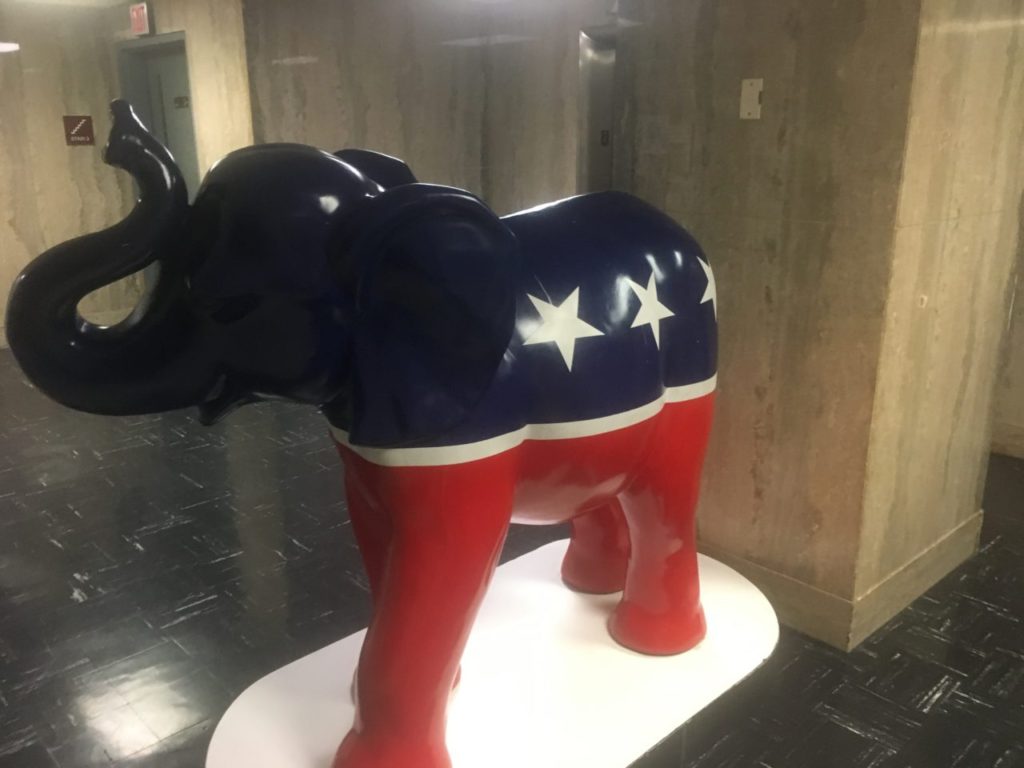 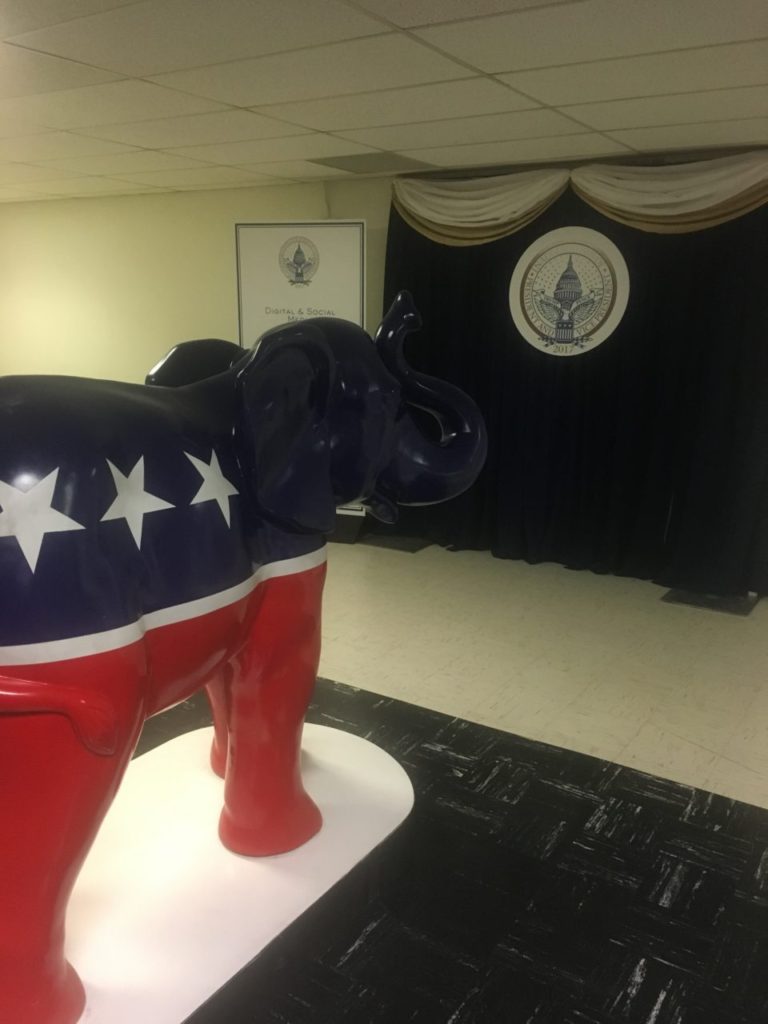 Stroman notes that the building and the space technically are not funded by taxpayers, except for minimal building costs from the GSA. He said:

The entire building is two city blocks long on each side. We’re in a GSA building, a GSA location, and the GSA for the last couple inaugurals by statute have given PIC access to the building for office space to support. They do the same thing for the transition. It’s a fairly new thing. They come in and they allow us to operate inside the government building, but we’re a 501(c)4 so we’re a not for profit. It’s not a government entity. Very few taxpayer dollars are expended except for allowing us to be in a building and turning on the lights and giving us temporary office furniture that’s pretty low key.

Since the PIC is a nonprofit charged with putting together Inauguration Day and week, it fundraises—without lobbyists, Stroman says, since the president-elect wants no lobbyists involved—to pay for the events. He went on to explain:

We fundraise, we’ve capped donations at a million dollars. No funds from lobbyists, but we do take individual and corporation dollars—but the interesting point about that and the reason why that’s so important is because the underwriters are the ones who allow the general public to come and attend these and make sure we aren’t using taxpayer dollars for the ceremony. It’s a group of folks who underwrite the expenses of the inaugural committee and the parade and the stands and the security and the fencing and renting the ballrooms and these people allow it so we can keep prices free or cheap. I wouldn’t say that’s unique to ours but people kind of think the inauguration itself is kind of exclusive. But the inauguration is for the people and that’s something this president especially has given the charge to this committee to make sure. The tickets along the parade route, the majority of the parade route is open to the public. We’ll do a welcome concert on Thursday evening and while there will be ticketed guests the majority of those tickets will be free. And then in addition to the free tickets, you just have to request a ticket, there will be places for the public to watch if they’re just driving up to Washington. If you’re driving up, people can come to Washington and celebrate this historic inauguration, celebrate this president and do it with minimal cost.

Stroman noted that the role of the PIC is to help the transition have a successful Inauguration Day so that President Trump’s first 100 days can get off the starting block without a hitch—and he can get rolling into setting up the government. The PIC deputy director said:

The Presidential Inaugural Committee’s role is to plan any event outside of the actual swearing in ceremony. It’s to plan the balls, the parade, any kind of private events, family events, and then also does have a hand in the swearing in ceremony itself. It represents the president-elect’s and the vice president-elect’s interests in the ceremony itself as well, but also everything surrounding the inauguration. It’s interesting because our charge from the president-elect is to help set up that kickoff point to that first 100 days. You have the transition that takes place immediately after and through the inauguration itself with the selection of cabinet appointees and kind of setting the initial messaging. Then you have us, whose job is to be that first picture from the second he raises his hand to take the oath of office through the rest of that day and that weekend. So they all kind of three work together. You have the presidential transition, the inaugural committee, and that first 100 days aspect of the administration. I feel it’s our job to tie those three areas together, the transition and the kickoff of the first 100 days which is what the inauguration is.

Expectations, he added, are that about a half a million people—maybe more—might make their way to Washington to witness the historic event in person. Stroman went on:

We haven’t put out any official numbers on our end here at PIC, but planners outside of PIC are saying probably a half a million or so. But I think the enthusiasm whether it’s folks who make their way to D.C. or folks watching from around the world, I think it’s going to be the biggest event ever. If you look at his rallies where he tens of thousands—hundreds of thousands—of people at rallies all across the country, the amount of interest you’ve seen around the world in the first person to be non-military and no government service ever elected. So the interest all around the country and around the world is high.

Pardo noted, too, that the PIC’s media team is working overtime to ensure that the hundreds of millions of Americans who won’t be able to make it to Washington for the inauguration festivities—and the billions worldwide—can get a front row seat to the action using media tools.

“We’re also making sure we’re providing that for people who aren’t here, through technology—we’re being innovating,” Pardo said. “We’re trying to make sure everybody across the country has a seat to this historic day. Anyone can access it whether it’s on social media or watching it on the news, but we want to make sure everyone has the ability to watch this historic event across the country and around the world.”