The flood of legal and illegal immigration is overcrowding the schoolrooms which Americans built for their children, according to government data published by the non-partisan Center for Immigration Studies (CIS).

While working-age Americans face increased workplace challenges in a global market from overseas workers, professionals, and researchers, CIS shows how Americans’ children are losing classroom resources to the children of migrants invited by the federal government.

Immigrants and the children of immigrants comprise 93 percent of the student population Miami’s Northeast Dade County, 91 percent in Jackson Heights plus North Corona near New York City, 85 percent in Westpark Tollway, in Houston, Texas 78 percent in Annandale and West Falls Church, in northern Virginia. The districts are dubbed “Public Use Micro Areas.” and average roughly 20,600 students.

Nearly one-in-four students enrolled in taxpayer-funded schools in 2015 were from “an immigrant household.” In 1980, that share stood at only one-in-thirteen.

Over 59 million migrants entered the U.S. in the past five decades. The foreign-born population stood at roughly 42.4 million, or 13.3 percent of the U.S. population, in 2014, according to a 2015 CIS estimate. The Census bureau predicts that the foreign-born population is set to increase 85 percent by 2060. The U.S. is the most popular destination in the world for immigrants and attracts 20 percent of all the world’s migrants.

These are extraordinary numbers. But for decades, the political class has permitted mass immigration and looked the other way when it came to enforcing immigration laws on the books.

This has a profound effect on public schools. In California alone, nearly half of the students in public schools were from migrant households in 2015, a CIS table shows: 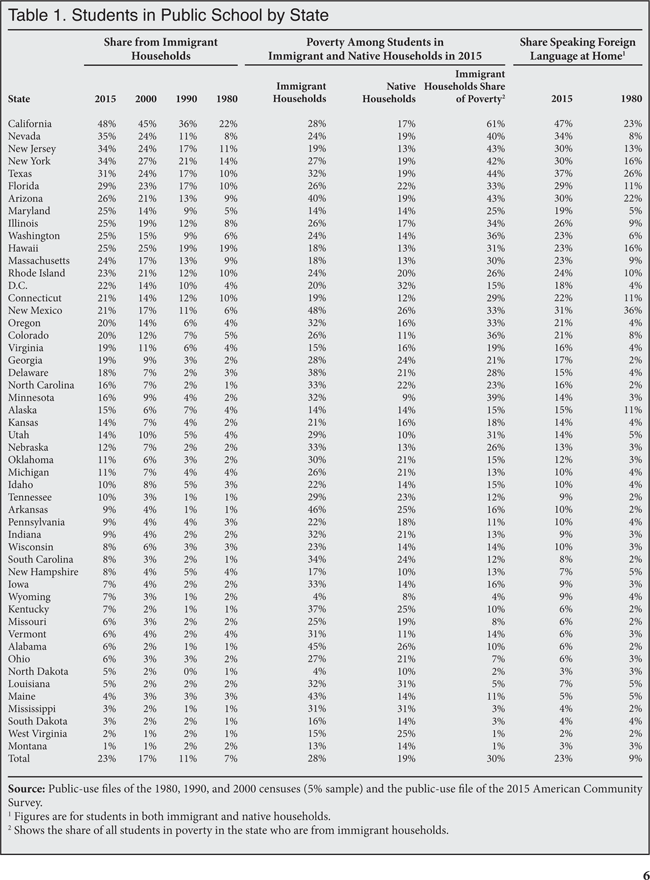 “The number of children from immigrant households in schools is now so high in some areas that it raises profound questions about assimilation,” the CIS report states. “What’s more, immigration has added enormously to the number of public school students who are in poverty and the number who speak a foreign language. This cannot help but to create significant challenges for schools, often in areas already struggling to educate students who come from disadvantaged backgrounds.”

A handful of countries, and Mexico in particular, send migrants and their children to the U.S., bringing foreign languages with them that require special attention from American schools: 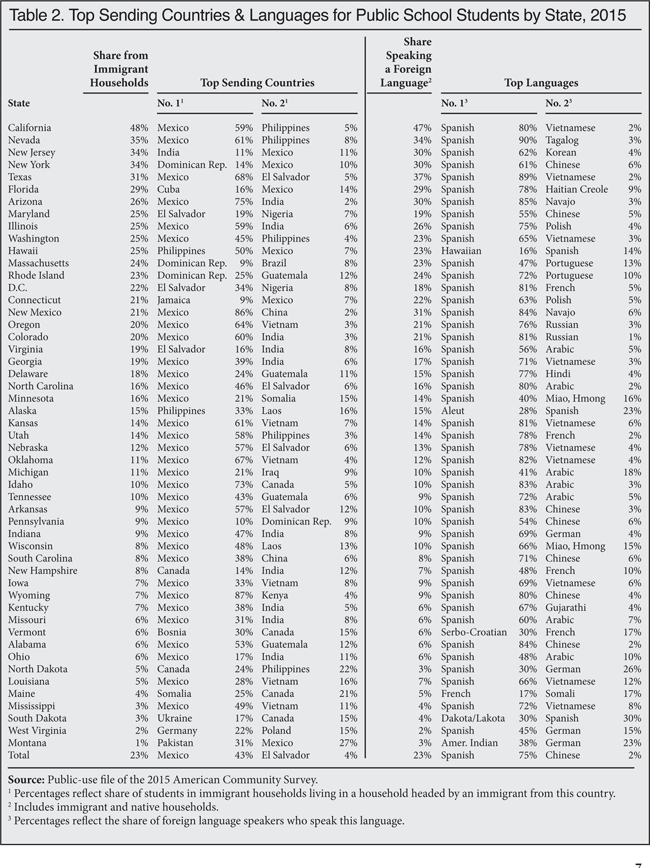 The numbers concerning students of Mexican backgrounds is not surprising in light of Mexican attitudes about immigration. A 2013 poll found that 66 percent of Mexicans believe the U.S. government has no right to limit immigration. A majority, or 52 percent, said Mexicans have “a right” to be in the United States. Another 88 percent of respondents said it is fine to enter the U.S. illegally if one needs money. Over half of Mexicans, or 56 percent, said they had friends or family who tried to immigrate to the U.S. illegally. As Mexican migrant and current U.S. citizen Jorge Ramos explained to an awards audience in Spanish: “This is also our country. Let me repeat this: Our country, not theirs. It is our country. And we are not going to leave. We are nearly 60 million Latinos in the United States.”

The demographic shifts taking place in many school districts are in part politically engineered, and took place after the passage of the Immigration and Nationality Act of 1965. In 1965, America’s demographics stood around 84 percent European, four percent Hispanic and one percent Asian. After lawmakers scrapped the European-origin quota system, demographics began to shift: Over half of all migrants who came to the U.S. after 1965 were Hispanic and one quarter were Asian. Nine out of ten migrants who arrived in the U.S. before 1965 came from Europe. Currently, nine out of ten migrants hail from the Middle East, Latin America, Asia, or Africa. By 2015, those of European ancestry comprised roughly 62 percent of the total population, while Hispanics made up 18 percent, and Asians six percent.

Ongoing waves of illegal immigration, enabled in part by Supreme Court Justice William Brennan’s footnote tacked onto majority opinion in the Plyler v. Doe (1982), are also straining safety nets and institutions. CIS estimates that as many as one-third of students from migrant households enrolled in public schools were children of illegal alien parents in 2015.

The federal government imposes a massive, unfunded mandate on school districts around the country by forcing American parents to divert funding from their own children to educate roughly 3.62 million foreign-born students and children with one or two legal migrant parents, including children of illegal aliens. The Federation for American Immigration Reform (FAIR) estimated that the mandate forces citizens to pay $59.8 billion every year.

Approximately one in ten students enrolled in public schools is designated as Limited English Proficiency (LEP), and their academic performance has been described as “abominable”: The number of eighth to twelfth grade LEP students performing Advanced work rounds to zero percent. Many do not perform at “basic” or even “below basic” levels, and few speak English even after years of attending U.S. schools.

In the 200 PUMAs with the highest poverty rates in the country, where poverty among students averages 46 percent, nearly one-third of students are from immigrant households… In addition to adding large numbers of students in poverty and for whom English is not their first language, immigration also creates significant challenges for schools because immigrants have lower incomes, making it unlikely that tax revenue grows correspondingly with enrollment in areas of high immigration.

The political establishment’s decades-long refusal to curb illegal immigration, along with its insistence that states and local communities subsidize it by funding the education of illegal aliens and their children, poses a grave danger to American schoolchildren. Joshua Wilkerson would still be alive if illegal aliens were not permitted to attend school. An illegal alien classmate tortured and murdered Joshua on November 16, 2010 before setting his body on fire in what his mother described as “our family’s 9/11 terrorist attack by a foreign invader.”