Former San Francisco Mayor Willie Brown suggested that the Republican foreign policy establishment may want to see President Donald Trump impeached after dining with two of its most prominent members.

“The Republicans, at that level, do not want Trump in the Republican Party. They don’t want that burden,” Brown told Politico’s California Playbook this week when asked what his main “takeaway” was from that dinner. “And I think that’s going to translate into impeachment.”

Just a week after Brown wrote about his dinner, Never Trumper Bill Kristol, a prominent neoconservative who has also been one of embattled national security adviser H.R. McMaster’s fiercest defenders, revealed that he is plotting to oust or primary Trump.

According to a New York Times report, Kristol “said he had begun informal conversations about creating a ‘Committee Not to Renominate the President.’”

“We need to take one shot at liberating the Republican Party from Trump, and conservatism from Trumpism,” Kristol added.

McMaster’s team recently expressed his team’s “disapproval” of Trump’s actions abroad to the Associated Press, undercutting Trump in the process yet again. For instance, in a July 10 Associated Press report, writer Vivian Salama noted that “McMaster did not attend the bilateral meeting with Putin” at the G20 Summit—“only Trump, Secretary of State Rex Tillerson and a translator made up the U.S. side”—and Trump relied on Tillerson to document the meeting because he was reportedly concerned about potential leaks.

“Foreign and U.S. officials said the Russians recommended that a note taker be present in the bare-bones official bilateral meeting,” Salama wrote for the Associated Press. “But Trump, who has repeatedly expressed concern over leaks, refused, instead relying on Tillerson to document the meeting.”

According to the report, “McMaster and other national security aides also advised the president against holding an official bilateral meeting with Putin” while “McMaster expressed his disapproval of Trump’s course to foreign officials during the lead-up to his trip to Germany.”

On May 10, the day after Trump fired his FBI director James Comey, McMaster and his deputy Dina Powell reportedly attended Trump’s meeting with Russian Ambassador Sergey Kislyak. Soon after, legacy media outlets, based on leaks, reported that Trump had given away top-secret information to the Russians while calling former Comey a “nut job.” A recent Harvard-Harris poll found that a majority of Americans believe the Deep State is leaking information to “unseat” Trump while nearly two-thirds in the same poll felt there was a campaign to “delegitimize” Trump.

Trump was incensed when those inside his administration leaked details about his meeting with Kislyak. After tweeting that he had every right as president to reveal information he thought was necessary to combat terrorism, he tweeted: “I have been asking Director Comey & others, from the beginning of my administration, to find the LEAKERS in the intelligence community.”

When the Associated Press reporter, Vivian Salama, later went on Brian Williams’ The 11th Hour show on MSNBC after she wrote her July 10 article, Williams (wink, wink!)–referring to headaches the White House’s human resources staffers must deal with due to the infighting among Trump’s staffers–told Salama that it seems like Trump has “an HR problem.”

Those like Max Boot, a Never Trumper who was one of the first to suggest that Trump could be impeached after he fired Comey and thus allowed Democrats to pile on even more, has been ferociously defending McMaster along with other Never Trumpers like Kristol and Dan Senor.

To all Republican candidates:
Throw Trump under the bus. It would be good for the party and country. And it couldn't happen to a nicer guy.

To all Republican candidates:
Throw Trump under the bus. It would be good for the party and country. And it couldn't happen to a nicer guy.

Senor, another prominent and nasty Never Trumper who has tried to undermine Trump since the 2016 election cycle, even tweeted a pro-McMaster article from the National Review, which smeared Trump’s supporters as bigots during the 2016 election while infamously publishing a “Never Trump” edition of its flailing magazine.

"Those who want to see the Trump admin succeed ought to work w/the nat'l-security adviser, not against him" https://t.co/6welEKFwFC via @NRO 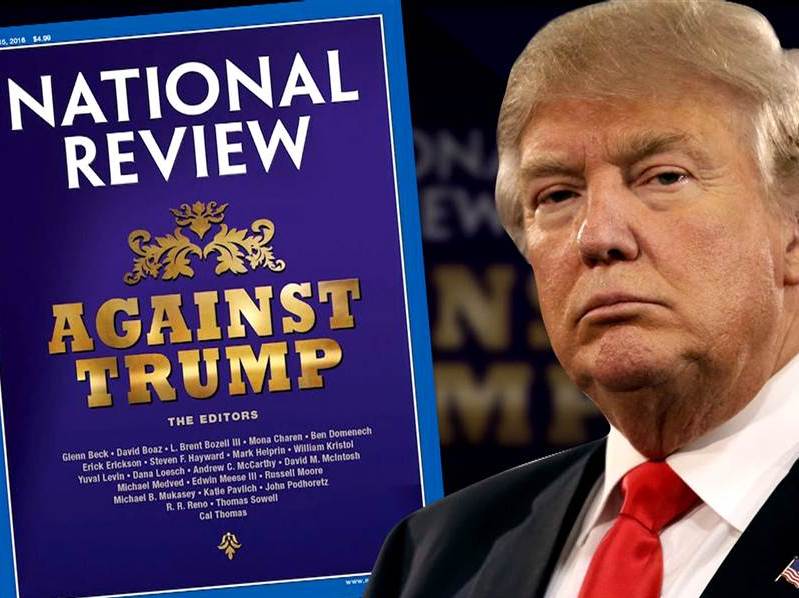