The Trump administration declared victory Sunday when it announced that it had secured a $285 million cut to the U.N. budget for 2018-9 — but even with that cut  the U.S remains far-and-away the top contributor to the bloated international organization.

“The inefficiency and overspending of the United Nations are well known. We will no longer let the generosity of the American people be taken advantage of or remain unchecked,” U.S. Ambassador Nikki Haley said in a statement Sunday.

Haley, while hailing a “historic” reduction in spending, admitted that it was only a step “in the right direction,” and promised to continue to look at ways to increase the efficiency of the U.N.

It is far from clear to what extent, if at all, the budget cut will affect the U.S. contribution — although as the largest financial contributor to the U.N. it would presumably be decreased.

There is a long way to go. The U.S. two-year contribution for 2016-7 was approximately $1.2 billion of the total $5.5 billion budget. Even if the U.S. was to receive the majority of that reduction, it would still only be a shaving off the U.S. contribution.

This does not include the approximately $5 billion over two years the U.S. contributes to U.N. peacekeeping missions, as well as other agencies. Foreign Policy reports that the U.S. pumps approximately $10 billion a year into the U.N. altogether.

The accompanying Axios graph shows just how much more significant the U.S. contribution is compared to other top nations. 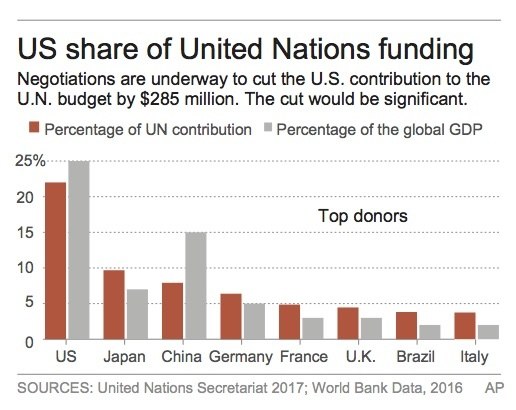 One outlier is China, whose contribution makes up only approximately eight percent of the U.N.’s budget ($393 million), despite its economy making up 15 percent of global GDP. Among Asian nations, China was outspent by Japan — which contributed $481 million to the U.N. budget.