Thousands of anti-Trump protesters filled the National Mall around the Lincoln Memorial and reflecting pond on Saturday, carrying signs that reveal, one year into the Donald Trump presidency, the anger over his victory has not dimmed. 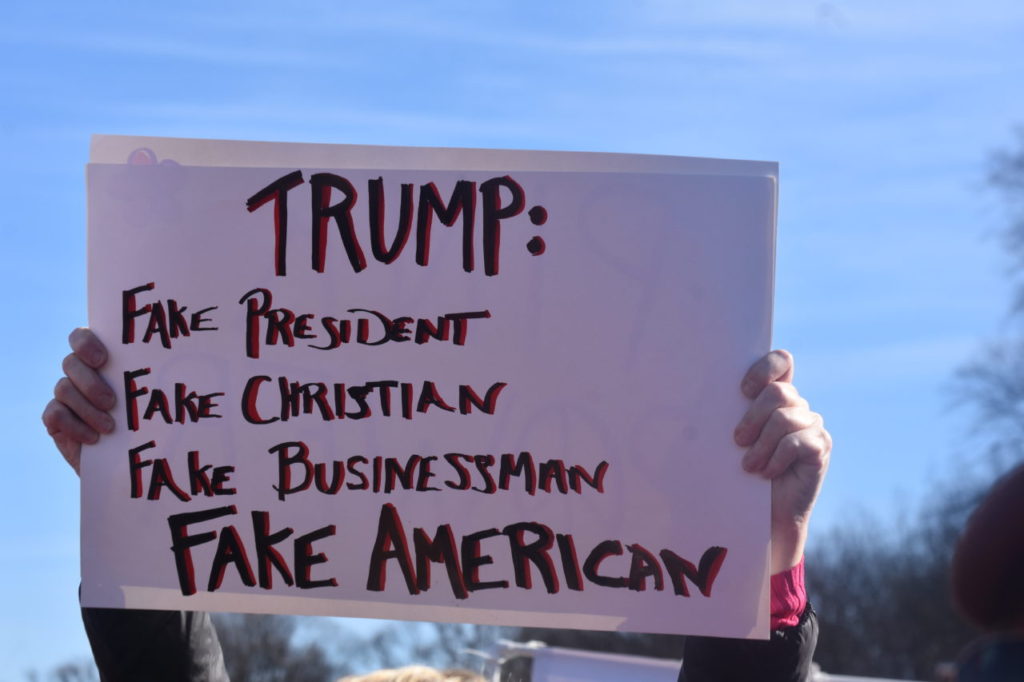 A sea of pink pussy hats contrasted with a bright blue winter sky, but the real color was reflected in the protesters’ placards at the 2018 Women’s march in D.C., dubbed “March to the Polls” to reflect organizers’ efforts to put left-wing candidates — especially female candidates — into elected office. 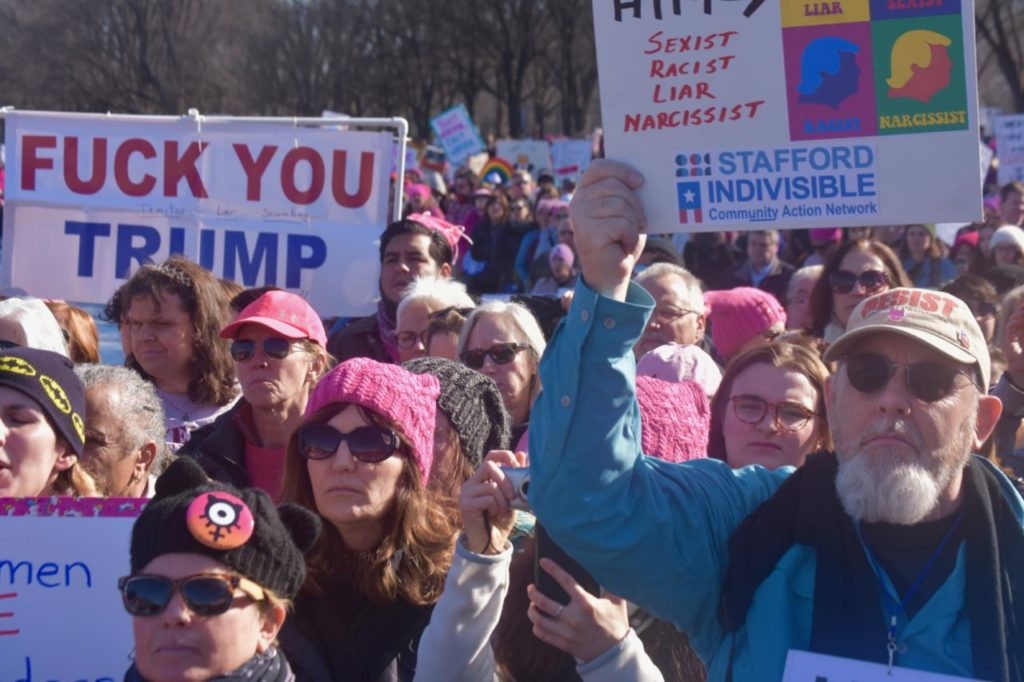 The signs waved at the rally ahead of a march ending at the White House ranged from the F-word aimed at Trump and House Speaker Paul Ryan (R-WI) to those in support of open borders, the LGBT agenda, and the impeachment of the president. 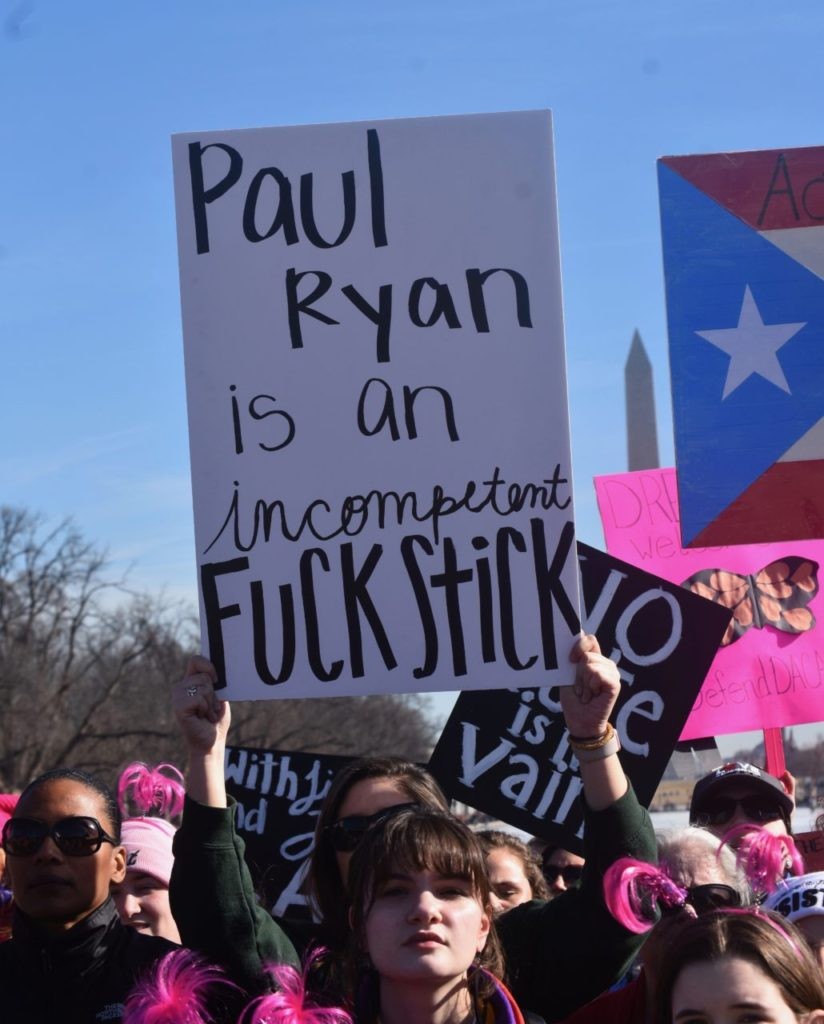 The shithole word was also prevalent at the rally – not in reference to Third World countries, but to the president. 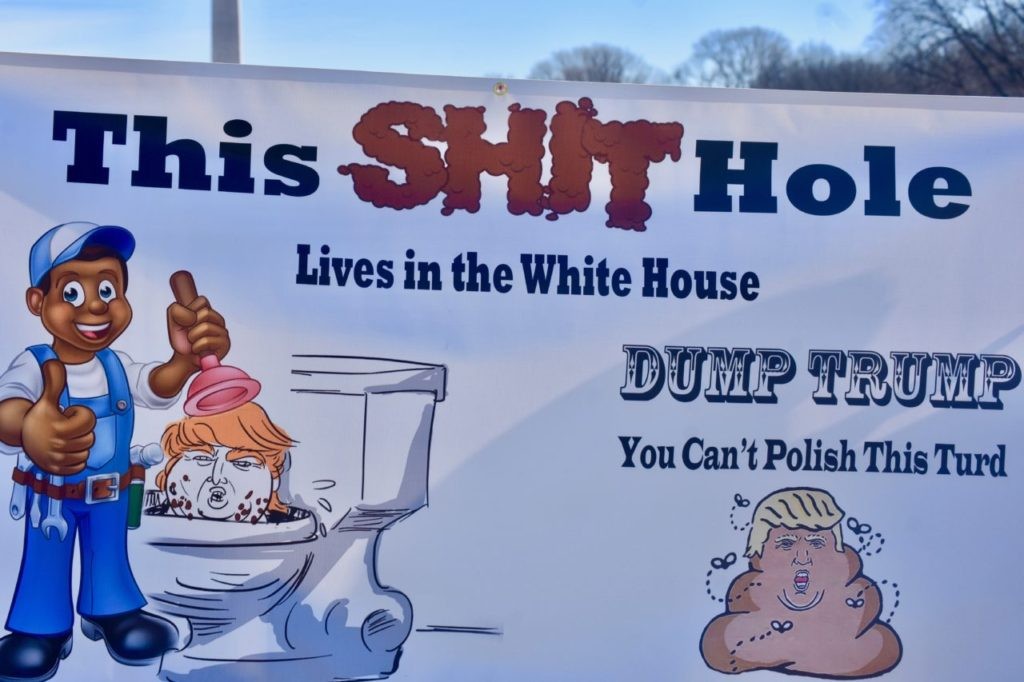 Speakers at the event repeatedly called Trump a racist and the Democrats that showed up to speak, including Sen. Tim Kaine (D-VA) and House Minority Speaker Nancy Pelosi (D-CA), were flanked by a black and white “Resist” banner.

Pelosi urged women to run for office in her remarks. 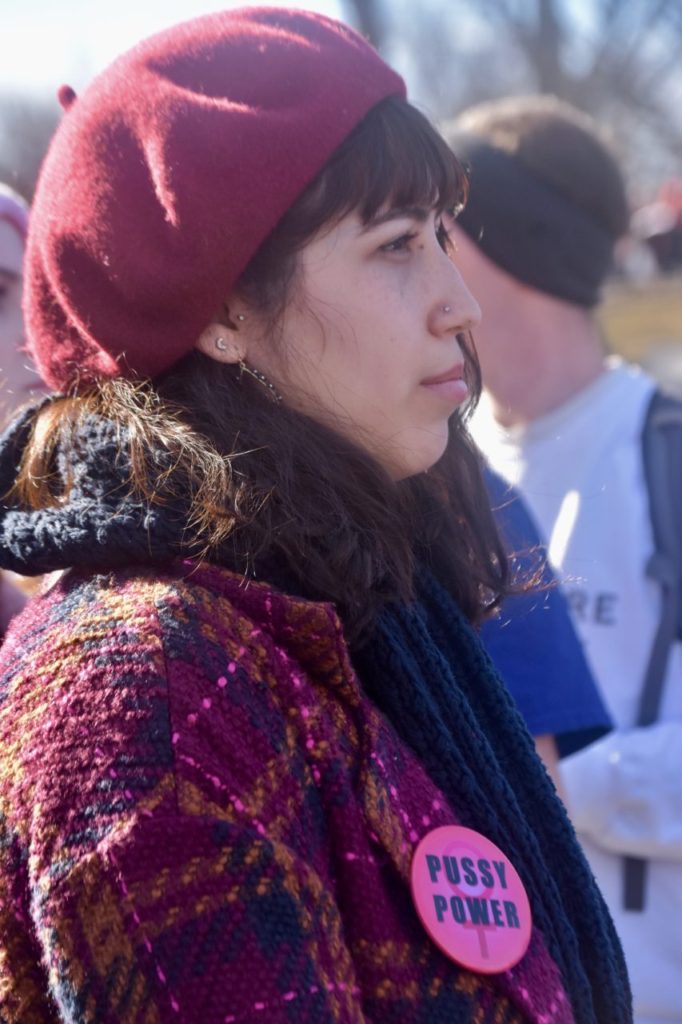 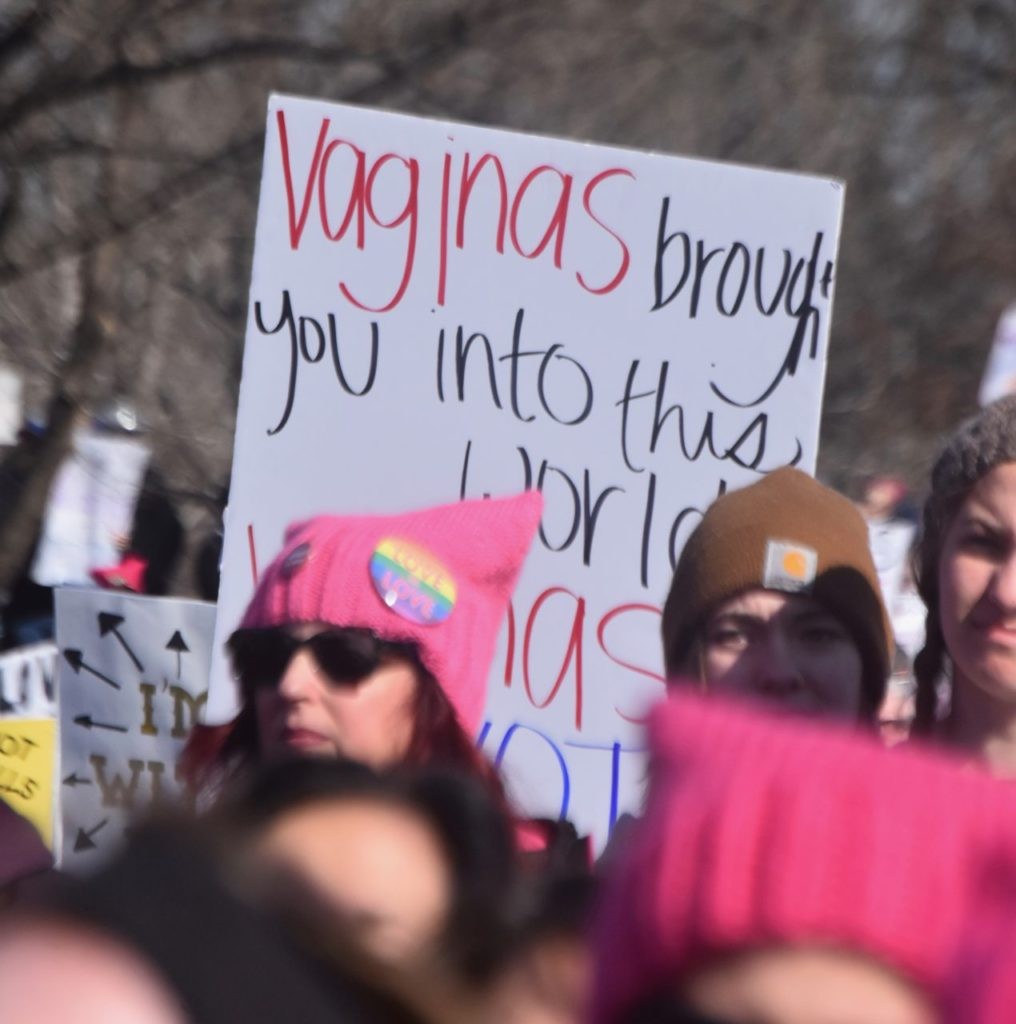 Trump was also blamed for the partial shut down of the federal government after Democrats failed on Friday to vote for a short-term funding Continuing Resolution that did not include amnesty for DACA recipients – the 800,000 or more illegal aliens who were given temporary legal status by President Barack Obama’s 2012 executive order. 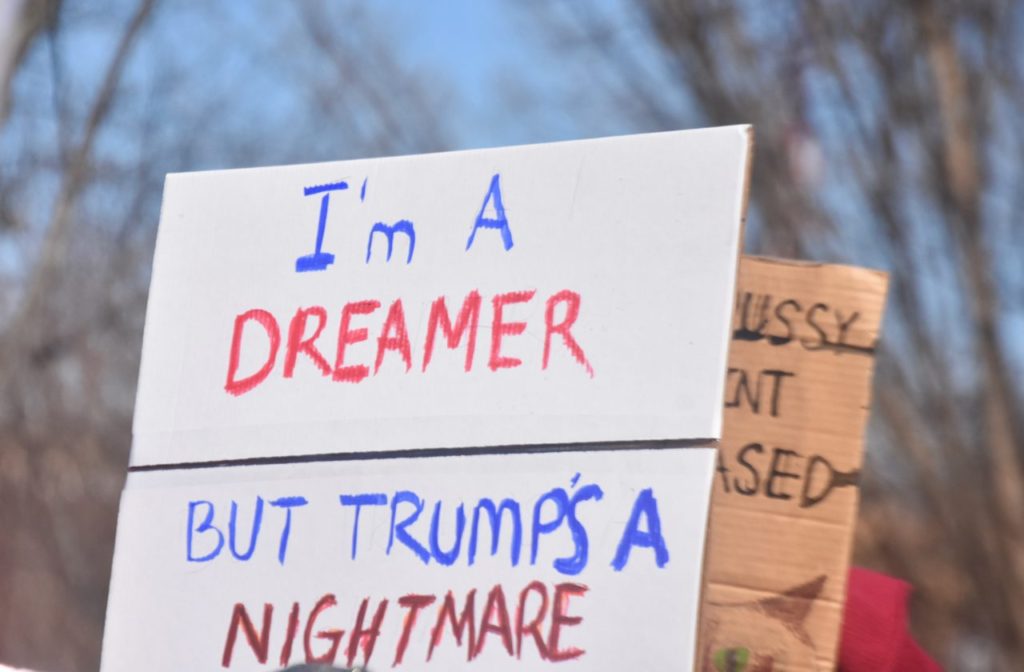 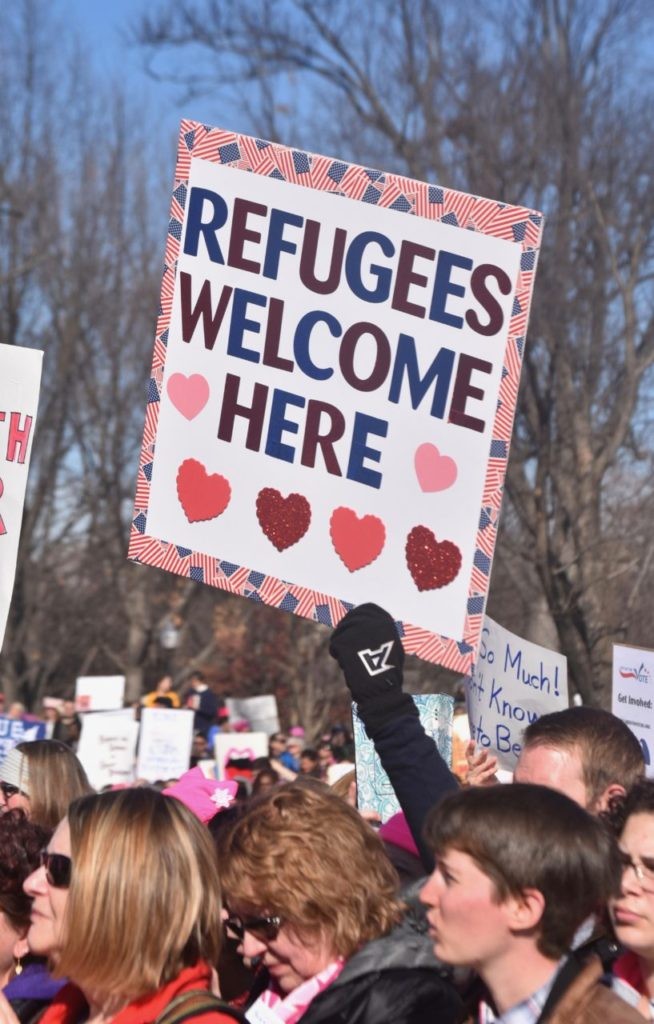 Meanwhile, President Trump tweeted that it was a beautiful day for a protest and noted the progress his administration has made over his first year in office. 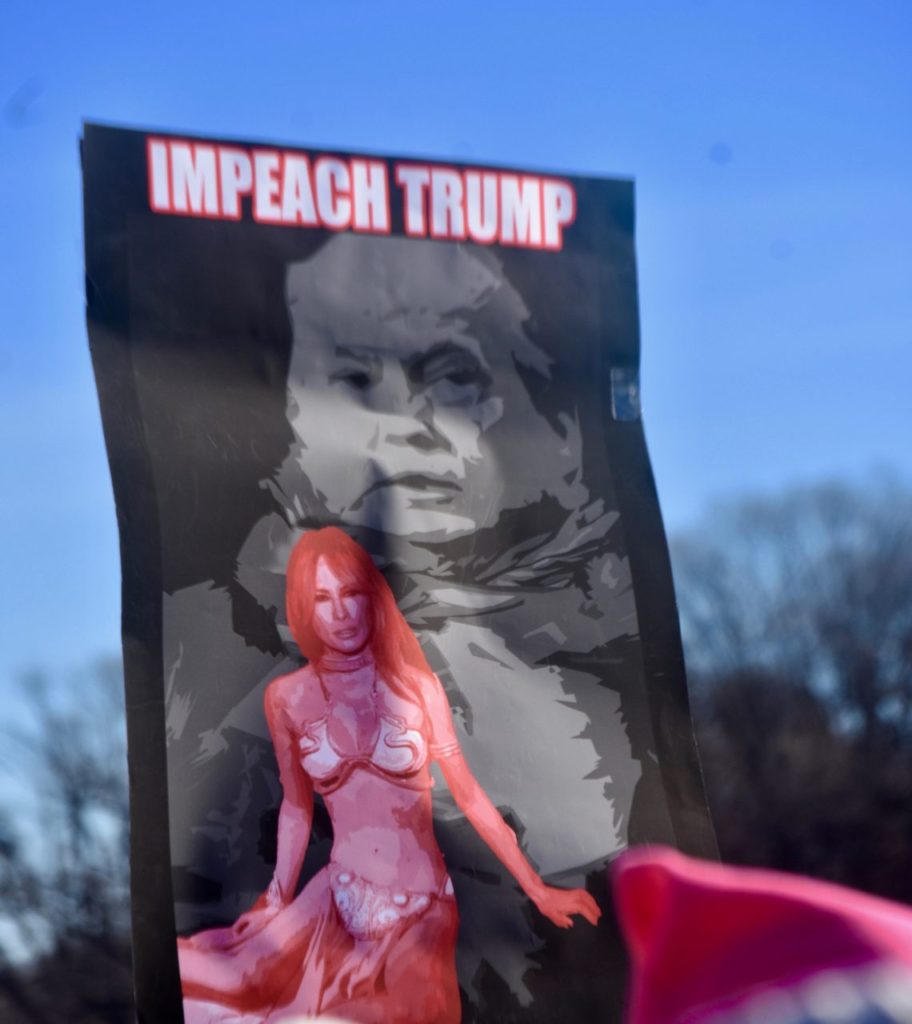 Beautiful weather all over our great country, a perfect day for all Women to March. Get out there now to celebrate the historic milestones and unprecedented economic success and wealth creation that has taken place over the last 12 months. Lowest female unemployment in 18 years! 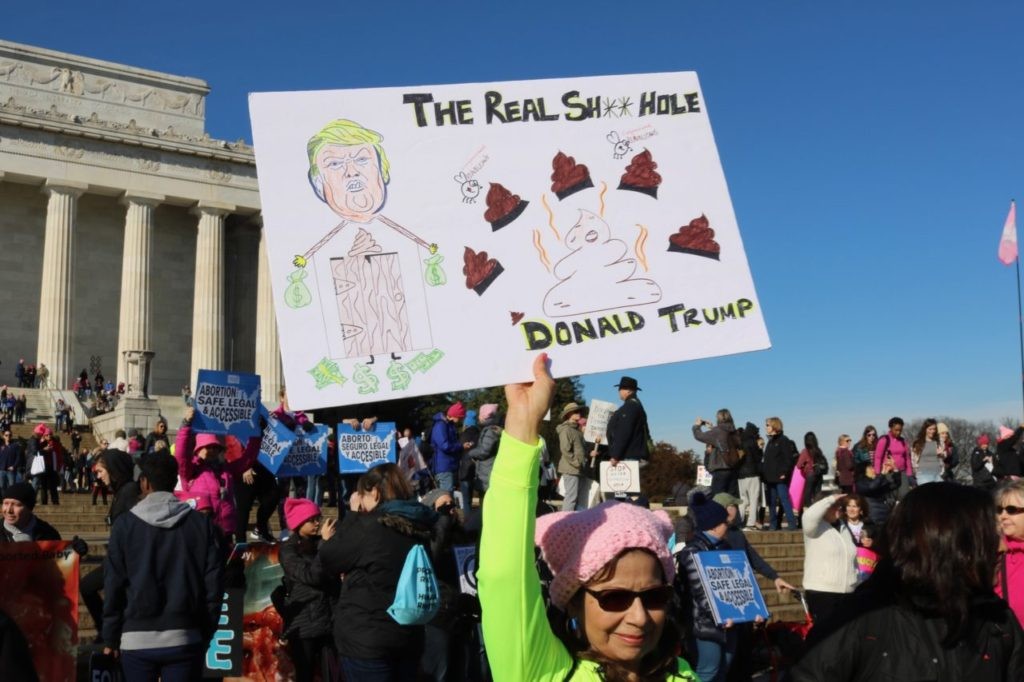 Many of the marchers centered their messages around a “sh*thole” theme. This one displayed the President’s head on what appeared to be an outhouse. 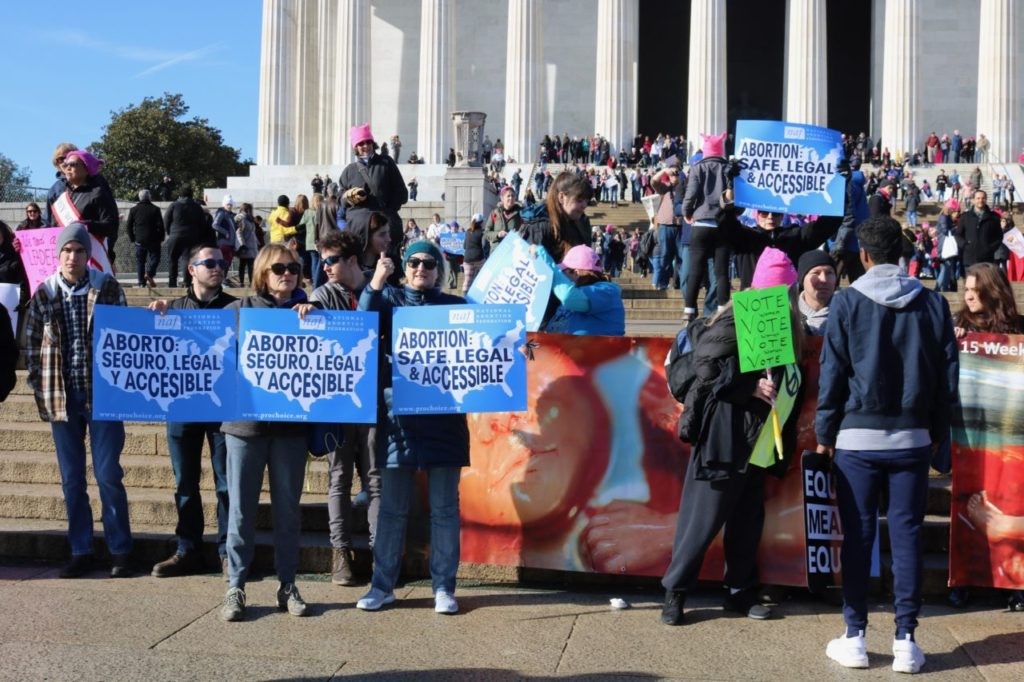 A pro-life group displayed photos of aborted babies. Those involved in holding the signs were involved in a number of different pro-life groups and many were young. The group hoped to push back on pro-abortion messages at the march in a peaceful manner. Several of the pro-abortion advocates at the march grabbed signs promoting abortion and held them in front of the pictures of aborted babies, attempting to shield the dead baby images from view. 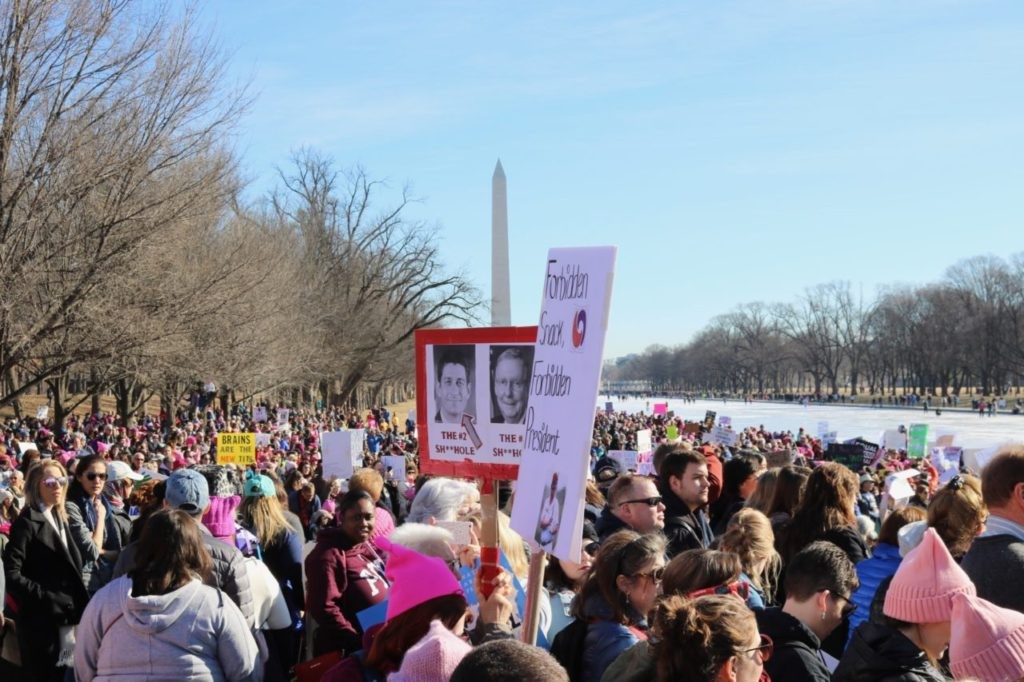 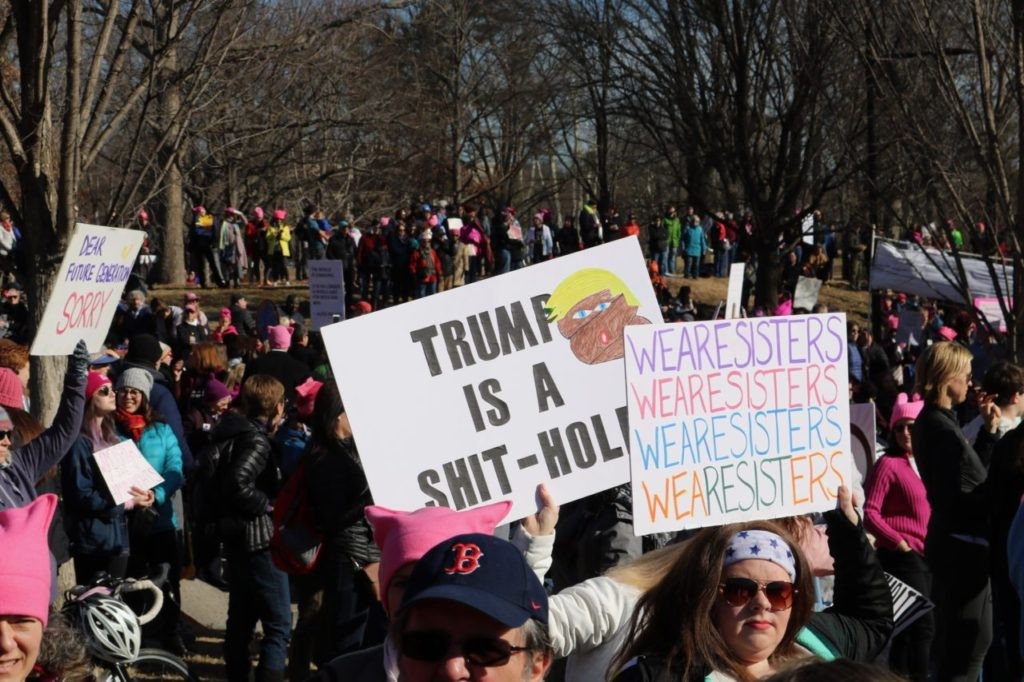 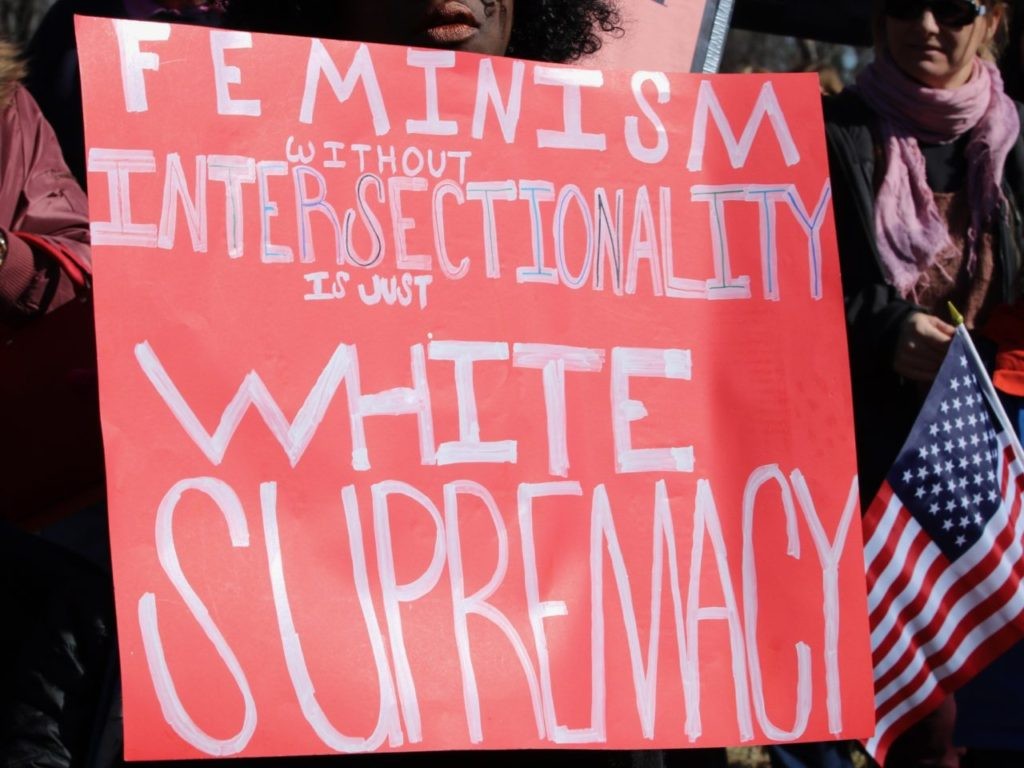 This sign was held high by a group of women who periodically shouted loud enough that it drowned out the words of the speakers for those nearby. 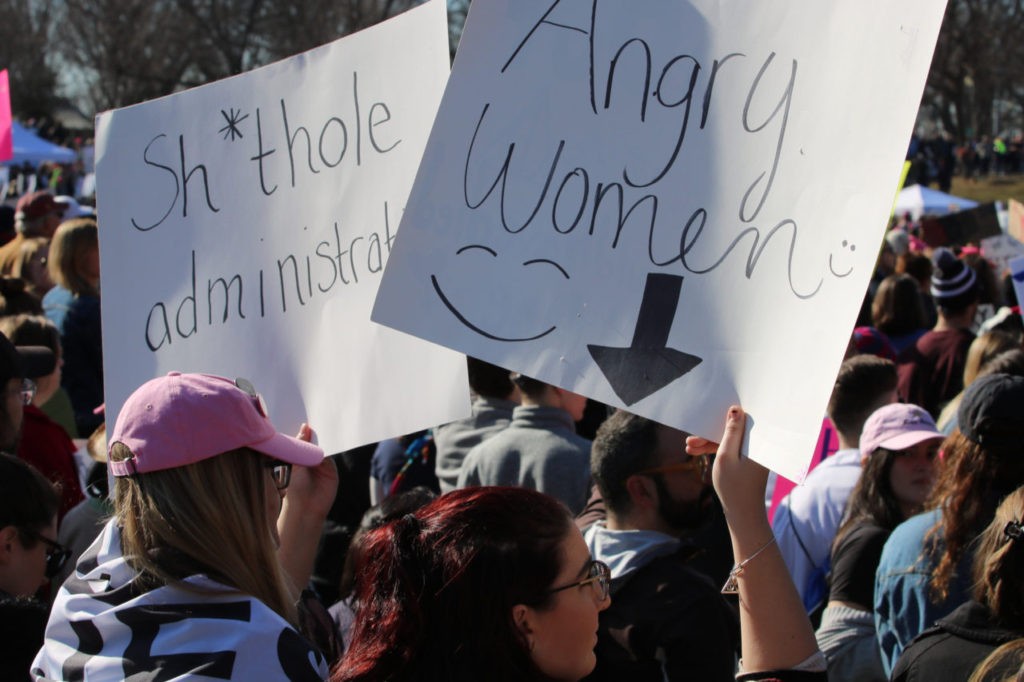 These two proclaimed the entire administration as a “sh*thole” while one also proclaimed “angry women” with an arrow pointed down at herself. 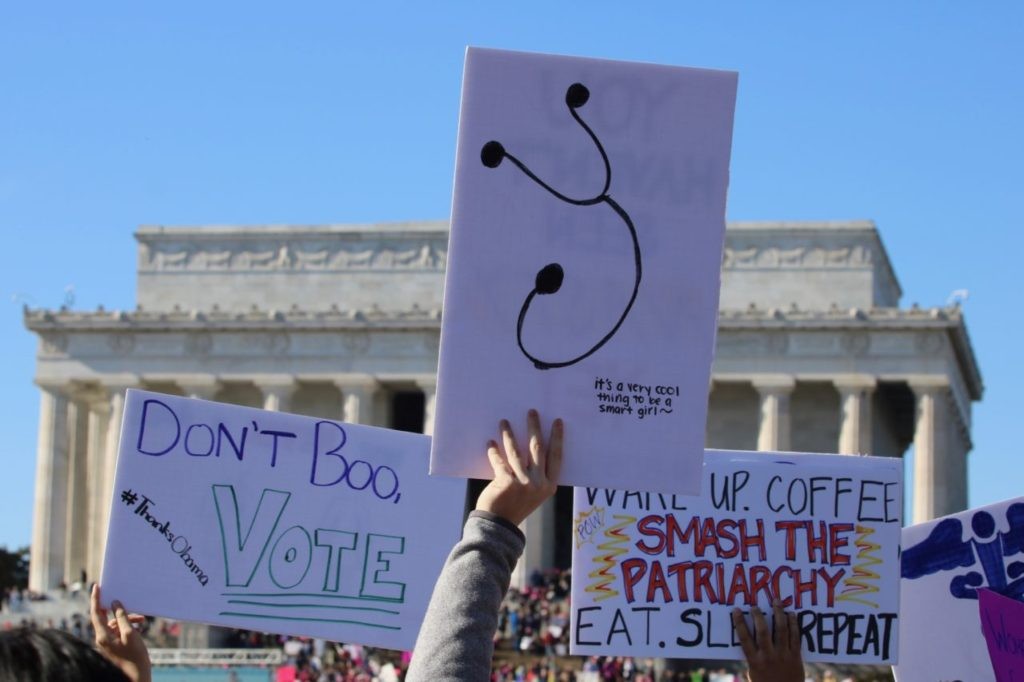 These show some of the variety of signs. One thanked Obama while another declared “POW” and “SMASH THE PATRIARCHY.” 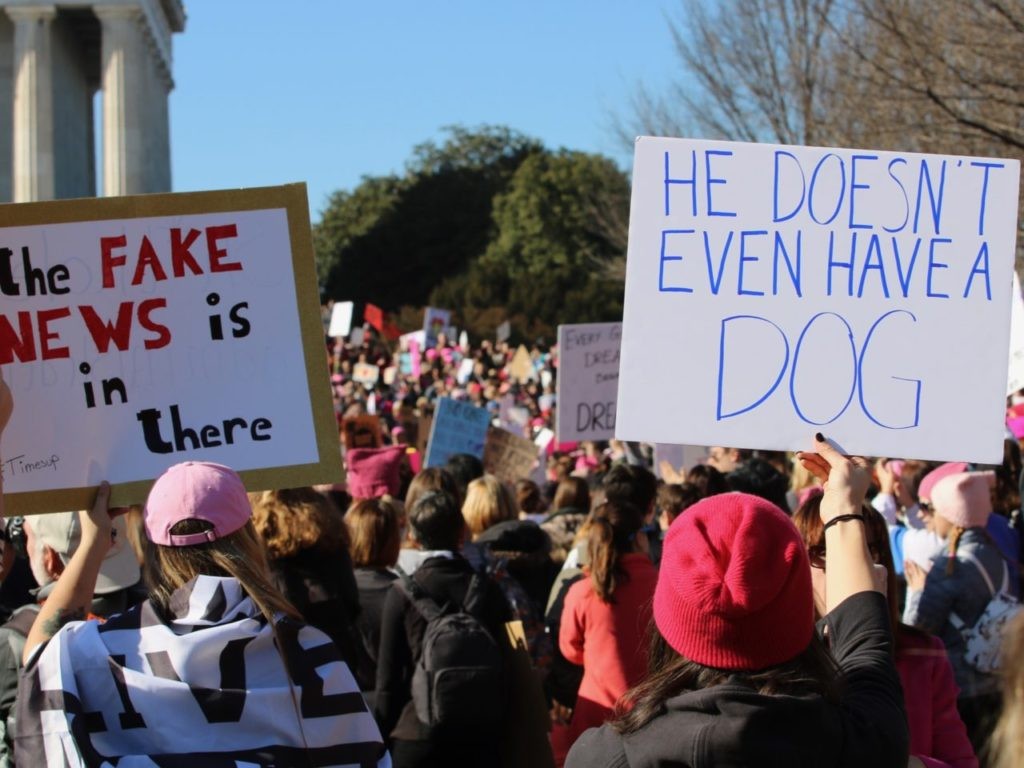 Here, one woman draped in a Black Lives Matter flag held a sign reading, “the FAKE NEWS is in there.” Another slammed the President for not having a dog. 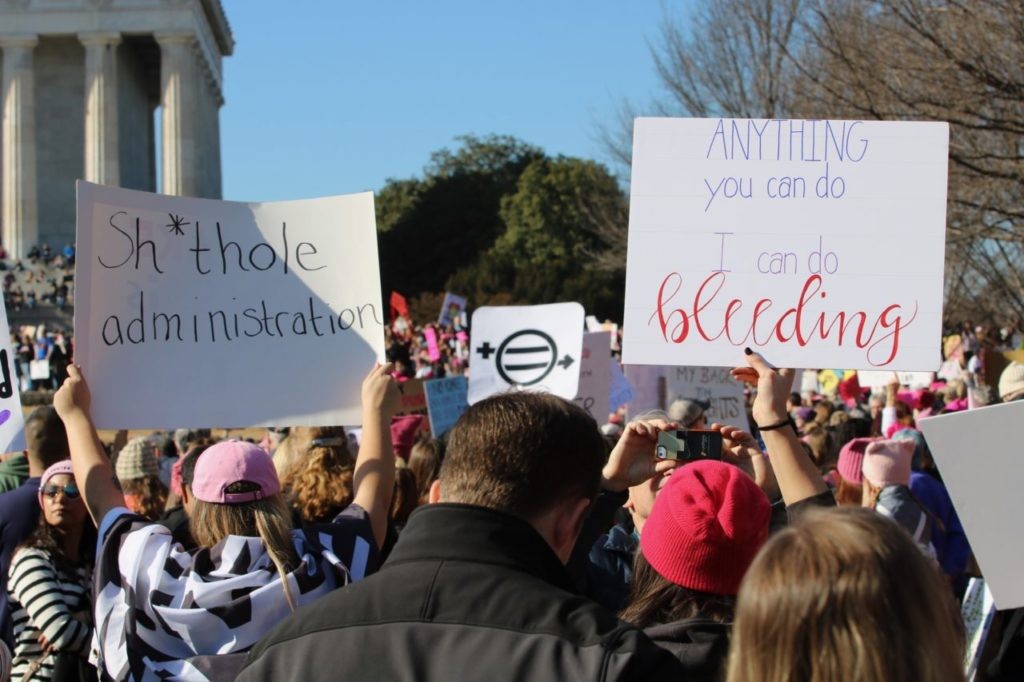 “Anything you can do, I can do bleeding,” read another sign that emblazoned the just the word “bleeding” in red, apparently pointing to her ability to do anything someone else can do, but while also on her menstral cycle. 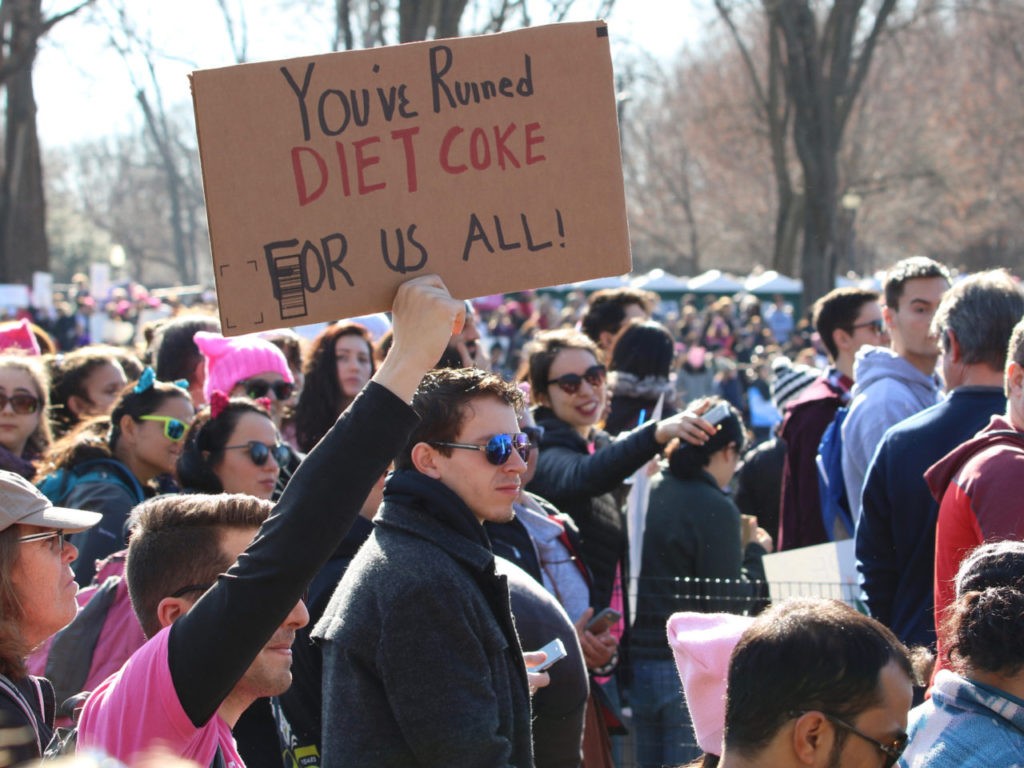 This marcher seemed to take aim at Trump’s beverage habits, “You’ve ruined diet coke for us all.” The other side of his sign, as shown below, read, “I’m not interested in being polite or heterosexual.” 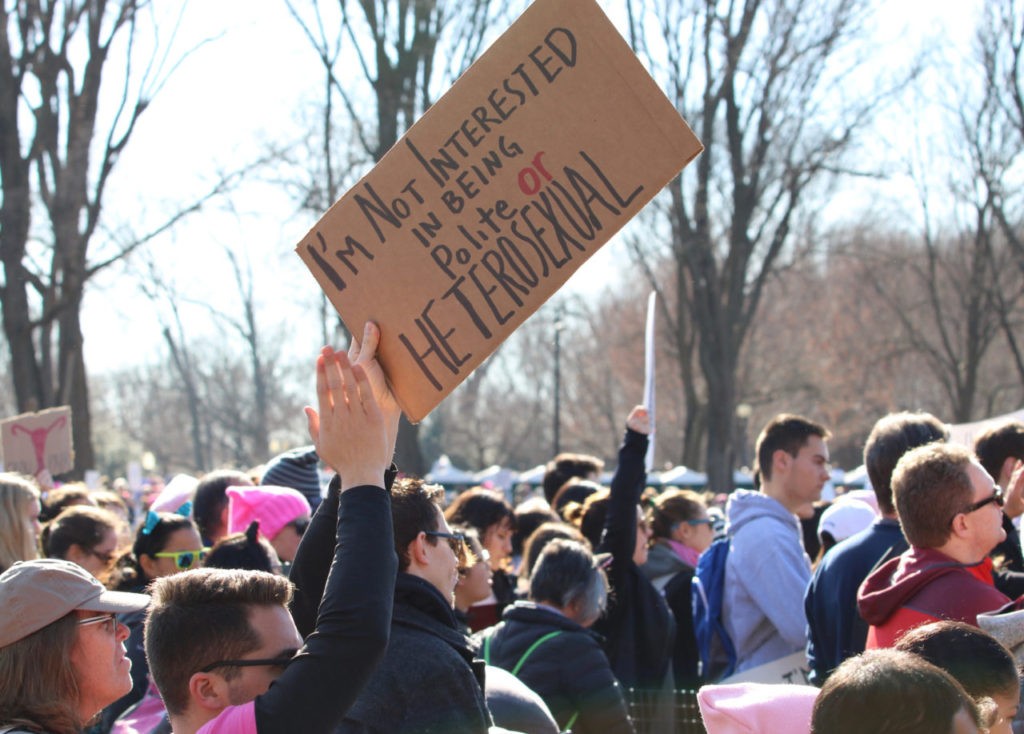 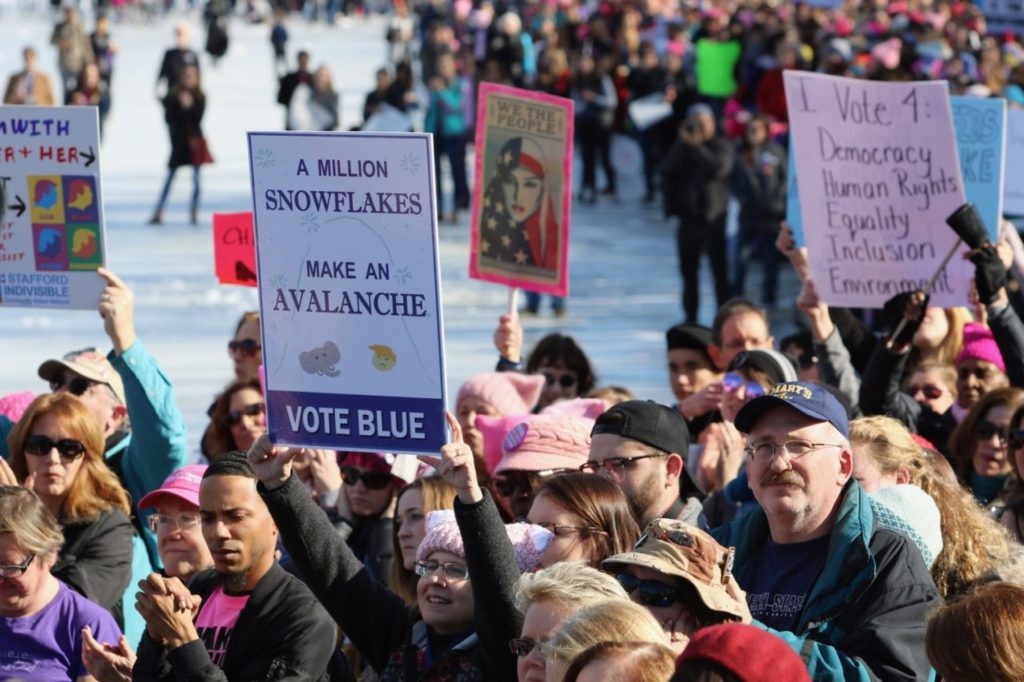 The 21st of the top 21 signs at Saturday’s Washington, DC Women’s March was a call to “A Million Snowflakes” to “Vote Blue.” The words “Make and Avalanche” could be read over a mountain of snow looming over depictions of the head of an elephant, the Republican mascot, and President Trump’s head.