U.S. Education Secretary Betsy DeVos did not challenge the premises of questions thrown at her by CBS’s Lesley Stahl, who highlighted how “hated” DeVos is among Americans.

Sunday night’s installment of 60 Minutes found the struggling education secretary responding to a question by Stahl as to why she has become “the most hated Cabinet secretary,” and agreeing that, yes, “Maybe I should” visit underperforming schools in the United States, after admitting she has not.

On the issue of arming qualified teachers who want such a duty as a means of keeping schools safer, DeVos responded such an option should be available, but then volunteered, “I hesitate to think of, like, my first-grade teacher, Mrs. Zorhoff, I couldn’t ever imagine her having a gun and being trained in that way.”

“The problem with the interview was that Secretary DeVos accepted the slanted premises of every question and simply tried to apologize or answer within them,” Manhattan Institute senior fellow Max Eden tells Breitbart News.

During one portion of the interview, Stahl questions DeVos about the state of schools in her home state of Michigan, where DeVos was actively involved in promoting school choice and charter schools:

Lesley Stahl: Now, has that happened in Michigan? We’re in Michigan. This is your home state.

Lesley Stahl: Have the public schools in Michigan gotten better?

Betsy DeVos: I don’t know. Overall, I– I can’t say overall that they have all gotten better.

Lesley Stahl: The whole state is not doing well.

Betsy DeVos: Well, there are certainly lots of pockets where this– the students are doing well and—

Lesley Stahl: No, but your argument that if you take funds away that the schools will get better, is not working in Michigan where you had a huge impact and influence over the direction of the school system here.

Betsy DeVos: I hesitate to talk about all schools in general because schools are made up of individual students attending them.

Lesley Stahl: The public schools here are doing worse than they did.

Betsy DeVos: Michigan schools need to do better. There is no doubt about it.

Lesley Stahl: Have you seen the really bad schools? Maybe try to figure out what they’re doing?

Lesley Stahl: Maybe you should.

Betsy DeVos: Maybe I should. Yes.

Eden explains to Breitbart News how DeVos should have responded to these questions.

“When Lesley Stahl says, ‘What about your awful record in Michigan with school choice?’ the answer should be, ‘Actually, Michigan charters performed substantially better than traditional public schools there,’” he says. “’And we’ve seen great successes there. And there are obviously problems in Detroit – huge problems in Detroit – but the charter schools are doing so much better than the pubic schools there, and I don’t think it’s fair to blame the problems we see in public schools on these other schools that are doing better.’” 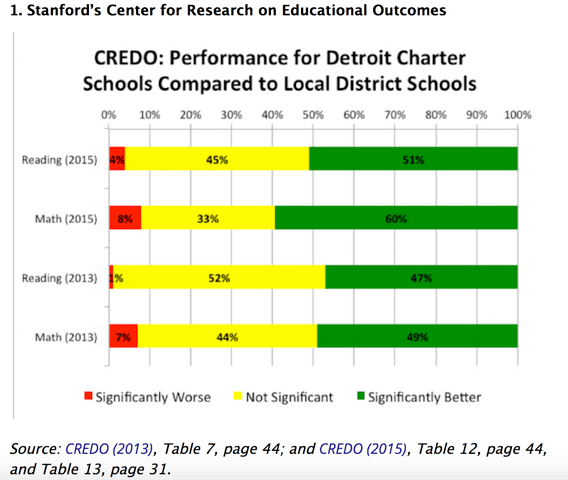 Eden and the Cato Institute’s Jason Bedrick wrote at EducationNext in January 2017 about the data from Stanford University’s Center for Research on Education Outcomes (CREDO), which shows that Michigan’s charter schools performed better than public schools. CREDO states:

These findings position Michigan among the highest performing charter school states CREDO has studied to date.

On the issue of the Obama-era school discipline policy of incentivizing school districts to reduce suspensions, expulsions, and arrests for minority students based on the premise that teachers engage in “institutional racism,” Stahl asked DeVos, “Do you see this disproportion in discipline for the same infraction as institutional racism?”

“We’re studying it carefully,” responded DeVos. “And are committed to making sure students have opportunity to learn in safe and nurturing environments.”

“So Stahl said to DeVos,” explains Eden, “’Don’t you think that when white and black students do the same thing, and black students are punished more severely, that that’s institutional racism?’ On the one hand, obviously, even when that happens, that’s racist, and that was illegal before the Obama-era ‘guidance.’ But, the guidance is not about disparate treatment. It’s about disparate impact. The guidance is not about providing supports. It’s about forcing school districts to adopt loose discipline policies. But, DeVos simply accepted the false premise of the question, and then you can’t provide a good response.”

Erin Tuttle, a parent activist from Indiana and a co-author of the book Deconstructing the Administrative State: The Fight for Liberty, notes to Breitbart News, “As Secretary of Education, it’s DeVos’s job to make the case to the American people on the need to reverse the Obama-era guidance on school discipline policies referenced by Stahl.”

“Despite the numerous legal and practical arguments for reversing such guidance, which, according to Sen. Marco Rubio allowed the Florida shooter to go undetected by law enforcement, DeVos offered none,” she adds. “Her lack of answers isn’t doing this Administration any favors.”

Eden observes the Trump presidency and his administration have had a major theme of not accepting premises set by the media.

“To not just answer the question as asked, but try to tell the public what you think is true, what you believe, and how you believe it,” he adds. “Secretary DeVos has not been able to draw the connection between her beliefs in choice and deregulation. She believes in choice, not because it’s a market thing, but because teachers should have freedom. And that’s what deregulation is, too. It’s about that the best way to go is to give teachers the freedom to do what they think is right. And that’s the missing link in her philosophy in which she believes, but has not articulated forcefully enough.”

“She needs to deny the premise,” Eden asserts, stating the media at this point is very hostile toward her. “They want to paint her into a corner and she is insisting on coloring within the lines.”

The left-wing media has largely ignored conservatives’ issues with DeVos from the announcement of her nomination to her post, including her avid support for organizations that have promoted the Common Core standards, her insistence that the massive federal Every Student Succeeds Act has ended Common Core – when most states are still using the standards even if under a different name, and her decision to surround herself with advisors who have also worked for her close friend, former Florida Gov. Jeb Bush.