The United States population is set to surpass 400 million by the year 2060 – mostly because of immigration, the U.S. Census Bureau estimates. 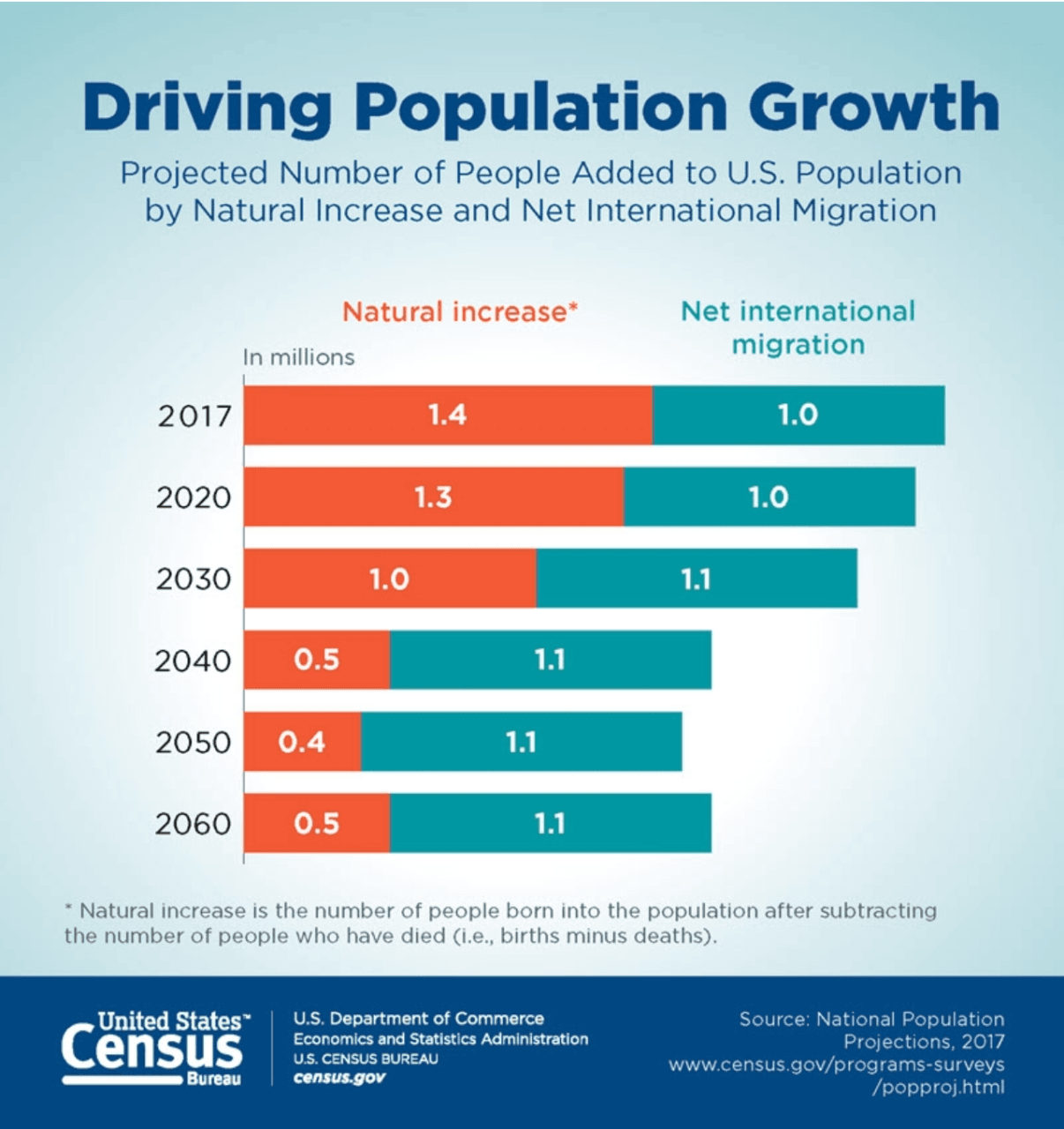 NumbersUSA President Roy Beck says the projected massive increase to the U.S. population in the next 40 years will bring about an era in which Americans see their quality of life deteriorate.

“Population increases are not natural,” Beck told Breitbart News. “It’s driven by immigration and their descendants. Unlike a country like Australia, we don’t have a debate about that. We don’t have that debate.”

“We ought to have that debate: Should Congress drive us to 400 million people?” Beck asked.

Beck noted to Breitbart News that the projected increase putting the U.S. population over 400 million by 2060 means the regions of the country where there are already large populations will become even denser, creating infrastructure, environmental, and quality of life issues for millions of Americans.

There’s very little that you could say that changes the lives of Americans more than population growth.

You add 75M people and what we know, you need another housing unit for every 2.2 people. The average housing unit has about 2.2 people in. You will need 35 million new housing units. [Emphasis added]

You can go up, you can become denser. You cannot add 75M new people without expanding suburbs. In previous decades, areas of farmland the size of Maryland were destroyed to handle population growth. They not only need places to live, but it takes a lot of land for every person. [Emphasis added]

Beck says the number of cars on the road, along with the infrastructure to handle the population increases to the U.S., will transform many suburbs along the East Coast, West Coast, in Texas, and in the Southeast region into a megalopolis.

“That area is on its way to becoming jammed,” Beck said of the Dallas-Houston-San Antonio region.

Members of Congress have spoken very little about the impact of such large population growth on Americans, with only a few ever touching on the subject.

Rep. Mo Brooks (R-AL) spoke about the issue last year, telling the Montgomery Advertiser that massive population increases largely due to immigration put the U.S. at risk of becoming “crammed.”

“Do we want to be another India where we’re all crammed on top of each other in apartments in high-density population areas with the risk of us outstripping natural resources, or lowering the standard of living here?” Brooks said at the time. “Is that the country we want to be 100 or 200 years from now?” [Emphasis added]

Center for Immigration Studies Director of Research Steven Camarotta has previously told Breitbart News that in the next 50 years alone, mass immigration is set to add 100 million foreign-born people to the U.S.

So as terms as its impact on American life, that’s probably the first thing, the country becomes much more densely settled, much more populated, and remember, only about 60 counties in the United States, two-thirds, three-fourths of all the people end up in just those 60 counties or so. So… that’s an enormous impact on the quality of life in an area like Washington, D.C., you know it might add half a million people to the U.S. population or the county of the D.C. metro area even over the next 30 or 40 years. That certainly does mean a lot more congestion and traffic and so forth. [Emphasis added]

President Trump has repeatedly asked the Republican-controlled Congress to reduce legal immigration levels, though such a plan has yet to be acted upon by GOP House and Senate leaders.