CNN White House reporter Kaitlan Collins and President Trump went back and forth over funding for the border wall during a press conference in the Rose Garden Friday, with Collins continuing to question Trump after an aide retrieved the microphone from her.

“You ran your campaign promising supporters that Mexico is going to pay for the wall, and that the wall was going to be made of concrete,” Kaitlan Collins said.

“You just said earlier that the wall could be made of steel and right now our government is shut down over a demand from your administration that the American taxpayer pay for the wall. So how can you say you’re not failing on that promise to your supporters?”

“Very nice question, so beautifully asked, even though I just answered it,” Trump responded.

“You didn’t answer it! The USMCA has not even passed Congress yet, sir,” the CNN reporter replied.

Trump continued, “Excuse me, are you ready? I just told you that we just made a trade deal, and we will take in billions and billions of dollars, far more than the cost of the wall, the wall is peanuts compared to what the value of this trade deal is to the United States. As far as concrete, I said I was going to build a wall. I never said I’m going to build a concrete…”

“Just so you don’t–because I know you’re not into the construction business, you don’t understand something. We now have a great steel business that’s rebuilt in the United States. Steel is stronger than concrete,” Trump said.

The president then continued to explain his vision for the future border wall. Collins eventually shouted another question.

At that point, a White House aide retrieved the microphone from Collins while she continued to shout. 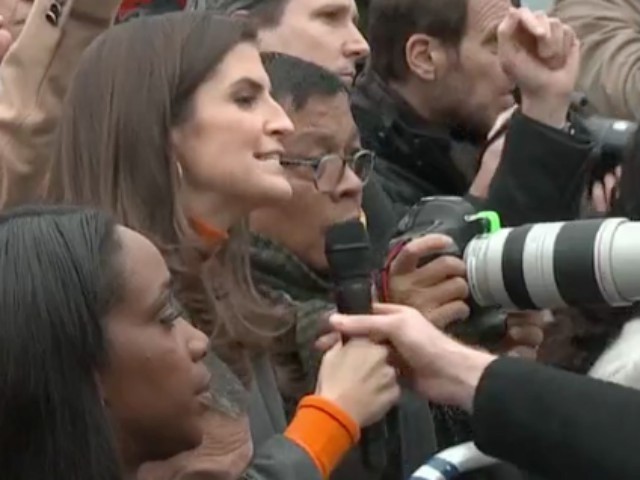 President Trump also made news Friday, when during the press conference he signaled a willingness to call a state of emergency over border wall funding.

“We can call a national emergency,” he said.