American Veterans who risked their lives in the Afghanistan and Iraq wars are increasingly opposing foreign interventionism that continues to dominate the Washington, DC, political establishment.

Likewise, nearly 60 percent of Veterans and all American adults say the Afghanistan War was not worth the fight. Less than 40 percent say the U.S. invasion of Afghanistan was worth fighting. 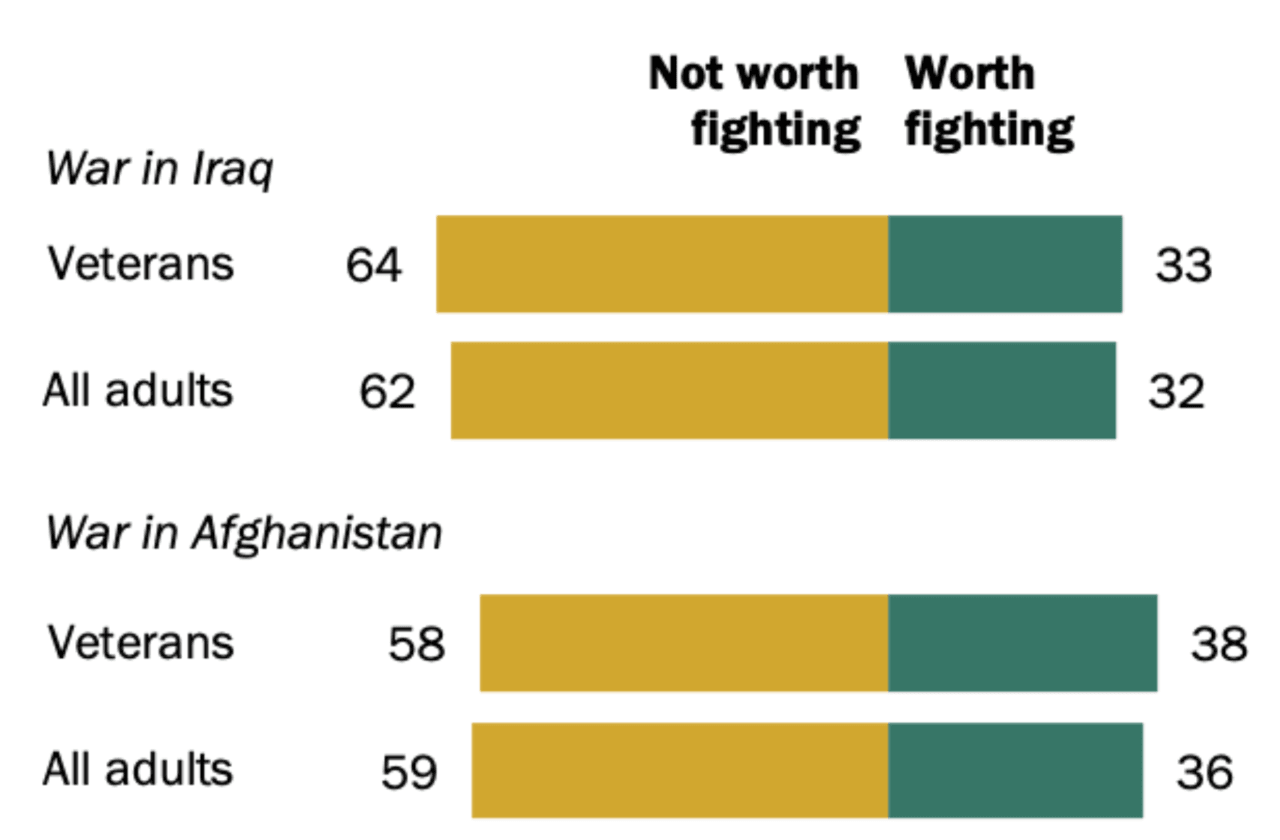 In interviews with the New York Times, Veterans explained their support for President Trump’s effort to end what he has dubbed the “endless wars” across the Middle East which has cost hundreds of thousands of lives.

“All in all, it is a lot of wasted lives and money and time and effort spent to accomplish a goal we never accomplished,” said 31-year-old Tyler Wade, who received a Purple Heart for his service in Afghanistan, told the Times.

Veteran Dan Caldwell said American men and women signed up to defend their homeland against terrorists, not to nation-build whole countries and remain until stability in the region is regained.

“For conservative-leaning veterans, we signed up to defend our country,” Caldwell said. “We didn’t sign up to build girls schools in the Al Anbar Province. We had friends killed or wounded in action; it wasn’t clear for what.”

Veteran Amber Smith, 37-years-old — who served in Afghanistan and Iraq between 2005 and 2008 — said the minority of Veterans in Congress who continue to support U.S. military intervention in foreign countries do so at the expense of their brothers and sisters in the uniform.

“We gave it nearly two decades, thousands of U.S. lives and hundreds of billions of dollars, and we have learned at this point there is no military solution to the conflict in Afghanistan,” Smith told the Times. “There are a few veterans in Congress who are very pro-military-involvement in the Middle East. Well, they already fought that fight. They are not going back. As we have seen, when Trump talks about reducing troops, everyone in D.C. becomes unhinged. Unfortunately, the U.S. service members pay the consequences for that.”

Even when it comes to the U.S. intervention in Syria, Veterans by a majority oppose the effort. The Pew Research Center survey found that 55 percent of Veterans said U.S. involvement in Syria is “not worth it” while almost 60 percent of American adults agreed.

Former President George W. Bush led the U.S. into war in Afghanistan and Iraq with more than 4,500 Americans dying in Iraq — including more than 3,500 killed in combat — and up to 205,000 Iraqi citizens dying in the war since March 2003.

In total, Bush’s post-9/11 wars in Iraq, Afghanistan, and intervention in Pakistan have resulted in the deaths of between 480,000 and 507,000 people — including nearly 7,000 American soldiers who had deployed to the regions.