In contrast to today’s safe spaces and triggered behavior, sixty-nine years ago a forgotten generation from a forgotten war pushed the limits of human endurance–demonstrating American resilience and true grit.

This company of Marines braved 30-degree-below temperatures, withstood Chinese human-wave attacks, and survived on snow and Tootsie Rolls to hold a crucial hill. Their efforts changed the course of a battle–and maybe even a war. 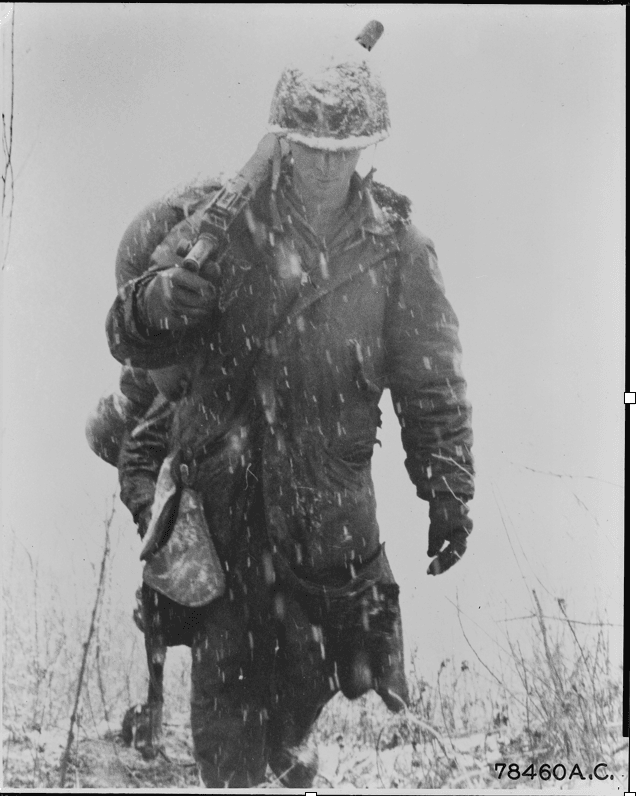 During the winter of 1950, a Chinese army over 120,000-strong surrounded the 1st Marine Division in the mountainous region of North Korea known as the Chosin Reservoir. The Chinese hoped to annihilate the Marine Division and elements of U.S. Army units that made up X Corps, now immortalized as “The Frozen Chosen.” To the west, the Chinese had delivered a crushing defeat to the U.S. Eighth Army. The Korean War seemed all but over.

Within the Marine Division the Marines of 3/1’s George Company story closely resembles the classic tale of the epic stand of 300 Spartans who held off the Persians at Thermopylae. This tiny company of less than 200 men faced Chinese troops outnumbering them in some cases over 20-to-1 on a crucial mount known as East Hill. If the hill fell, it would imperil the survival of the entire 1st Marine Division.

The flash of a green Chinese flare dimly illuminated the entire contour of the hill. George Company Marine Fred Hems and his foxhole buddy Tom Powers looked out and saw “the hill literally moving.” Like “an army of ants, thousands of them descending upon us,” recalled Hems. Suddenly, the piercing sound of enemy bugles and whistles shattered the quiet of the night.

The Chinese attacked in regimental strength: 2,000 to 3,000 men. Bathed in the eerie light of the flare, Chinese officers screamed at the men, urging them on: Shā! Shā! Shā! [Kill!]

“Holy sh*t! They are all over the place!” screamed Hems.

Now the sh*t really hit the fan, thought Powers. “In my dreams, I’ve been fighting on that hill for over 60 years. And in my dreams, the Chinese always appear outlined in an eerie green tint.” After more than ten minutes of constant fire, Powers looked down at Hems’s machine gun. It “glowed like a neon light” from thousands of rounds that passed through its barrel.

Power and Hems’s machine gun combined with a nearby tank helped trap hundreds of Chinese in a deadly crossfire in the small depression between two ridges on East Hill. The Division’s various regiments had been spread out over dozens of miles of treacherous mountainous terrain and were fighting their way south to reunite at a small North Korean hamlet called Hagaru-Ri where they would have to battle their way out of the Chosin Reservoir. Strategic East Hill overlooked Hagaru-Ri. If the Chinese could seize East Hill, their artillery could rain down on the crucial American outpost. Over a hundred thousand Chinese soldiers surrounded the 1st Marine Division and elements of various U.S. Army units that made up X Corps and hoped to annihilate it. The Marines had different plans–much of those plans hung on the shoulders of grunts like Powers and Hems.

George Company’s story is told in the best-selling book, Give Me Tomorrow: The Korean War’s Greatest Untold Story—The Epic Stand of the Marines of George Company.

The snow on East Hill turned “crimson” as the bodies stacked up in front of George Company, but waves of Chinese soldiers kept coming.

“I survived five campaigns in the Korean War, and I had never been more scared, because there was nothing I could do,” he recalled. Angrily, Harbula shucked his helmet and frantically pulled back on the bolt. He did everything he could think of to get the machine gun to fire, including kicking it. It was too late.

“Pull back!” yelled an officer.

“They were all over us,” recalled Harbula. “I smashed one of them in the face with my helmet, and then I fired my .45. When you hit them with the .45, they stop, period.”

Harbula scrambled down the hill, getting off a few rounds from his .45 before stumbling and falling into a crater created by an artillery shell. He landed on flesh and bone. He quickly counted four American bodies lying in the hole. They’re all dead, he thought.

Another flare illuminated the sky, and Harbula began to climb out of the foxhole. A sputtering voice said, “Bob, don’t leave me.” Harbula turned around and realized that fellow machine gunner Richard Haller, shot in both legs, was still alive. He yelled to Haller, “We’re getting out of here.”

Harbula lifted Haller up and half-carried him down the side of East Hill, struggling to get him to the safety of the aid station.

During the melee, Bruce Farr, an ammo carrier for First Platoon’s machine gun section, recalled, “I know three men that predicted their own death within three hours.” Like countless men throughout the history of battle, their ill-omened premonitions were almost always fatefully realized. As they worked their way up the slope, Farr remembered fellow ammo carrier Ed Green ominously saying, “I won’t live to see the top of the hill.” Farr responded, in a reassuring voice, “We are all afraid. If we don’t get back to the top with this ammo, none of us will be alive come daylight.” Green would never see the top the hill. The next morning, corpsmen reported that Green had gone into shock from a compound bone fracture and literally froze to death on East Hill.

Another George Company Marine remembered firing his weapon into the mass of the oncoming Chinese, killing scores of them: “They were all over the place. They were everywhere. They got close, very close. Then they were up on top of us. I don’t understand to this day. Several Chinese were actually so close, they ran right by us, looked at me, and didn’t shoot. It’s a mystery to me, but I guess God did not want me to die that night.” For days, George Company held the hill. With food in short supply, the men survived on Tootsie Rolls and snow.

After five days, George Company moved out. Frostbitten, sick, and tired, the men passed by East Hill. Over 1,000 Chinese bodies littered the rocky jagged slopes, most of them the result of the Marines’ incredible stand. Private First Class and later Lieutenant General Steve Olmstead recalled, “As I looked up at the hill, I remembered the five-day struggle to hold it. That made one hell of an impact on me. It has been with me for 60 years.”

Remarkably, George Company had held the hill, though many of the Marines were replacements. The leadership and fortitude of the unit’s NCOs and officers proved pivotal as they kept the men fighting against overwhelming odds. “To this day, I don’t know how we did it. So many of the guys hardly even knew each other or even went to boot camp,” remembered Harbula. Having never went through formal boot camp, many of the men learned to fire their weapons from George Company’s battle-hardened WWII NCOs as the unit sailed over from Camp Pendleton to Korea.

After their epic stand, they, along with the rest of the division, had to fight their way out of the reservoir and make their way to the waiting ships in the port of Hungnam on the Sea of Japan. On the long mountainous winding road to freedom, a figure snapping pictures startled the long haggard line of Marines. In unison, First and Second Platoons barked, “Don’t take our pictures! Don’t take our pictures!”

Powers and Hems’s Third Platoon, not so camera shy, said, “Take ours!”

The figure, David Douglas Duncan, was a Marine officer in WWII and was among the most influential photographers of the twentieth century. Renowned for his dramatic combat photos, Duncan captured an iconic shot of machine gunners Tom Powers and Fred Hems. The photographer later approached a haggard George Company Marine near him: a “quiet Marine who never said anything, but did his duty.”

“What would you want if you could have any wish?” Duncan asked.

The Marine “continued to stand motionless, with empty eyes. Then his lips began to open . . . [and] his eyes went up into the graying sky.

Patrick K. O’Donnell is a bestselling, critically acclaimed military historian and an expert on elite units. He is the author of 12 books including Give Me Tomorrow: The Korean War’s Greatest Untold Story—The Epic Stand of the Marines of George Company, The Unknowns: The Untold Story of American’s Unknown Soldier and WWI’s Most Decorated Heroes Who Brought Him Home, and Washington’s Immortals. O’Donnell served as a combat historian in a Marine rifle platoon during the Battle of Fallujah and speaks often on espionage, special operations, and counterinsurgency. He has provided historical consulting for DreamWorks’ award-winning miniseries Band of Brothers and for documentaries produced by the BBC, the History Channel, and Discovery. PatrickkODonnell.com @combathistorian