The U.S. Senate voted in the early hours of Wednesday to approve the rules for President Donald Trump’s impeachment trial.

After U.S. Chief Justice John Roberts convened the proceedings on Tuesday, the two sides began more than 12 hours of heated debate over Senate Majority Leader Mitch McConnell’s proposed rules for the trial before his outline was finally approved, solidly rejecting Democratic demands for more witnesses to support their case.

The Senate voted along party lines 53-47 to adopt the trial plan, which allows opening arguments from House lawmakers prosecuting the case to begin later in the day. 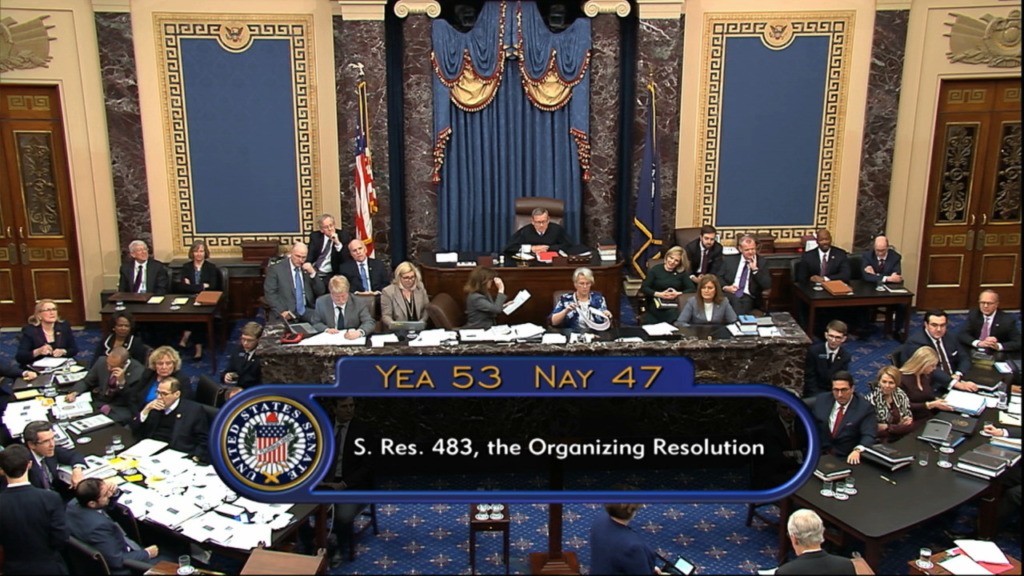 In this image from video, the vote for passage approving the rules for the impeachment trial against President Donald Trump in the Senate at the U.S. Capitol in Washington, Wednesday, Jan. 22, 2020 is displayed. Senate resolution 483 passed along a party-line vote of 53-47. (Senate Television via AP)

“It’s about time we bring this power trip in for a landing,” said White House counsel Pat Cipollone, the president’s lead lawyer, lashing out at the House Democrats prosecuting the case.

“It’s a farce,” he said about the impeachment proceeding, “and it should end.”

He cautioned both the House managers and the president’s counsel in equal terms to remember they are addressing the world’s greatest deliberative body and to act and speak accordingly.

Under McConnell’s now approved set of trial procedures, there will be 48 hours of opening arguments – 24 hours per side – over six days. It also allows the House’s record of the probe to be admitted as evidence.

The arguments will begin when the trial resumes at 1 p.m. (1800 GMT) on Wednesday.