As Breitbart News reported, the campaign calling for an end to the Ethiopian’s controversial reign began on January 31.

That’s when the petition titled, “Call for the resignation of Tedros Adhanom Ghebreyesus, WHO Director-General,” appeared on Change.org, citing Tedros’ refusal on January 23 to designate the Chinese coronavirus a global health emergency. 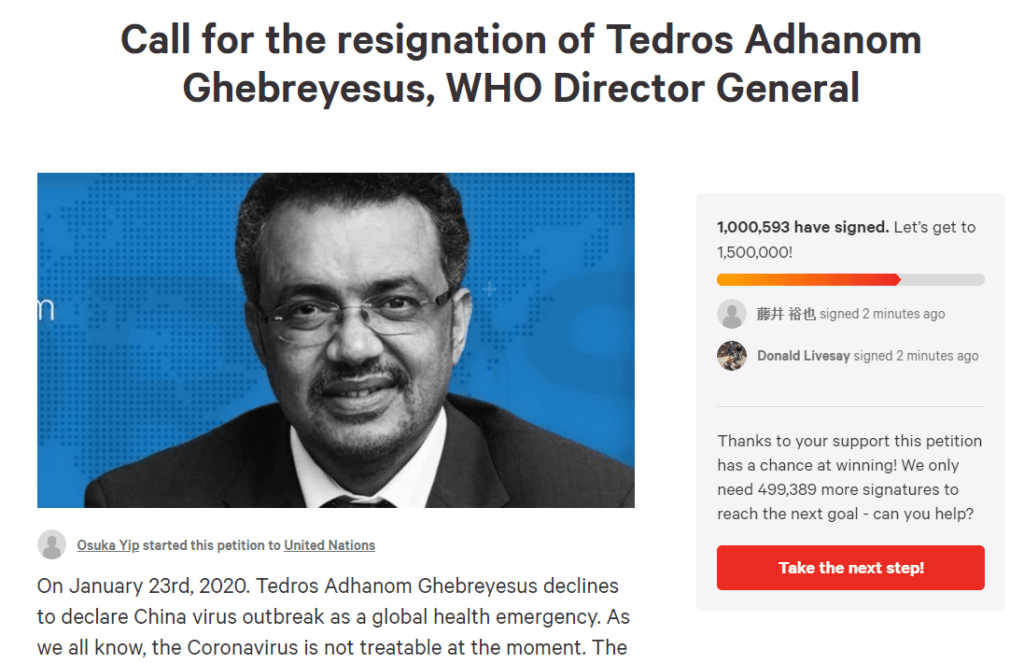 An anonymous Taiwan activist using the ID “Osuka Yip” launched the call, reflecting global concerns Tedros has been economical with the truth since the deadly virus it was first isolated in the southern Chinese city of Wuhan last November.

Such is the clamor of disapproval surrounding the Ethiopian bureaucrat that last week U.S. President Donald Trump ordered a hold on funds sent to the U.N. body, demanding they answer for their failures to properly warn the world about the deadly virus.

The president also criticized the W.H.O. for attacking his travel ban on China during the early days of the pandemic:

He pointed out the W.H.O. played a role in “mismanaging and covering up” the spread of the coronavirus around the world.

“The W.H.O. pushed China’s misinformation about the virus, saying it was not communicable and there was no need for travel bans,” Trump said.

On January 14, months after health officials are believed to have detected the first case of the virus in China on November 17 of last year, the W.H.O. was promoting a Chinese claim via Twitter that there was “no clear evidence of human-to-human transmission.”

Meanwhile, the disease was spiraling out of control. The W.H.O. tweet came a day before the first case to reach the United States reportedly flew from Wuhan to the state of Washington.

This is not the first time Tedros has drawn public criticism in his role.

The role of good-will ambassador is largely symbolic, but rights groups were scathing in their reaction to the symbolism of giving it to a man whose leadership, they say, has led to the collapse of its health service and major rights abuses in Zimbabwe.

Ultimately, Tedros rescinded his decision to name Mugabe “goodwill ambassador” in the wake of criticism.