Some 200000 flags now cover part of the National Mall and will represent those unable to travel to Washington, DC, for Wednesday’s inauguration of President-elect Joe Biden.

The display was organised by the Presidential Inaugural Committee.

Echoing the “America United” theme chosen for inauguration week, the display features 191,500 U.S. flags and 56 pillars of light, the latter chosen to symbolise every U.S. state and territory, according to the Presidential Inaugural Committee.

The committee told the Associated Press the theme reflects the beginning of a new national journey as well as being a way of paying regard to those forced to stay away due to the coronavirus.

Alexandra Jaffe, a national political reporter for the AP, said the artwork will be overcast by fences and armed guards protecting the area for the event.

As Breitbart News reported, D.C. remains locked down with street and bridge closures dominating the city and “core areas” of the National Mall regarded as out of bounds to potential guests and observers.

While permitted demonstrations will be allowed in on the day to take up “designated locations,” they will be “limited in number and participants will be screened prior to entry and escorted to their permitted location, in addition to other safety related requirements.” 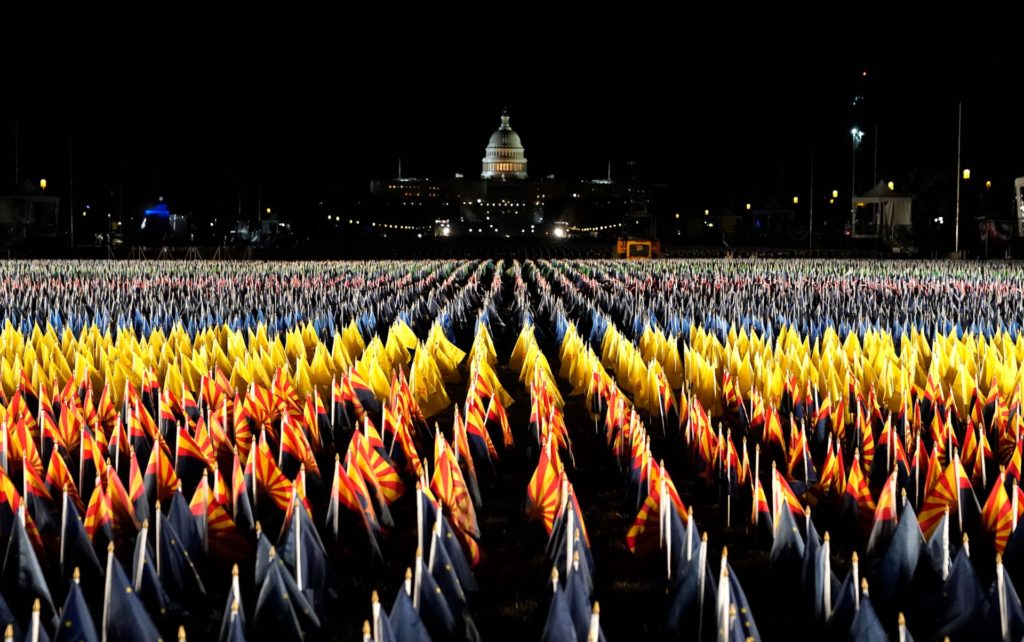 The “Field of Flags” on the National Mall as the U.S. Capitol Building is prepared for the inauguration ceremonies for President-elect Joe Biden and Vice President-elect Kamala Harris on January 18, 2021 in Washington, DC. (TIMOTHY A. CLARY/AFP via Getty Images)

Thousands of National Guard troops are now in the city in the wake of the January 6 Capitol protest. However, the FBI is now expected to vet the 25,000 troops to allay any security concerns.

”We’re continually going through the process, and taking second, third looks at every one of the individuals assigned to this operation,” Army Secretary Ryan McCarthy told the Associated Press.