Nearly all Americans who want more diverse immigration also prefer to live with neighbors who share their customs and habits, according to a new survey by the Cato Institute.

Immigration advocates “don’t want to be living in a place with some Hondurans in cowboy hats whose aspiration is to buy a pickup truck in the United States,” Mark Krikorian, director of the Center for Immigration Studies, told Breitbart News. “They say they want those people [in the United States], and they’ll buy something from them and have their pictures taken with them, but they don’t want to live in their neighborhoods.”

The shared preference for less neighborhood diversity is packaged with starkly negative views about Americans who want less immigration, according to the Cato Institute’s March 5-15 survey of 2,600 U.S. adults on attitudes about migration. The survey had a margin of error of +/- 2.21 percent.

“Democrats stand out, however, with 70% saying that racist beliefs motivate demand for less immigration,” the report said. “In contrast, 60% of independents and 88% of Republicans believe intentions [for reducing migration] are sincere[ly]” non-racist, the report said.

In an initial question, 29 percent of Americans said they want to expand immigration, while 33 percent want to see it reduced, according to Cato. Thirty-six percent default to “preserving the “present level” of immigration.

In another preliminary question, roughly four in ten of the 29 percent who claimed they want more migration said opponents of more migration are “immoral,” according to the survey. Roughly six in ten, however, say the dispute with migration opponents is just a disagreement.

The question was “Do you think people who want to reduce immigration to the United States are motivated by racist beliefs or a sincere interest in controlling our borders?”

Sixty-six percent of people who want immigration raised by “a lot” said the disagreement is motivated by racism.

Seventy percent of the people who want immigration raised “somewhat” labeled the disagreement as racist.

It is not clear if this claim of racism is tied to the respondents’ understanding of immigration numbers and economics, or if it is mostly a useful weapon against Americans in a rival political term.

The possibility tribal loyalties drive the racism claim is not explored by the Cato survey.

But the survey did reveal a huge gap in respondents’ knowledge about levels of immigration. For example, one early question revealed 29 percent of respondents say they want to raise immigration.

But a subsequent, more detailed question showed only 20 percent showed they want to raise migration — while 61 percent want to cut migration by at least half. 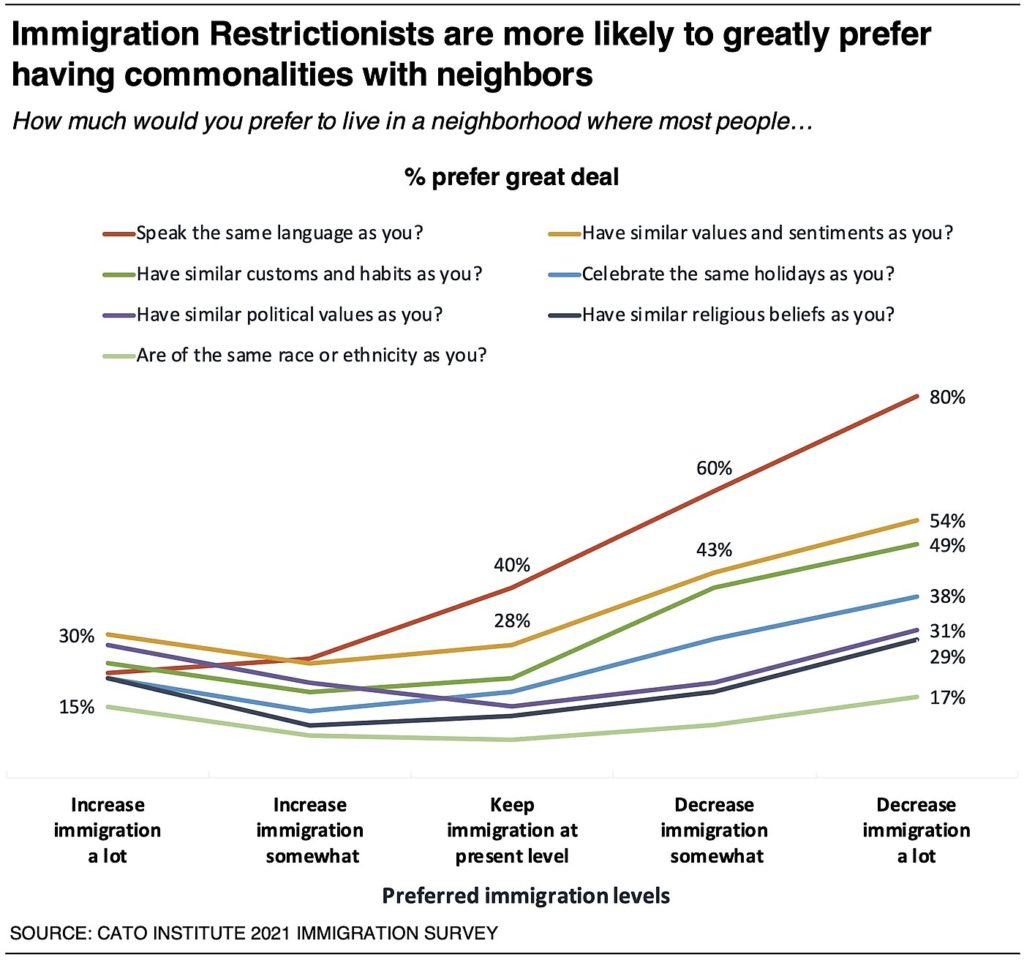 The differences are more muffled when the respondents are sorted by party.

Ninety-two percent of Democrats and 95 percent of Republicans prefer neighbors who speak the same language.

Ninety-one percent of Democrats and 96 percent of Republicans prefer neighbors who “have values and sentiments as you.”

Eighty-eight of Democrats and 94 percent of Republicans prefer neighbors who “have similar customs and habits as you.”

Fifty-four percent of Democrats and 58 percent of Republicans prefer neighbors who are of “the same race or ethnicity as you.”

But the report also showed “immigration Expanders” often look down on their fellow Americans, Cato reported:

On net, immigration Expanders perceive immigrants from Asia, Latin America, Europe, and Africa to be more likely than [every group of] native-born Americans to work hard at their jobs, be intelligent, have stable family situations, be loyal to America, and share American values, and less likely to receive welfare and commit violent crimes.