President Joe Biden’s administration has used a United States military base in Texas to fly nearly 800 border crossers into the United States.

Carlson said the Pentagon confirmed to him that the secretive operation is occurring under the guise of the Department of Homeland Security’s “mission.” The Immigration and Customs Enforcement (ICE) agency, though, refused to disclose where in the U.S. border crossers are being flown.

While still not disclosing where the migrants are being flown in the U.S., DHS officials confirmed to San Antonio Express-News that about 780 border crossers were flown into the U.S. via Laughlin Air Force Base since June 29.

The use of a military base is only one way the Biden administration is keeping border crossers in the U.S. rather than returning them to their native countries. 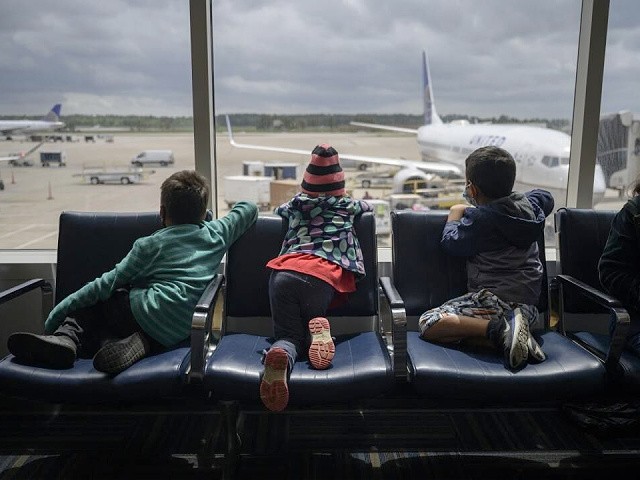 Siblings Dariel (L) ]and Diana (C) from Honduras sit with Daniel (R) from El Salvador at Houston airport during a transfer on March 30, 2021 after being released from a US government holding facility for illegal migrants seeking asylum in McAllen, Texas.

The latest available data, from February 19 to April 22, reveals the Biden administration has flown about 7,200 border crossers into the U.S. interior on domestic commercial flights. Border crossers are allowed to bypass photo identification requirements, boarding flights without a photo ID, and do not have to prove they are negative for the Chinese coronavirus.