Gaetz, in the 30-minute-long episode shared in advance with Breitbart News, slammed the “war cartel” in Washington that includes both Democrats and Republicans such as Rep. Liz Cheney (R-WY).

“Biden is right to get the hell out. The American people were lied to for decades by warmongers in both political parties,” Gaetz said in the preview. “You were lied to, endlessly. By generals acting like politicians and politicians parading around like tough generals. Real toughness is standing up to the military industrial complex.”

The Biden Administration is poised to end the U.S.’s involvement in the war by the end of August, ahead of the 20th anniversary of September 11, 2001, the terrorist attack that prompted the U.S. combat mission in Afghanistan. The U.S. military’s original mission was to topple the Taliban in Afghanistan for giving safe haven to the al Qaeda terrorist masterminds. 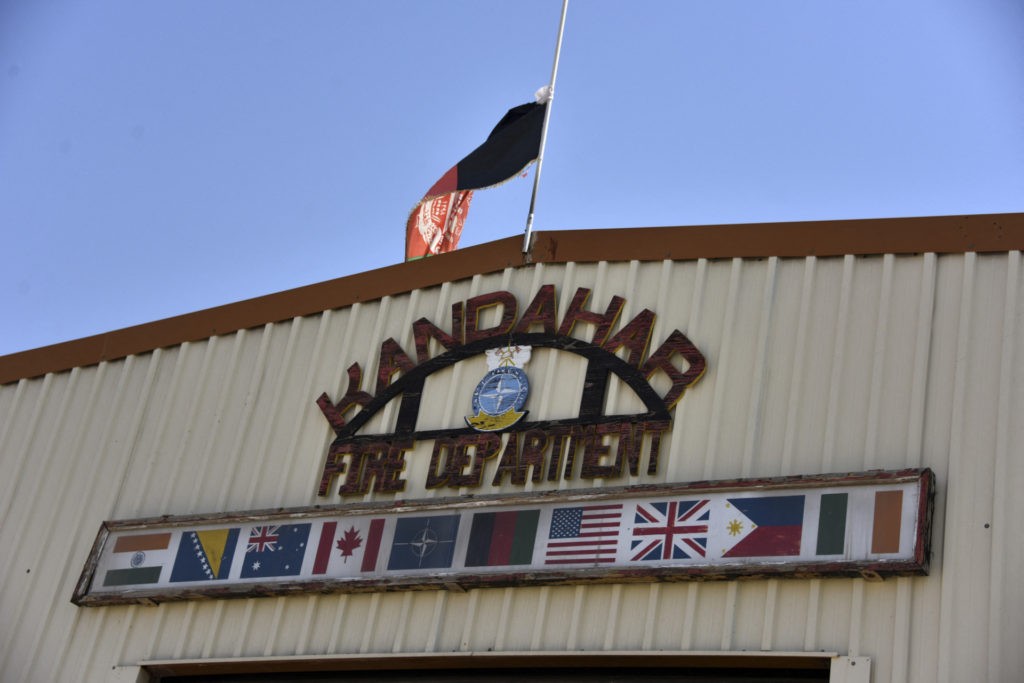 In this photograph taken on April 29, 2021 an Afghan national flag flutters on a mast at the Kandahar fire department in a former U.S. military base in Kandahar. (JAVED TANVEER/AFP via Getty Images)

Although that was accomplished quickly, the mission shifted to nation-building in Afghanistan, including training an Afghan military and building democratic government institutions. The Taliban regrouped, however, and has been waging a war against U.S. troops and allied troops and their Afghan allies since.

Gaetz said the United States has spent enormous blood and treasure — $2 trillion and 2,442 American lives — on trying to build a democracy in Afghanistan, which he believes will be taken over by the Taliban.

“This is what failure looks like. The Afghan government we propped up were never going to fight and win,” he said. “Adjusted for inflation, the United States spent more money on nation building efforts in Afghanistan than it did with the Marshall plan, which revived Europe after World War II. Would this have occurred if our leaders weren’t such liars and crooks?”

The losers of this 20 year effort, clearly the United States government and the Afghanistan democracy hypothesis. The winners? The Taliban and the United States military industrial complex. Whether we’re winning or losing, their stock goes up as long as we are fighting and bleeding and dying. The American era of regime change stupidity needs to be over.

In the episode, Gaetz also slams fellow Republican Rep. Mike Rogers (R-AL), ranking member of the House Armed Services Committee for supporting the Pentagon’s plan to require the military to be vaccinated against coronavirus.

“What’s so frustrating is that the lead Republican on the House Armed Services Committee Mike Rogers endorsed and went along with this decision. He noted that 70 percent of the military is vaccinated now, and he thinks that number should be 100 percent,” he said.

Here’s the problem. With the way they’re hunting people over this faux sense of extremism in the military and now this, it’s almost like they’re trying to drive out anybody who’s capable of independent thought. Similarly, we don’t know the long term impacts of this vaccine on readiness, on the human body. And the fact that we’re forcing military families to take this vaccine before it goes through the normal process — that’s deeply troubling to me.

He concluded: “Republicans should be fighting against this decision and not supporting it like Mike Rogers has.”