Vulnerable Democrat Rep. Cindy Axne (IA), the lone congressional Democrat from Iowa, has reportedly voted 100 percent of the time with House Speaker Nancy Pelosi (D-CA) on her partisan agenda items, causing rising prices on goods in her own state.

According to ProPublica, a left-wing investigative journalism outlet, comparing the voting records of Axne and Pelosi during the current 117th Congress reveals they agreed on 100 percent of votes.

In the Democrat-led Congress, the majority party has passed countless bills that have caused inflation to rise–in return, also raising the price of everyday goods.

Reportedly, the food costs in Axne’s home state were rising because of the spending. “Food and drink demand is expected to soar at the fair this year, but ingredients, supplies and staff are all in short supply,” Axios reported regarding the rising prices affecting the Iowa State Fair.

The report also added that most patrons at the fair would likely have to pay up to a couple of dollars more for their favorite foods than they probably originally expected because of the lack of supplies.

The National Republican Congressional Committee spokesman Mike Berg told Breitbart News in an email, “We want to remind Iowans that their Congresswoman Cindy Axne’s voting record is indistinguishable from that of House Speaker Nancy Pelosi. Not even the State Fair is safe from the rising prices caused by Axne and Pelosi’s reckless spending.”

The NRCC said that during the Iowa State Fair, they were “providing free fans to State Fair attendees and reminding them Cindy Axne is Pelosi’s number one fan.”  The hand-operated fan (shown below) was handed out at the fair. In small print, it says, “Paid for by the NRCC.” 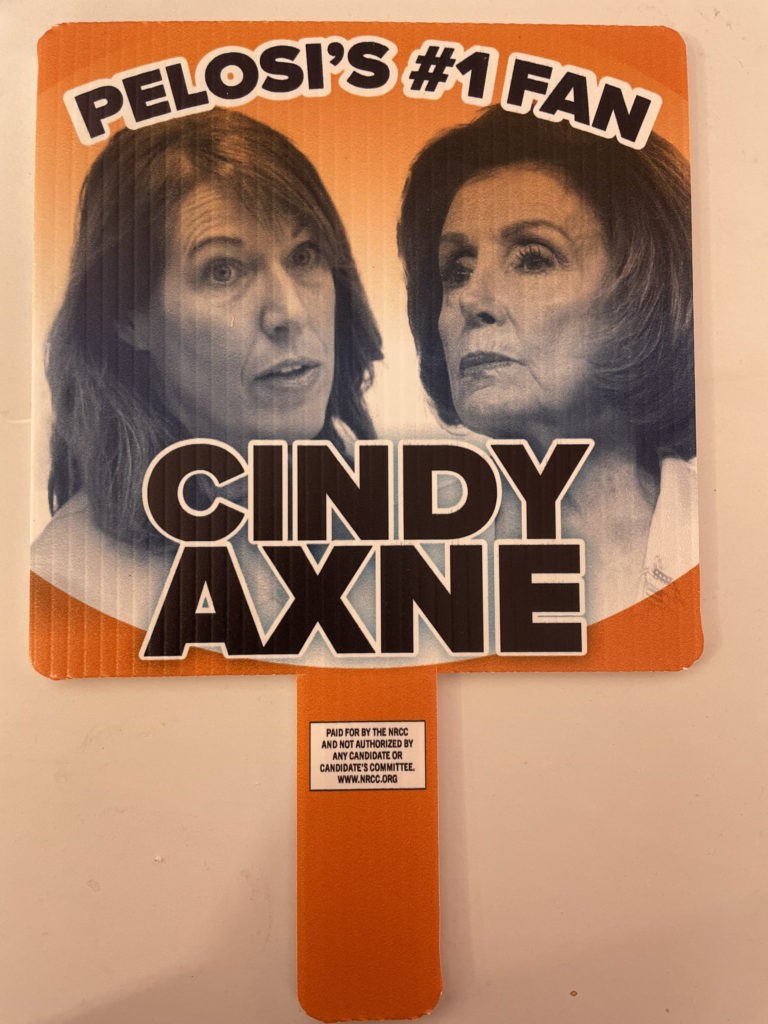 Hand-fans paid for by the NRCC that was handed out at the Iowa state fair. It reads “PELOSI’S #1 FAN” and displays a picture of House Speaker Nancy Pelosi (D-CA) and vulnerable Iowa Democrat Rep. Cindy Axne (NRCC press release).

Last week, House Majority Leader Steny Hoyer (D-MD) announced the House will cut their August recess short, and Pelosi is sacrificing vulnerable members such as Axne to try to advance their partisan agenda items that could make the rising inflation go faster.
Using her power as speaker, Pelosi has tried to force the Senate’s hand in passing a $3.5 trillion Trojan horse reconciliation package, which is full of far-left items.

Pelosi said she will keep the so-called infrastructure bill hostage in the House until the reconciliation package is passed in the Senate.