A restaurant owner in Debary, Florida, says she doesn’t want business from supporters of President Joe Biden in the wake of the terror attack in Kabul which killed 13 U.S. service members and dozens of Afghans.

“If you voted for and continue to support and stand behind the worthless, inept, and corrupt administration currently inhabiting the White House that is complicit in the death of our servicemen and women in Afghanistan, please take your business elsewhere,” Angie Ugarte, who owns DeBary Diner, wrote in a sign posted on the restaurant’s front door. 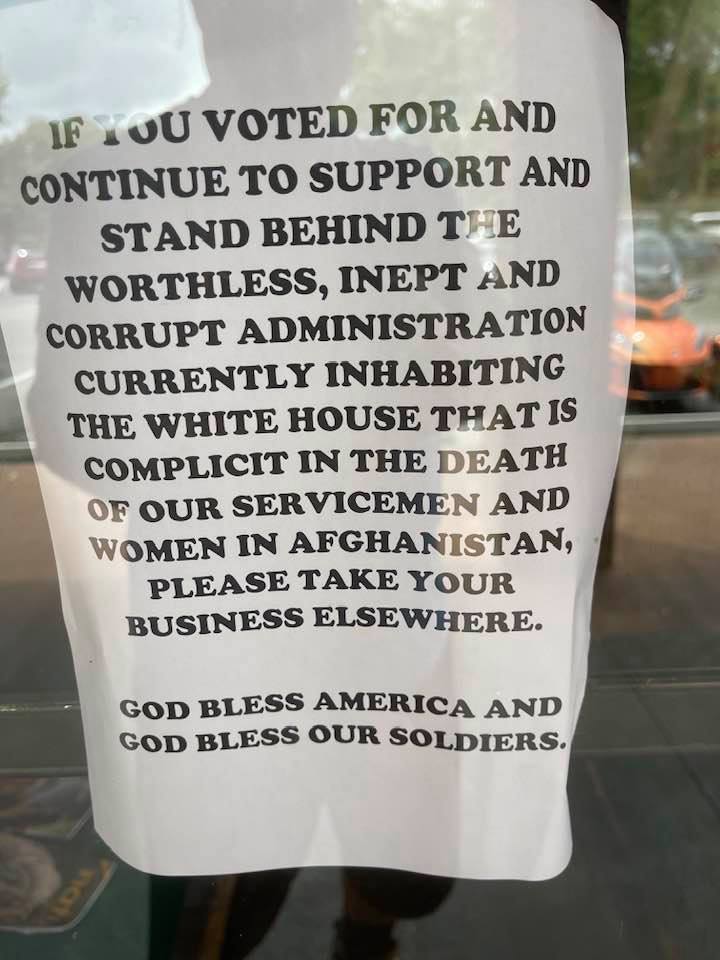 In an interview with FOX 35 News, Ugarte said she put up the sign on the same day as U.S. troops were killed.

“It was the only thing I felt like I could do,” Ugarte said. “I was just angry. I was just let down. I felt like one of those mothers, or wives, or sisters who were gonna get that knock on the door.”

“If you really, really still stand behind what’s allowed this to happen and the way it happened – which was unnecessary then I really don’t want to be associated with you in any way and I certainly don’t want your business,” she added. “I’ve had people come to the door and look at it and turn around and walk away. And I’ve had people come into the kitchen while I’m cooking and say, ‘Hey, I love your sign.’”

Eleven of the 13 U.S. service members who died in the Kabul attack were Marines. One was an Army soldier and another was a Navy corpsman.

The dead ranged in age from 20 to 31 and came from California and Massachusetts and states in between. Five were just 20 — born not long before the attacks of Sept. 11, 2001, which spurred the United States to invade Afghanistan in order to topple al-Qaida and dismantle their Taliban hosts who ruled the country.

They include a 20-year-old Marine from Wyoming who had been expecting his first child in three weeks and a 22-year-old Navy corpsman who in his last FaceTime conversation with his mother assured her that he would stay safe because “my guys got me.”

At their deaths, the 13 young service members were on the ground for the U.S. coda to its longest war, assisting a chaotic evacuation of Americans and of Afghans who helped the U.S. war effort and are now fleeing the Taliban after their return to power.