In his first address to the American people after completely pulling out of Afghanistan, President Joe Biden admitted he was leaving ten percent of Americans, who the United States intended to evacuate, in the country now controlled by a jihadist organization.

The president during the speech said, “the bottom line” — now that the U.S. evacuations are complete and service members will not be shuttling Americans and high-risk Afghans out of the country — is only “90 percent of Americans in Afghanistan who wanted to leave were able to leave. And for those remaining Americans, there is no deadline. We remain committed to get them out if they want to come out.”

By saying this, Biden is openly admitting to the country — and the world — there are still ten percent of Americans who the U.S. wanted to evacuate out of the country left there by Biden.

Taliban fighters atop a Humvee vehicle take part in a rally in Kabul on August 31, 2021 as they celebrate after the US pulled all its troops out of the country to end a brutal 20-year war — one that started and ended with the hardline Islamist in power. (Hoshang Hashimi/AFP via Getty Images)

Biden, in his remarks, echoed the words of U.S. Secretary of State Antony Blinken from Monday, not being able to give the exact numbers of Americans left, claiming that they made their best effort to take as many out as they can, but there are still Americans left.

“Now, we believe that about 100 to 200 Americans remain in Afghanistan, with some intention to leave. Most of those who remain are dual citizens, longtime residents who had earlier decided to stay because of their family roots in Afghanistan,” Biden said.

Biden added that there is no deadline for Americans trapped in Afghanistan who still are trying to come to the U.S. 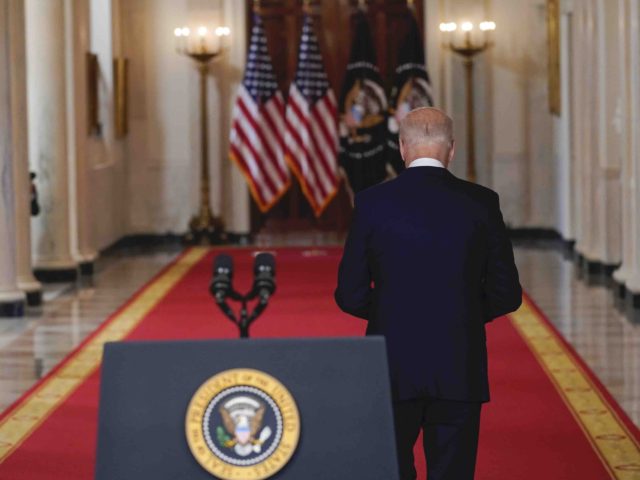 President Joe Biden walks from the podium after speaking about the end of the war in Afghanistan from the State Dining Room of the White House, August 31, 2021, in Washington. (AP Photo/Evan Vucci)

“Secretary of State Blinken is leading the continued diplomatic efforts to ensure safe passage for any American, Afghan partner, or foreign national who wants to leave Afghanistan,” he said.