State Department official William Malzahn spoke August 31, 2021, at the Seventh Conference of States Parties to the Arms Trade Treaty and made clear the Biden Administration is committed to international gun control.

Malzahn is the Acting Deputy Director of the Office of Conventional Arms Threat Reduction at the U.S. Department of State.

He spoke about the Conventional Arms Transfer Policy (CAT), the current guiding policy for “arms transfers,” noting that the Biden Administration has been working to strengthen CAT. He stressed that the changes in CAT were guided by “respect for international law and human rights and U.S. national security interests in arms transfers.” 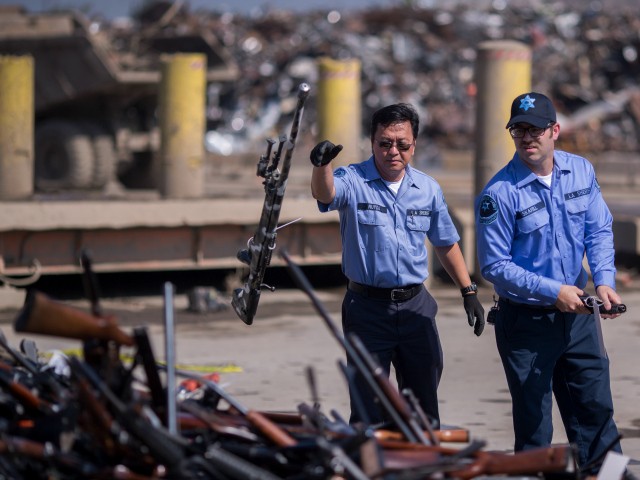 Deputies toss guns onto a pile of approximately 3,500 confiscated weapons to be destroyed at Gerdau Steel Mill under supervision of the Los Angeles County Sheriffs Department and other law enforcement agencies on July 19, 2018 in Rancho Cucamonga, California. The weapons were seized in criminal investigations, probation seizures and gun buyback events, and will be recycled into steel rebar for the construction of highways and bridges. (David McNew/Getty Images)

Malzahn also pointed out that the revised CAT policy will provide a “framework to review specific arms transfer issues, including determining the proper relationship of the United States to the Arms Trade Treaty.”

The 2016 push came after Obama’s failure to secure ratification in 2013 garnered a lot of attention. Breitbart News reported the treaty was signed by Secretary of State John Kerry on September 25, 2013, but it was not binding because Republican Senators shot down ratification efforts.

The NRA warned against the Arms Trade Treaty in 2013, noting, “This treaty threatens individual firearm ownership with an invasive registration scheme [and is full of regulations and requirements that are] blatant attacks on the constitutional rights of every law-abiding American.” 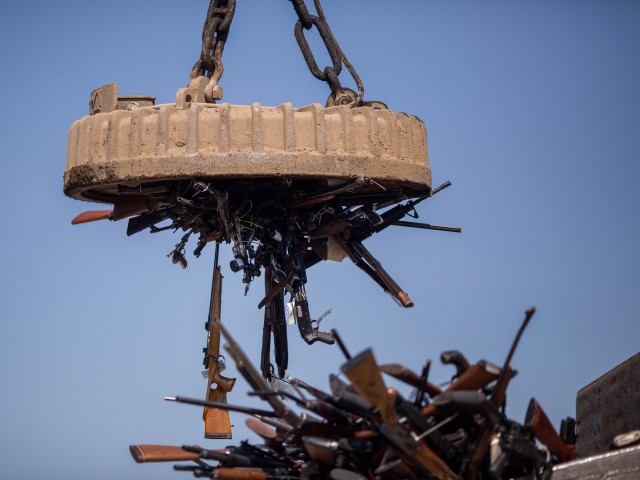 An electromagnet is used to pick up some of approximately 3,500 confiscated guns to be melted down at Gerdau Steel Mill on July 19, 2018, in Rancho Cucamonga, California. (David McNew/Getty Images)

The “registration scheme” referenced by the NRA is the treaty’s means of monitoring and controlling the movement of “small arms and light weapons across borders.” To that end, the treaty encourages records for “end use or end [users]” to be maintained for “a minimum of ten years” after the weapons reach their final destination. This requires the creation of a database of sales records – which would include information on the weapons and the owners – and that information would be internationally maintained; after all, this is a U.N. treaty.