“Joe Biden told Americans when he was elected that he would not impose vaccine mandates. He lied,” McDaniel said. “Now small businesses, workers, and families across the country will pay the price.”

“Like many Americans, I am pro-vaccine and anti-mandate,” she added.

“Many small businesses and workers do not have the money or legal resources to fight Biden’s unconstitutional actions and authoritarian decrees,” the chairwoman explained.

But when Biden’s “decree” becomes effective, she declared that “the RNC will sue the administration to protect Americans and their liberties.” 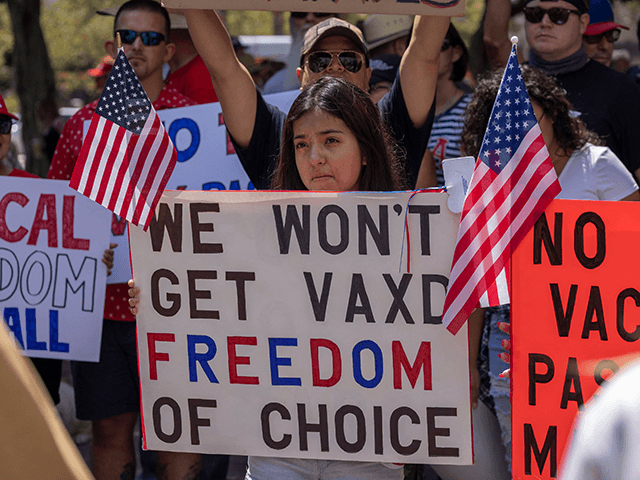 Anti-vaccination protesters pray and rally near City Hall following the Los Angeles City Council vote earlier this week to draw up an ordinance to require proof of vaccination to enter many public indoor spaces in Los Angeles, August 14, 2021. (Photo by DAVID MCNEW/AFP via Getty Images)

The White House released Biden’s Chinese coronavirus “Action Plan,” noting that the Department of Labor’s Occupational Safety and Health Administration (OSHA) will come up with a plan for all private companies with 100 or more employees to require every employee to receive the vaccine or produce weekly negative test results.

As McDaniel pointed out last December, Biden told reporters at the time that he did not support any type of widespread vaccine mandate.

“I don’t think it should be mandatory. I wouldn’t demand it be mandatory,” he told reporters at the time.

However, Thursday, just before the RNC announced their intentions to sue the administration, Biden said during his speech at the White House, “This is not about freedom or personal choice. … It’s about protecting yourself and those around you” as his reasoning to mandate vaccines.