Former President Donald Trump visited with police officers and firefighters in New York City on Saturday and questioned why President Joe Biden decided not to deliver a speech to recognize the 20th anniversary of 9/11. 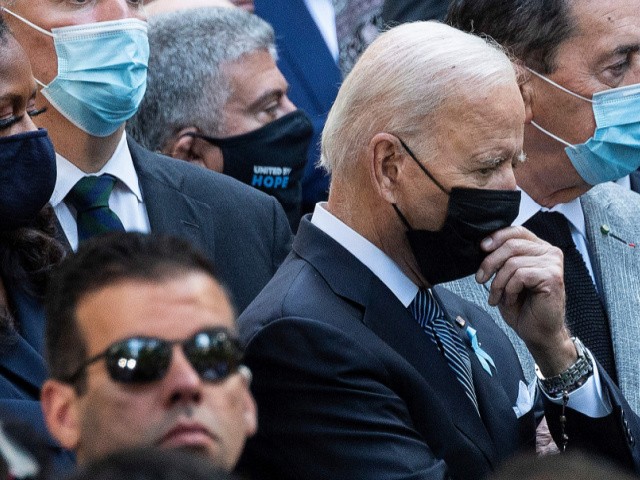 US President Joe Biden attends the ceremony at the National 9/11 Memorial marking the 20th anniversary of the 9/11 attacks on the World Trade Center, in New York, on September 11, 2021 (JIM WATSON/AFP via Getty Images).

The former president visited the precinct to thank officers for their service, spending much time criticizing Biden’s disastrous exit from Afghanistan.

“He turned victory into a total embarrassment; I say the most embarrassing moment in the history of our country,” Trump said.

The former president said he watched some of the other speeches from 9/11 but noted that no one was talking about Biden’s failure.

“They’re trying to do speeches without mentioning what happened over the last two weeks, and that’s a very hard thing to do,” Trump said.

He accused Biden of surrendering to the Taliban in the war for political reasons.

“I think he wanted to run because he wanted to look good today,” he said, pointing to the 20th anniversary of the 9/11 attacks.

Trump said he could not understand why Biden pulled the military out of Afghanistan before getting all Americans out of the country.

“We surrendered, and we can’t let that happen,” he said.

Trump expressed his sadness for the 13 American servicemembers who were killed by twin suicide bombings outside the airport in Kabul.

“Those 13 warriors who were killed, I spoke to some of those parents; they will never be the same,” he said.

Trump recalled that when he was president, he negotiated with the Taliban, noting that if any Americans were killed, he responded with strength.

He said he would have stayed as long as it took to get Americans out of the country and get all of the military equipment out of Afghanistan.

“We could have stayed there for ten years if we wanted; they couldn’t have done a damn thing,” Trump said.

He said he would have conducted the end of the war from Afghanistan with honor even though he did not support the war.

He said if Democrats spent as much time focused on Afghanistan as they did on the “rigged” 2020 election, they could have succeeded.

“This war would have been over 20 years ago. You wouldn’t have had a war,” he said, adding, “You wonder whether or not they love their country.”