Conservative talk radio host Larry Elder told supporters to be “gracious in defeat” as he conceded the results of the recall election on Tuesday night, which Gov. Gavin Newsom (D) won in a landslide, crushing an effort to unseat him.

As of Wednesday morning, the “no” vote led the “yes” vote by nearly two-to-one (64.2.% to 35.8%), a stunning result given that several polls of likely California voters in late July showed Newsom within the margin of error or even losing.

“We may have lost the battle, but we are going to win the war,” Elder told supporters, urging them to take heart that they had drawn attention to key issues like public school choice. Notably, he stopped short of congratulating Newsom himself. 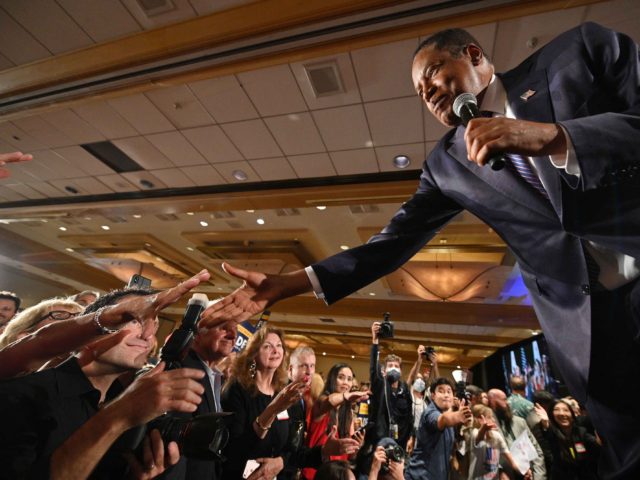 Newsom and his Democratic allies spent a fortune to beat back the recall. They did so not by running a campaign on the governor’s accomplishments, but by scaring Democratic voters about the prospect of “Trumpism” in the Golden State.

Aside from touting Newsom’s recent vaccine mandates, which are popular with the Democratic base, the anti-recall effort was entirely negative — and devoted particular zeal to demonizing Elder, who was demonized by the establishment media.

Newsom remained silent as the media, and his supporters, attacked Elder in explicitly racial terms, with one speaker at a Newsom event calling Elder the “black face of white supremacy” in the governor’s presence, with no rebuke or response.

Newsom also declined to condemn a violent and racist assault on Elder last week, in which a white woman wearing a gorilla mask pelted Elder and his entourage with eggs. Nor did the media ask him to “disavow” the attack or the racism.

The recall effort, spurred by Newsom’s flouting of his own coronavirus requirements at an elite restaurant, did force him to govern, paying attention to parents outraged by school closures, and picking up a broom at a few homeless encampments.

But Newsom refused to offer any changes in his policies, nor did he express any regrets for the way he had governed. He was confident that his attacks on Elder, and the massive money advantage he enjoyed, would be more than enough to win.

In his remarks, Elder revisited many of his talking points from the campaign trail. After taking a break from his radio show, he has hinted that he would like to stay involved in California politics, and he has boosted his national profile.

But as for the state he sought to lead, it is now — more than ever — the sole responsibility of the Democratic Party.

Crime, poverty, homelessness, educational failure — all are firmly within the grasp of the Party, whose electorate has ratified its policies.