“HHS will determine the amount of product each state and territory receives on a weekly basis,” a spokesman for the U.S. Department of Health and Human Services (HHS) said at the time. This move directly affects southern states such as Florida, as Gov. Ron DeSantis (R) has spent recent weeks announcing the openings of more antibody treatment centers across the Sunshine State.

“To just kind of pull the rug out from anyone a week after the president said they were going to be increasing the distributions by 50 percent, it’s very, very problematic,” DeSantis said last month, vowing to “work like hell” to get people the treatment they so desperately need. 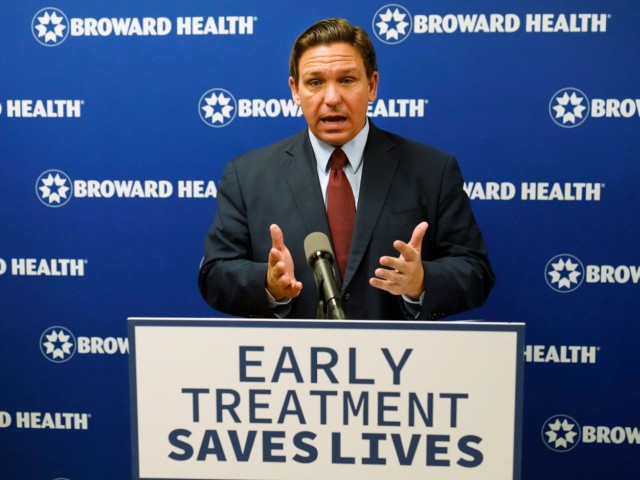 Florida Gov. Ron DeSantis speaks at a news conference, Thursday, Sept. 16, 2021, at the Broward Health Medical Center in Fort Lauderdale, Fla. DeSantis was there to promote the use of monoclonal antibody treatments for those infected with COVID-19 (AP Photo/Wilfredo Lee).

As a result of the Biden administration’s action, a group of Republican senators has introduced the Treatment Restoration for Emergency Antibody Therapeutics (TREAT) Act, which would prohibit HHS from “implementing policies that restrict hospitals and other appropriate healthcare providers from ordering and receiving COVID-19 monoclonal antibody (mAb) treatments directly from manufacturers and distributors.”

“The TREAT Act would nullify the Biden Administration’s recent policy requiring hospitals and other facilities to work through states to receive mAb supplies as well as cease the administration’s ability to throttle the state’s supply of this lifesaving treatment,” a press release of the announcement reads.

“The Biden administration is playing politics with the lives of Tennesseans,” Blackburn said, calling it a “prime example of how government-run healthcare interferes with the doctor-patient relationship and blocks access to lifesaving treatments.”

“This is rationing, and it is wrong,” she added.

Rubio described the Biden administration’s policy as “nothing but an attempt to punish Florida,” and Scott emphasized that the move is “making it harder for Floridians to receive this life-saving treatment,” describing it as both “unacceptable and unethical.”

“Rather than forcing states to create a distribution network that will cause unnecessary bureaucratic delays, we should leverage industry’s well-established networks through public-private partnerships that will ensure all patients have timely access to care,” Marshall said. Cramer noted that Biden’s change in distribution policy “does not reflect actual need across the country.”

“Our bill would prohibit the implementation of these policies that would restrict hospitals and other providers from receiving life-saving treatments where the need is greatest, regardless of partisan politics,” he added.

South Dakota Gov. Kristi Noem (R) spoke about Biden’s rationing of treatment during an exclusive On the Hill interview with Breitbart News last week. She believes Biden is withholding treatment for “political reasons.”

“I’ve talked with all my health systems because I have several in the state about what their supply is,” Noem told Breitbart News. “Some of them are doing okay; they feel like they have adequate supply as far as what their requests are, and they haven’t felt a pinch”:

I do have one that is really struggling getting the supply that they want — they believe they’re being rationed. I think somewhere in the federal government, they’re stockpiling it — and they are delivering it out to states based on what their cases are, and based on what they think their scientific data is telling them that South Dakota should have.

“We’re going to continue to pressure to have the kind of medical treatments that we believe our people deserve. So, we’re not at a shortfall right now but we have noticed a difference in how the federal government is responding to us,” she added: