The president has been aware of the problems for months, promising in August to monitor the situation and offer solutions.

“My administration is bringing together the port operators, shipping lines, the labor unions, trucking companies, railroads, and others to speed up the port’s operations,” Biden said on August 11.

He reassured Americans “these bottlenecks and price spikes will reduce as our economy continues to heal” and promised to monitor the situation.

Biden appointed John D. Porcari to as a “Port Envoy” for the administration on August 21, joining Transportation Secretary Pete Buttigieg to try and solve the shipping problems.

Container ships are anchored by Long Beach and Los Angeles as they wait to offload in clogged ports on September 20, 2021 near Los Angeles, California. (Mario Tama/Getty Images)

There are 146 cargo ships off the California coast waiting to get unloaded, according to reports over the weekend.

During an interview with MSNBC’s Morning Joe on Thursday, Buttigieg struggled to offer any reassurance that the Biden administration was making progress as the problem continued to worsen.

“Obviously it’s an incredibly complicated situation,” Buttigieg admitted, posing that the government was handling the problem by holding video conference “roundtables” of private companies, port operators, and labor unions to discuss the problems.

He argued his department was making short term gains, but warned Americans that it was a long term problem.

“Some of these things have been years and years in the making,” he said.

Buttigieg cited concerns about the number of available truck drivers, but said he was working with the Department of Labor to create more apprenticeships. 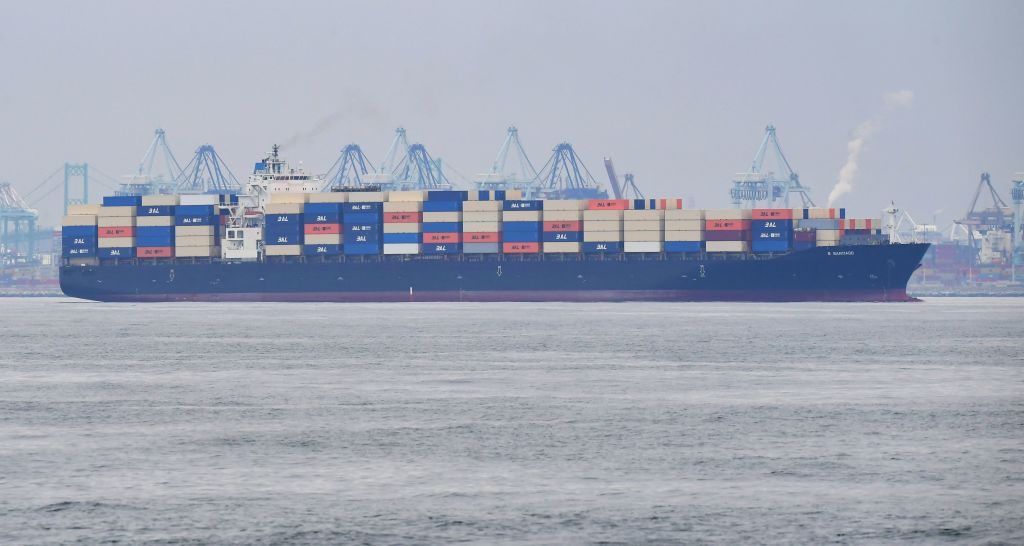 A cargo ship filled with containers waits offshore for entry to the Port of Los Angeles on October 6, 2021 in Los Angeles, California as supply chain disruptions continue to affect the US economy. (FREDERIC J. BROWN/AFP via Getty Images)

“The President recognizes that there are several, several layers of the challenge here that contribute to the bottleneck,” she said.

Psaki argued that Biden’s appointment of a port “envoy” was proof the administration was handling the crisis.

“The fact that he designated and — and appointed someone at that level with a range of vast experience shows that this is a part of the issue we’re absolutely focused on,” she said.