The alleged gunman behind the February 14, 2018, attack that killed 14 students and three staff members at Marjory Stoneman Douglas High School plans to plead guilty to “17 Counts of First-Degree Murder,” according to the Associated Press.

The AP reported that the 23-year-old suspect’s attorneys spoke on October 15, 2021, stating that the suspect will plead guilty on Wednesday.

The AP noted the admission of guilt “will come with no conditions and prosecutors still plan to seek the death penalty.”

The trial of the suspect has been delayed to this point due to the coronavirus and back and forth between prosecutors and defense attorney regarding evidence that was or was not admissible.

ABC News spoke with Manuel Oliver, father of 17-year-old Marjory Stoneman Douglas shooting victim Joaquin Oliver, who said, “I think it’s time to put some — speed it up a little bit. Every day is a new day that we suffer.” 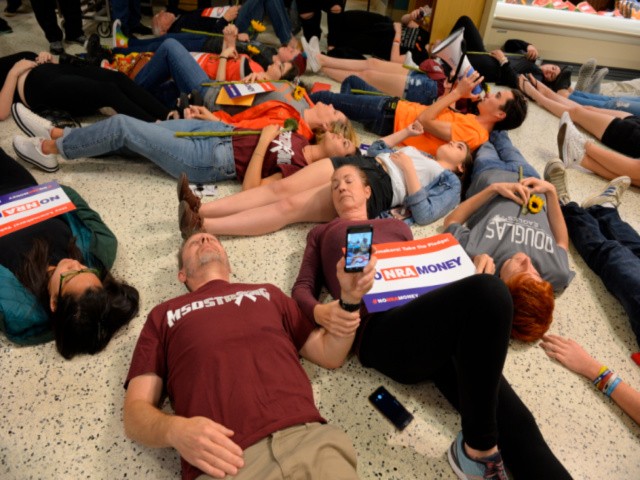 Student activist and shooting survivor David Hogg and other students in the parking lot of a Publix supermarket in Coral Springs in honor of victims of the mass shooting at Marjory Stoneman Douglas High School, at Pine Trail Park. (Hoo-Me.com / MediaPunch /IPX)

The shooting suspect allegedly used an AR-15 rifle in the attack and the Sun-Sentinel reported the suspect acquired the firearm via a background check.

In late 2018 the Marjory Stoneman Douglas High School Public Safety Commission noted that the armed suspect had time on his side once he entered the school and was able to reload five times during this attack.

On November 21, 2018, Breitbart News observed that Pinellas County Sheriff Bob Gualtieri, head of the Commission investigating the shooting, made clear that armed teachers are a necessity when it comes to taking away the advantages the shooting suspect enjoyed.

The Associated Press quoted Gualtieri saying, “People need to keep an open mind to it as the reality is that if someone else in that school had a gun it could have saved kids’ lives.”