President Joe Biden exaggerated Tuesday details of a fire that burned his home in 2004 while emphasizing the importance of infrastructure.

Speaking on a bridge in New Hampshire, Biden said:

And I know, having had a house burn down with my wife in it — she got out safely, God willing — that having a significant portion of it burn, I can tell: ten minutes makes a hell of a difference.

Biden has cited this story before, particularly while talking about the importance of firefighters.

According to reports, Biden’s Delaware house did not “burn down,” and a “significant portion” of his home did not burn.

The Associated Press reported at the time that lightning struck Biden’s home, but the fire was “small,” and firefighters responded quickly to a call from his wife, Jill Biden. Cranston Heights Fire Company Chief George Lamborn said they were able to keep flames from spreading beyond the kitchen.

Biden’s telling of the story demonstrates his repeated willingness to stretch the truth to demonstrate a point.

Previous versions of Biden’s house fire story have been more accurate, such as his retelling of the event at a wildfire center in Sacramento in September.

I got a phone call: Lightning strike hit — I live on a little pond — a 10-acre pond that borders my property. Hit a conduit in the side of the hill. It went up underneath and set on fire the internal part of my house, so the air conditioning just was billowing out smoke. When the fire company came, the smoke was so thick — not a joke. And the firefighters — I mean, you could not see in the house, from the basement floor all the way to the third floor. Not a single thing. And my fire service went and they saved my wife, and, as she says, saved the cat and my ‘67 Corvette. 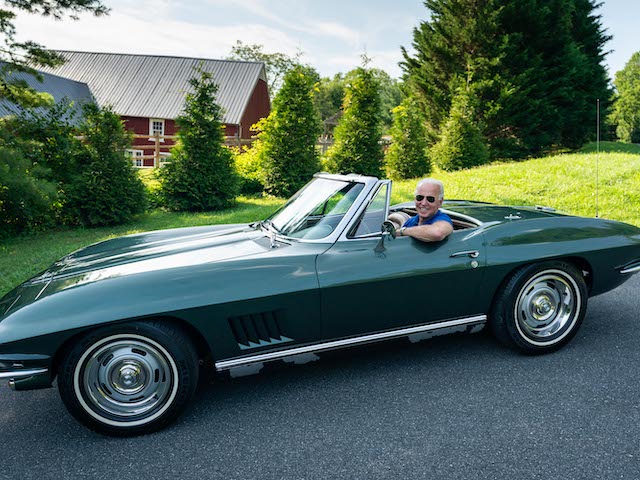 Joe Biden sits in his 1967 Corvette Stingray on July 16, 2020, in Wilmington, Delaware. (Adam Schultz/Biden for President/Flikr)

Biden also told the story in 2013 during the 25th Annual National Fire and Emergency Services Dinner of the Congressional Fire Services Institute.

I was down here doing a Sunday program, and lightning struck my home and destroyed a significant portion of it, and you got my wife out. …And in addition to my wife, you got my second-best love out of the house: my ‘67 Corvette. So thank you all. So I owe you. When I say I owe you, I mean I owe you.

Biden’s remarks about the fire on Tuesday sparked a response from Glenn Kessler, a fact-checker for the Washington Post.

Biden today: We "had a house burn down with my wife in it. She got out safely."
2004 AP news report: "A small fire that was contained to the kitchen….Jill reported the fire…The fire was under control in 20 minutes.'' https://t.co/2VcAebg9r5