Rep. Jackie Speier (D-CA), whose legacy will include championing the #MeToo movement, is not seeking re-election and is using the window before stepping down to take some parting shots, including calling for a mandatory retirement for lawmakers at age 75.

During an interview with the San Francisco Chronicle’s “It’s All Political” podcast, Speier was asked what she would like to see change in Washington, DC.

If members of Congress had to “return home” — Washington-speak for not seeking another term — at 75, that would mean a gold watch for several members of the Northern California delegation, including Reps. Anna Eshoo, D-Palo Alto, 78; Barbara Lee, D-Oakland, 78; John Garamendi, D-Walnut Grove, 78; and Doris Matsui, D-Sacramento, 77. Rep. Zoe Lofgren, D-San Jose, would be on deck when she turns 74 next month.

Sen. Dianne Feinstein, 88, wouldn’t have served her last two six-year terms under this idea. Thirteen members of the Senate — where the average age was 63 at the start of this term — are older than 75.

And yes, Speier’s cutoff would include her friend, Speaker Nancy Pelosi, who is 81 — and may have done her best work this year in shepherding President Biden’s two infrastructure bills through a fractious Democratic caucus.

Speier said she does not know Pelosi’s plans for certain. 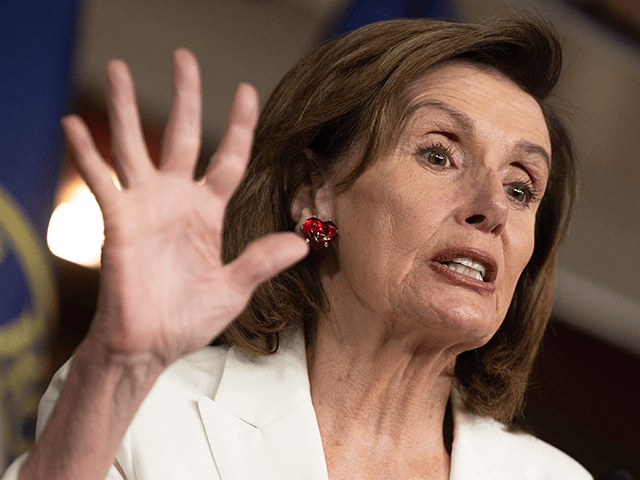 Speaker of the House Nancy Pelosi (C), D-CA, speaks during a news conference with Democratic leaders after the passage of the Build Back Better Act at the US Capitol in Washington, DC, on November 19, 2021. – US lawmakers voted to elevate President Joe Biden’s giant social welfare bill to the Senate, in major a step forward for his vision for a more equitable society that is the centerpiece of his domestic agenda. (Photo by Jim WATSON / AFP) (Photo by JIM WATSON/AFP via Getty Images)

Speier had an idea for Pelosi’s post-retirement agenda.

“I have this fantasy that when she does decide to leave — whenever that is — that she gets appointed ambassador to Italy,” Speier said.

“I wouldn’t be surprised if that’s where she ends up,” Speier said.

Speier’s political career began was elected to Congress in 2008 after surviving an attack by cult members that killed her boss at the time, Rep. Leo Jay Ryan (D-CA).

Speier recalled how she was inspired to have a career in public service after she accompanied her boss Ryan on a flight to Guyana in 1978 to rescue 900 followers of cult leader Jim Jones.

Ryan and four others were shot to death on an airstrip by gunmen who were followers of Jones. Speier, who was 29, was shot five times. Jones convinced followers to drink cyanide-laced punch in a mass murder-suicide.

“It’s time for me to come home,” Speier said of her stepping down. “Time for me to be more than a weekend wife, mother, and friend.”