The survey, which found 81 percent of Republican primary voters indicating that they would support Trump for the Republican nomination, asked respondents across the board, “If the 2024 Presidential election were held today, which one of the following best describes how you would vote in the general election for President between Donald Trump, the Republican candidate, and Joe Biden, the Democrat candidate, for whom would you vote?”

According to the survey, 49 percent say they would vote for Trump compared to 44 percent who said Biden. Of those who said they would support Trump, 37 percent said they “definitely” would, while 35 percent said the same for Biden. Seven percent, overall, remain undecided, which is larger than Trump’s 5-point lead.

Trump takes an even greater lead when Biden is replaced with Vice President Kamala Harris, leading her 51 percent to 40 percent.

Notably, the survey asked the same question with a potential rematch for Trump and Hillary Clinton. In that scenario, Trump trounces Clinton by double digits, 51 percent to 41 percent. 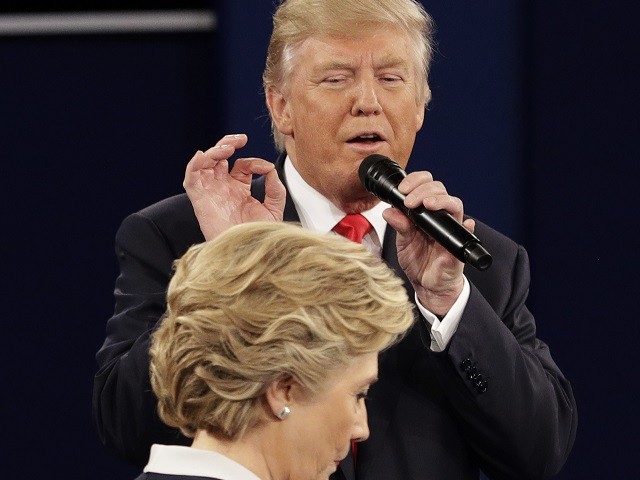 The survey comes as Biden’s approval ratings continue to sour one year into his presidency. Friday’s RealClearPolitics average showed Biden’s job approval tanking even further, with a net negative of -14.8 percent — 55.3 percent approving and 40.5 percent disapproving.

Notably, Biden reached his first year in office while failing to achieve many of his grandiose promises, including to shut down the Chinese coronavirus. What is more, he originally pitched “just” 100 days of masking to the American people, but he continues to urge them to do so, with no clear end in sight.

“As I’ve said in the last two years: Please wear a mask. If you’re in a — you know, I think it is part of your patriotic duty. It’s not that comfortable. It’s a pain in the neck,” Biden said during a speech last week.

“But I’ve taken every action I can as president to require people to wear masks in federal buildings and on airplanes and trains, because they’re inter- — they cross state lines,” he continued.

Notably, Americans’ opinions on Biden’s handling of the Chinese coronavirus pandemic began to sour particularly after his announcement of the Occupational Safety and Health Administration (OSHA) vaccine mandate in September, which the Supreme Court struck down this month.

Overall, most Americans say America is on the “wrong track” one year into Biden’s presidency, an Economist/YouGov survey released this week found.