Breitbart News Editor-in-Chief Alex Marlow appeared on Peter Schweizer’s podcast Drill Down and explained that “commie cash” is the reason why there is a media blackout of Schweizer’s new book, Red-Handed: How American Elites Get Rich Helping China Win.

Marlow started his appearance off by talking about the influence the Chinese Communist Party has not only on establishment media but smaller media outlets as well. He noted that Breitbart is one of few media outlets that have reported on Red-Handed.

Well take the Atlantic, for example, or Axios. I mean, these are all places that are funded by Laurene Powell Jobs, who’s the heiress of Steve Jobs’s fortune. Well, where did Steve Jobs’s fortune come from? It comes from Apple and Disney. They make all the money out of China, so China has completely co-opted much of the establishment media and has left truly independent outlets and only truly independent outlets who are willing to report on it.

Eggers brought up that Chinese-operated TikTok is actually banned in China, so Olympic athletes are given special SIM cards to access TikTok to engage with NBC’s advertising.

Marlow mentioned his theory that “TikTok is Chinese mind control,” noting that the app has captivated the “increasingly A.D.D. American mind” due to its endless scrolling.

The conversation shifted to China’s influence when Eggers showcased that China does not need to lobby in the United States because private companies do the job for them directly. He mentioned a Tucker Carlson report that found AT&T lobbied the U.S. Department of Commerce on behalf of China Telecom, a company the American telecom giant partners with.

“If AT&T, which owns CNN, is lobbying on behalf of their business partner in China, to overlook the [human rights] violations, it makes sense that they’re gonna not maybe put your report in or even reporting negative about China period,” Eggers said.

Marlow then explained that corporate media is beholden to Chinese cash flow, which is why there is a media blackout of Red-Handed.

Just know that whatever news you’re getting, the reason why there was a blackout on Peter’s Book is specifically because the book is powerful and it will hold the powers that be that will cost the bottom line of the shareholders of the corporations that control our news.

And every single one of those corporations to one degree or another wants that sweet, sweet Commie cash. And once you understand that, you understand so much of what is being reported and why we’re decades behind in terms of identifying and challenging the threat of Communist China.

Marlow pointed to NBC’s “sports-washing” of China’s “genocidal homicidal regime” with the Beijing Games as proof of China’s grasp on corporate media. “The only silver lining is that it will age so poorly,” he said. In addition to calling out NBC, Marlow named Disney, Apple, and Bloomberg as some of the top corporate lovers of China. 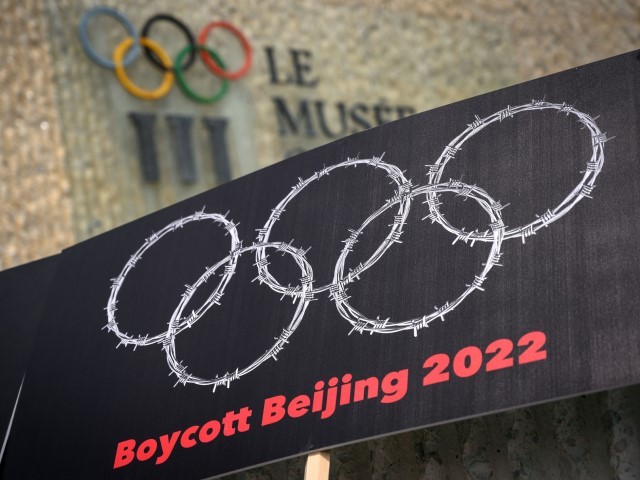 “I do think overall, probably Bloomberg is the worst just because their access is so big,” Marlow said.

When asked about potential solutions to hold corporate media accountable, Marlow said, “I think that there needs to be an effort from Republicans to not get any news to any corporate media outlet, you know.”

“So I think that’s where you start, and second of all, and I think this comes in again in Red-Handed, that there can’t be any lobbying on behalf of foreign governments in Washington, particularly China,” he added.

Marlow is the author of Breaking the News: Exposing the Establishment Media’s Hidden Deals and Secret Corruption.