Former Detroit Police Chief James Craig supports the Freedom Convoy protesters demonstrating on the Ambassador Bridge and finds it “shameful” and “hypocritical” that Michigan Democrat leaders are calling for their removal.

Craig, a Republican hoping to unseat one such Democrat, Gov. Gretchen Whitmer, in this year’s gubernatorial election, doubled down on his pro-protester position during an interview with host Matthew Boyle on Breitbart News Saturday after Whitmer ally Attorney General Dana Nessel attacked him for it.

“As you might recall, I was part of the 2020 ‘summer of love’ that so many talk about, and so it infuriated me because this is a great example of big government socialism. We see it here in our own country. We see it in our state,” Craig observed. “So, yes, I stand with those truckers for fighting for freedom,” he said, adding that he also stands with police officers.

Craig initially vocalized his support on Friday for the protesters on the bridge, which connects his city of Detroit and Windsor, Ontario, and serves as a major trade route between the U.S. and Canada.

Upon speaking out, Nessel directly attacked Craig, calling his stance “abhorrent” and accusing Republicans of belonging to the “party of lawlessness, insurrection, and anarchy.”

Coming from a former law enforcement officer, I find this abhorrent. Laws should be applied and enforced equally to everyone, irrespective of the motivation of those in violation of the law. This is why so many now feel free to disregard statutes which keep our society safe. https://t.co/hpyRrNsCAo

Once again, I ask the Republican candidates for MI Attorney General to state their position on this matter. Time to stop allowing Republicans to label themselves the party of “law and order.” They are, instead, the party of lawlessness, insurrection, and anarchy.

“The state AG, top cop of the state, who didn’t offer Detroit any support during this ‘summer of love,’ now you want to criticize me as it being appalling that I would support people who stand up for freedom? Shameful,” Craig said, also noting that her “hypocrisy” was “clear.”

Craig has an extensive background in law enforcement. He worked for the Los Angeles Police Department for about 30 years, then became police chief in Portland, Maine, and later Cincinnati, Ohio, and then stepped into the role of chief of the Detroit Police Department, where he served for eight years until 2021. 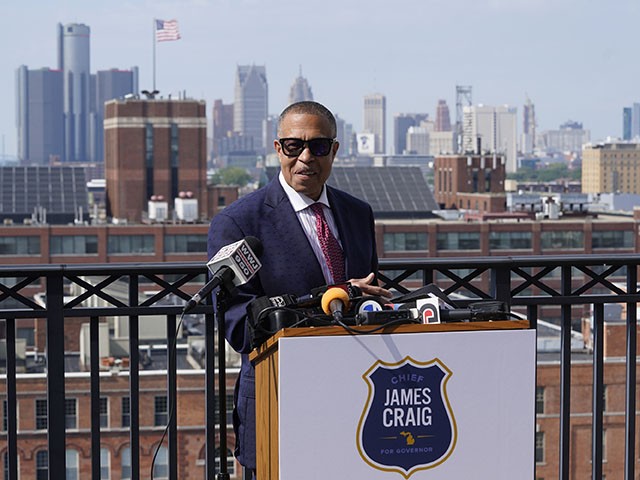 James Craig, a former Detroit Police Chief, announces he is a Republican candidate for governor of Michigan in Detroit, September 14, 2021. (AP Photo/Paul Sancya)

Craig, who dealt directly with the protests and violent riots that stemmed from Black Lives Matter demonstrations in 2020, drew a comparison to today’s Freedom Convoy protest, where participants are expressing opposition to forced coronavirus vaccinations and related mandates.

He explained that he successfully managed the protests in Detroit in 2020 because he let peaceful protesters demonstrate but mobilized law enforcement for any nonpeaceful occurrences.

“When cities were burning around our country — some cities were burning in our great state of Michigan — Detroit didn’t burn. We didn’t retreat,” Craig explained. “But we allowed, so long as the protesters were peaceful, like these truckers, we allowed them to march. They took over streets. So long as they kept it moving, we allowed them to march. As soon as they started to attack our men and women on the frontline, police officers, we took a firm stand on it. So the hypocrisy— I don’t care what ideology someone supports, once they violate the law, become violent, that’s where it stops.”

Craig also noted that he did not believe Black Lives Matter, an organization with radical anti-capitalist origins, had a message that resonated with residents of his majority-black city. Nearly 80 percent of the Detroit population is black, but yet the city did not see the same destruction as certain other cities, like Seattle and Portland, Oregon.

“I stood face to face with this group. This group did not represent the black community. It did not,” Craig said. “Because it’s called called Black Lives Matter or Detroit Will Breathe? The underpinnings of Black Lives Matter, as we know, are Marxist, and we also— many of the people that have come to the cities around the country proclaiming that they’re connected to Black Lives Matter, well, not really, because if black lives truly mattered, they stand silent on the majority of what happens in unfortunately, in communities of color is black on black crime, but no one never wants to address that issue.”