Protect the Public’s Trust (PPT), a government ethics watchdog, is suing the Department of Education in an effort to discover the level of influence teachers’ unions and other special interest groups had on keeping schools closed during the coronavirus pandemic.

PPT has filed several Freedom of Information Act (FOIA) requests in an attempt to see who department leadership is talking to and who might be influencing policy. The lawsuit, however, comes as the Education Department (ED) has failed to respond to such requests.

Describing the department as “truant in disclosing special interests influencing its leadership” in a press release, PPT cites reports that “teachers’ unions had unprecedented input in the development of school closure/reopening guidance issued by the Centers for Disease Control.”

“These same unions are active participants in political and advocacy campaigns,” the release continued. “Members of Department leadership include former employees of these unions as well as other powerful special interest groups that have been active in attempts to influence ED policy.”

As Breitbart News reported, “The Biden administration tightened its masking guidance after one of the country’s most powerful teachers’ unions — the National Education Association (NEA) — threatened White House officials with publicly releasing harsh criticism of the Centers for Disease Control and Prevention.”

In addition, Randi Weingarten and her American Federation of Teachers — the nation’s largest teachers’ union — has been on the front lines of advocating for shuttering schools, which led to significant learning loss, and social and developmental stunting among America’s young persons.

The lawsuit seeks to compel compliance with the FOIA requests in order to have a fuller picture as to if current department officials might simply have been doing the bidding of their former special interest employers. It names 28 current political appointees at the department, including Secretary Miguel Cardona, as persons of interest. 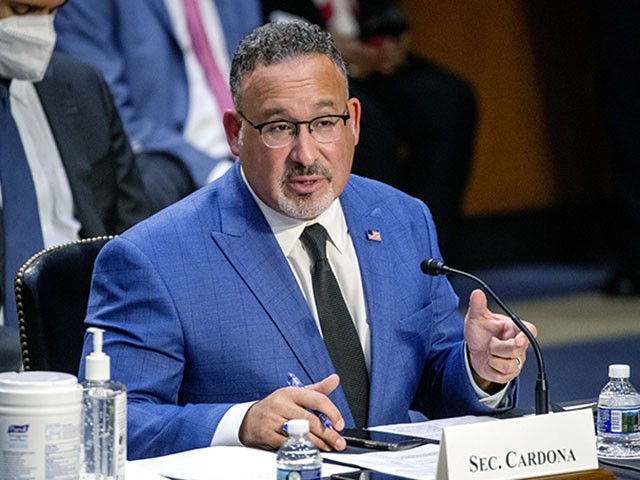 Secretary of Education Miguel Cardona testifies before a Senate Health, Education, Labor, and Pensions Committee hearing on September 30, 2021, in Washington, DC. Cardona has been named a person of interest in the PPT’s FOIA request. (Shawn Thew/Pool via AP)

“It’s no secret that teachers’ unions are among the most powerful political organizations in the country,” PPT Director Michael Chamberlain stated in the press release. “That paid off last year when they were able to shape the CDC’s return to school guidance, a fact revealed only through Freedom of Information Act requests.”

“These and other special interest groups not only have a stake in policy coming out of the Department of Education but have provided leadership at ED from the ranks of their former employees,” Chamberlain continued. “It is important for ED to assure the American public that all of their political leadership are acting consistently with their ethics obligations as well as disclose the influential special interests they have been meeting with and what they have been discussing.”