Republican National Committee (RNC) chairwoman Ronna McDaniel in a Tuesday interview with Breitbart News swatted away concerns from several Republicans that the party’s intervention against Pennsylvania GOP Senate candidate David McCormick’s post-election lawsuit is a sign the party has broader plans for interference in open primaries.

The RNC has a longstanding practice of neutrality in open primaries, and the party’s decisions to intervene against litigation from McCormick raised more than a few eyebrows among Republicans concerned the RNC might start engaging heavily for or against candidates in primaries. McDaniel, however, in an interview with Breitbart News insists that is not the case, that this is a “unique” case, and that the RNC does not view this action as working against McCormick or for his opponent Mehmet Oz–but merely as the RNC protecting its views and interests on election integrity in a key battleground state.

The facts of the case in question aside, however, many Republicans were concerned that the RNC had abandoned its position on neutrality by engaging in this litigation against McCormick–but McDaniel says there is nothing to worry about.

“Our record speaks for ourselves,” McDaniel said. “We have not intervened in any primaries this year. We have not. We have kept our neutrality. The primary was over when this court decision happened. We are intervening in a case that we’ve been involved in for over a year. Undated ballots should not be counted in Pennsylvania according to their state law. That is what this is about. This is about November, not this primary. We absolutely did not intervene in this primary. The amount of undated ballots that are out there, we don’t know what that is. It certainly should not lead to a slippery slope that Democrats can use to upend election integrity in November.”

At issue here is a lawsuit that McCormick, who trails Oz by less than a thousand votes ahead of an expected recount as the margin is inside the state’s 0.5 percent automatic recount window, filed this week. McCormick is pushing state and county elections officials in Pennsylvania to count absentee ballots mailed in by voters who did not write in a date on the ballot. The ballots are otherwise legal—they have the proper signatures and envelopes, and were received on time by the counties, who stamp them upon receipt—but state law says voters must write in a date on them. For some reason, many voters do not handwrite in that date and perhaps thousands of Republican votes in this case—a margin that could alter the outcome of the election—remain uncounted. 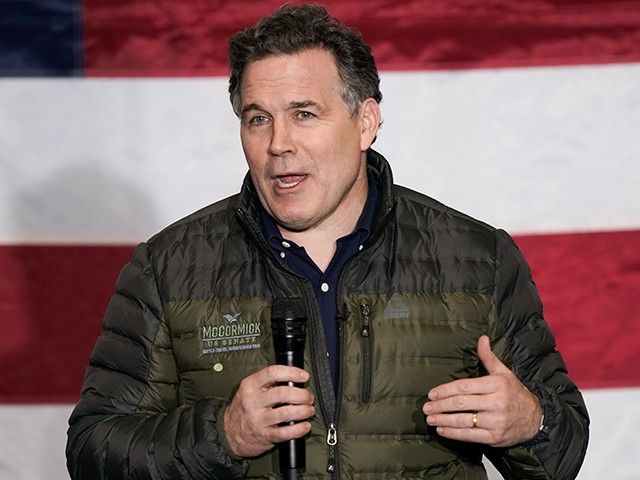 County elections offices in Pennsylvania regularly disqualify such ballots, and the GOP has fought to keep it that way and for legal victories in state court over the past year plus since the 2020 election. However, a panel of federal circuit appellate court judges, in the aftermath of last Tuesday’s primary, ruled in a separate election case that such ballots should be counted in that different election from last year. That panel included a judge appointed by former President Donald Trump and confirmed by a Republican senate, as well as two judges appointed by Democrat presidents. McCormick’s suit filed this week seeks to have such ballots counted in this race as well, and state elections officials at the Secretary of State’s office have ordered counties to count these votes but keep them separate from their formal tallies while the litigation plays out and the recount formally commences.

Then, late Monday evening, the RNC and the Pennsylvania GOP formally filed interventions against McCormick in his suit—a rare, perhaps unprecedented, action for the national Republican Party to file formal legal action in court against one of its candidates in an as-of-yet-undecided open GOP primary for federal office.

“I don’t view this as going against Republicans at all,” McDaniel told Breitbart News. “We believe that McCormick and Oz both represent the party incredibly well and we will be working with either of them to win the [general election]. However, election integrity is a key issue for our base and we cannot allow rules to be changed for an election and the laws of the states to be changed after an election. We just can’t allow that. Otherwise, Democrats will use that. We will not have credibility in November if Democrats bring similar suits saying to count undated ballots which we would absolutely oppose. So the only way we can be credible is by being consistent. We are a rule of law party and we believe every state should be upholding the laws that they are governed by. That includes if they don’t have ballot harvesting, they should not have ballot harvesting. If they say that the date should be on the ballot in a handwritten way, then it should be. Those are the kinds of things we are going to fight because we know the Dems do. This is about the Democrats and November—it has nothing to do with Oz and McCormick.” 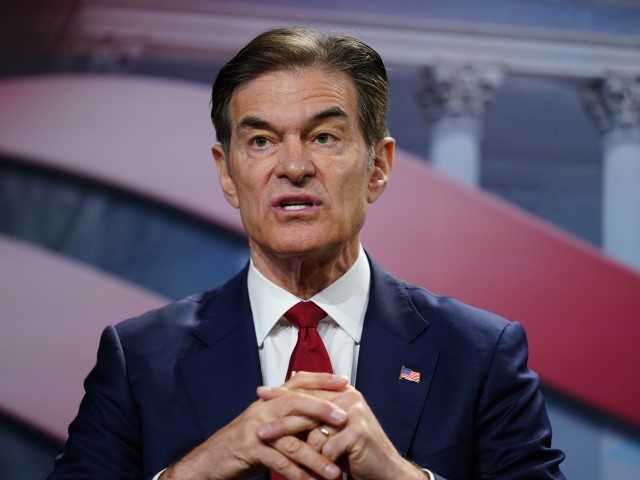 McDaniel argues that the GOP’s action in court by filing an intervention against McCormick’s lawsuit matches up with party action in other actions on this particular issue over the past year plus in Pennsylvania.

“We have been in this fight for over a year and we won at the Pennsylvania Supreme Court,” McDaniel said. “When you know—when Marc Elias is cheering from the sidelines that the slippery slope might be created, we know we’re on the right side of this. Pennsylvania law is incredibly clear: You do not count undated ballots. The Pennsylvania Supreme Court ruled on this this year. We do not want this to be a precedent that goes into November because then what’s next? Get rid of secrecy envelopes? Then what’s next? Allow ballot harvesting or allow ballots to come in? Our voters watched election laws be upended in 2020 and we are going to fight to make sure every state follows the rule of law because that’s what our party is and because we do not want to set a precedent that hurts us in the Senate race in November.”

While McDaniel says the RNC action here is consistent with the party’s litigation efforts on behalf of its push for election integrity, she says that this does not represent the party intervening in a GOP primary for or against a particular candidate.

“To say that we’re intervening is factually incorrect,” McDaniel said.

When Breitbart News noted that the action the RNC took here was against a lawsuit that McCormick—a candidate in said primary—filed in court, McDaniel said that the RNC’s actions do not amount to influencing a primary.

“That has nothing to do with McCormick,” she said. “We did not intervene in this election at all. We were neutral. We’re intervening in a court ruling that we’ve been involved in for over a year.”

She said this is part of an effort “to make sure that the laws that are on the Pennsylvania books are enforced. That’s it.” 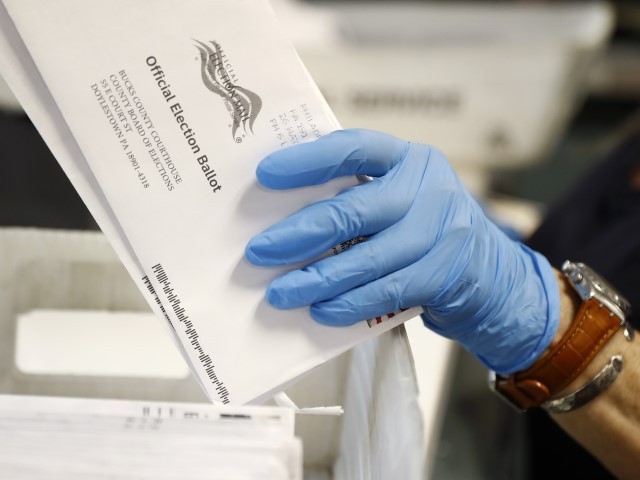 In this May 27, 2020, file photo, a worker processes mail-in ballots at the Bucks County Board of Elections office prior to the primary election in Doylestown, Pa. A statewide court on Friday, Jan. 28, 2022, declared that Pennsylvania’s expansive two-year-old mail-in voting law is unconstitutional, agreeing with challenges by Republicans. (Matt Slocum, File/AP)

Several Republicans were troubled watching the RNC take this action. Before McDaniel’s interview on this matter, several advisers to sitting lawmakers and to other candidates in other states nationwide told Breitbart News of their concern with this.

“The RNC is supposed to be neutral in open primaries—it’s wildly inappropriate to be intervening against a conservative Republican candidate,” one U.S. Senate GOP aide told Breitbart News, for instance.

“A good rule for the RNC to follow is to stay out of contested primaries,” another GOP official who is unaffiliated with the McCormick campaign but advising several other Republicans nationwide added. “It’s a rule that they have always followed in recent years so it’s mystifying why they’ve decided to break it in this case. It’s clear that they haven’t thought through the long-term implications of what they’re doing.”

A third, a Republican advising several other candidates nationwide and also unaffiliated with McCormick, told Breitbart News: “This is horrifying for every candidate and operative around the country because they opened Pandora’s Box in terms of the RNC interfering in primaries. Are they going to start intervening any time they feel like it? Where’s the line? Apparently subverting the will of the voters is a line they’ll continue to habitually cross.”

In other words, other Republicans nationwide are watching this episode in Pennsylvania play out and are concerned that the RNC may, depending on what happens in their elections, take similar action against their candidate or for another in litigation down the road if circumstances dictate it.

During the interview with McDaniel, Breitbart News read these quotes to her and asked her to respond to these legitimate concerns that Republicans have around the country. “I would say first of all the RNC is not intervening in a primary,” McDaniel told Breitbart News in response. “We do not intervene in primaries and we did not do that in Pennsylvania. We will fight to uphold the rule of law. We will fight for states to uphold their election laws. I would say to every single Republican, if it were a Democrat right now saying ‘let’s change the rules and change the laws after the election, and let’s count undated ballots which is against the law in the State of Pennsylvania,’ Republicans would be expecting the RNC to fight. The only way we will be credible fighting issues like this in November, which are sure to come up, is if we are consistent which we have been because we have been pushing this in Pennsylvania for a year.”

Later, she added that while this is a “unique situation,” the RNC will fight for election integrity and may end up in other litigation down the road in primaries even though she does not expect this often.

“Anything that undermines the laws on the books that are supposed to be enforced that govern the election that every state goes in expecting to follow, we’ll be supporting, upholding those laws,” McDaniel said.

When asked what she would tell the approximately 418,000 Republicans who voted for McCormick in the GOP primary in Pennsylvania who might be upset that the party is intervening against his lawsuit, McDaniel argued that they would, in her view, support the RNC on this matter.

“I’m hearing very different things,” McDaniel said. “I’ve talked to the Pennsylvania GOP chair who is also intervening, and he feels very similarly to what the RNC does — that many of the McCormick supporters agree with supporting the rule of law and that we do have to uphold election integrity. It’s a paramount issue in our party right now, especially in the state of Pennsylvania. It’s a slippery slope. We allow them to slide on one thing, what’s next? We have a very important Senate and governor’s race and congressional races in that state and we are only asking for Pennsylvania to follow the law on their books. That’s it.”