A poll released by Gallup on Tuesday found the world “sadder, more worried, and more stressed-out” in 2021 than the year before, pushing its “negative experience index” to a record high of 33 points in the first year of U.S. President Joe Biden’s term.

Gallup’s annual global bummer survey includes adult respondents from 122 countries. In 2021, 42 percent described themselves as “worried,” 41 percent as “stressed,” 28 percent as “sad,” and 23 percent as “angry.” 31 percent said they were in considerable physical pain.

Those figures represent a two-percent increase in worry and pain, plus one-percent increases in stress and sadness, over the year of the Wuhan coronavirus pandemic. On the bright side, anger fell by one point.

Gallup also asks about positive experiences and found them slipping downward for the first time since 2017. Positive experiences include laughter, enjoyment, learning, respect, and feeling well-rested. Laugher increased two points and learning increased by one, but the others all slipped.

Perhaps unsurprisingly, the abandoned people of Afghanistan felt especially miserable under their new masters, the brutal extremists of the Taliban. Not only are they sick, starving, and fearful for their lives, but Afghans are “losing the remaining joy they had,” and they were already the “least-positive country in the world,” although the Central African Republic posted the all-time lowest happiness score in 2017.

“The percentage of Afghans who said they felt enjoyment, smiled or laughed, learned something interesting, or felt well-rested the previous day all dropped to new record lows,” the survey found. 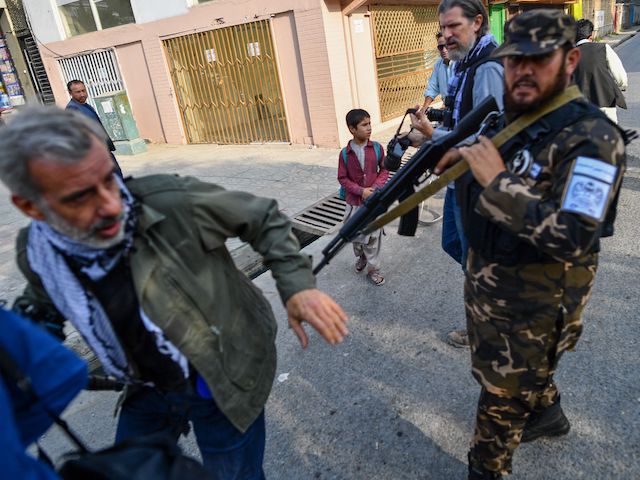 A member of the Taliban special forces pushes a journalist (L) covering a demonstration by women protestors outside a school in Kabul on September 30, 2021. (Bulent Kilic/AFP via Getty Images)

“Worry, stress and sadness soared to record levels in Afghanistan in 2021: 80% of Afghans were worried, 74% were stressed, and 61% felt sadness much of the previous day. Notably, no other population in Gallup’s 16‑year trend has ever reported feeling this much worry,” the pollsters reported.

Gallup suggested it is “even more imperative for policymakers to understand why the world is on this course and to look for ways they can change the path it is headed down,” although its analysts struggled to explain the global slide into misery, especially when many were expecting a rebound after the hideous year of the pandemic.

Some of the individual national results were easy to understand. For example, Lebanon topped the charts as the angriest country in the world, which is unsurprising given its comprehensively dysfunctional government, the bitter factional disputes that made it that way, and the miserable corruption and incompetence that blew half of Beirut to smithereens in 2020 – an atrocity for which no one has been held accountable two years later.

Gallup CEO Jon Clifton had three broad suggestions for improving global happiness: improving people’s sense of well-being at work, reducing their feelings of loneliness, and addressing global hunger. Unfortunately, there is every reason to believe global hunger will get worse, thanks to Russia’s invasion of Ukraine.