Harvard Law School instructor Alejandra Caraballo has called for the six conservative Supreme Court justices who voted to overturn Roe v. Wade to be harassed, in tweets that have gained wider national attention in the past several days. 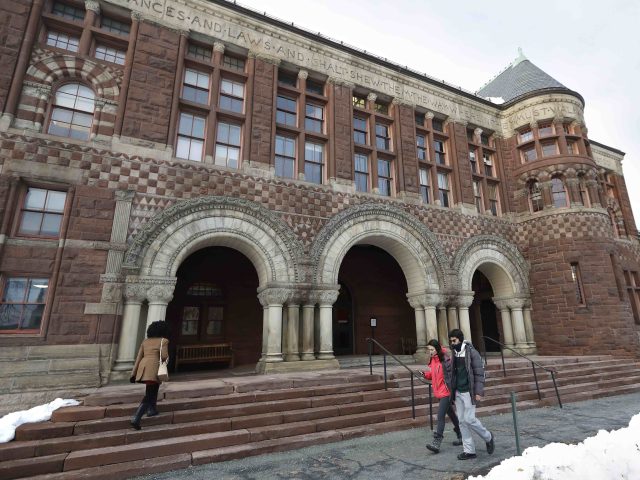 In this Thursday, Dec. 5, 2019 photo passers-by walk near an entrance to a building at Harvard Law School, in Cambridge, Mass. A cluster of commitments to atone for historical ties to slavery marks new territory in a reckoning at U.S. colleges that have responded up until now with monuments, building names changes and public apologies. (AP Photo/Steven Senne)

The 6 justices who overturned Roe should never know peace again. It is our civic duty to accost them every time they are in public. They are pariahs. Since women don't have their rights, these justices should never have a peaceful moment in public again.

They’re coming for contraception, same sex marriage, and the ability to criminalize LGBTQ people again. May those justices feel the unease, insecurity, and anxiety they seek to inflict on us.

Caraballo pushed back against criticism by distinguishing between “accosting” and committing acts of violence, sharing (approvingly) a video of Sen. Ted Cruz (R-TX) being harassed at a restaurant.

Ted Cruz being accosted in public at a restaurant. https://t.co/MubzqDHWqf

Caraballo also triumphantly shared a message indicating that calling for the harassment of Supreme Court justices was not a violation of Twitter rules:

As noted by Campus Reform, Caraballo is also an advocate for censorship, calling for Twitter to ban the popular conservative site “Libs of TikTok” as a “terrorist” enterprise because it shows liberals talking about themselves.

I have defended the right of people to protest justices, but having a right does not mean that you cannot abuse that right. Hounding and harassing justices and judges because you do not like their conclusions is wrong and dangerous. Most Americans are appalled by this conduct and we need to collectively condemn those who seek to mete out their own retaliatory justice.

As more on the left call for aggressive protests and public confrontations, this harassment is more and more likely to turn violent. There are many unbalanced individuals who will see such calls as a license for violent action. A justice or judge should not have to put his or her family at risk to serve on our courts. These academics are fueling a sense of mob justice that will cause untold harm to our judicial system and the rule of law.