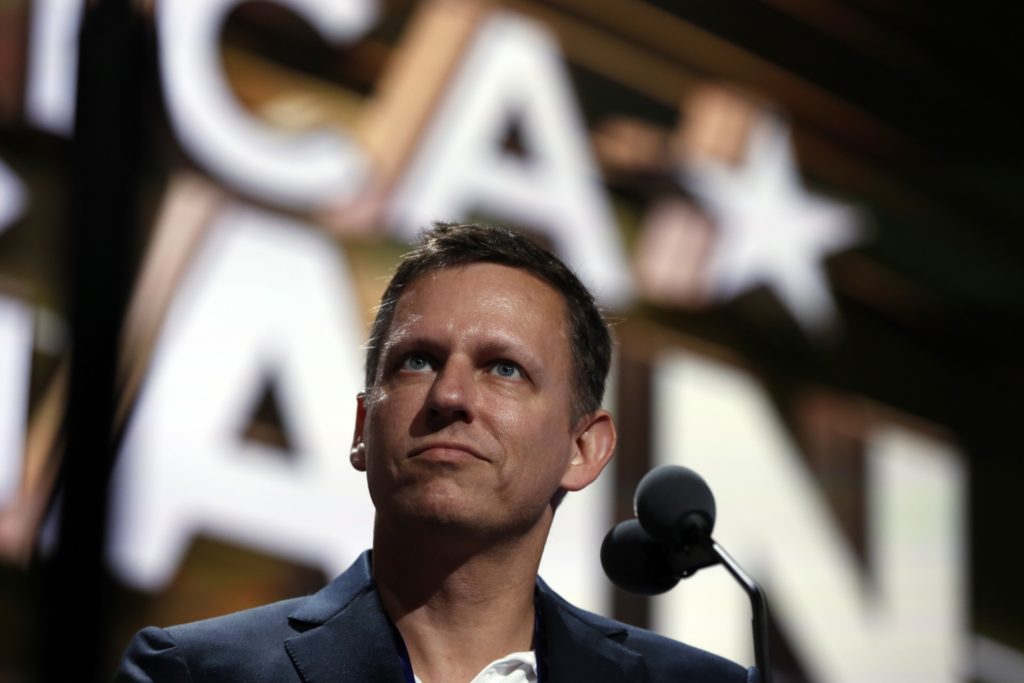 Billionaire tech investor Peter Thiel looks over the podium before the start of the second-day session of the Republican National Convention in Cleveland, Tuesday, July 19, 2016. (AP Photo/Carolyn Kaster, File)

Masters appeared at a Friday rally with former President Donald Trump and called the incumbent Democrat Sen. Mark Kelly (D-AZ) the “worst senator in America” and laid into “RINOS.” Masters has been surging in recent polls.

The Gateway Pundit/Cygnal poll from mid-July found that Masters had a double-digit lead over the rest of the primary field. He garnered 29.9 percent of the response, while Jim Lamon — his closest competitor — had 19.6 percent.

However, while his campaign has been significantly outspent on television by Republican primary opponent Jim Lamon, the pro-Masters super PAC is making up the spending gap. But, while Lamon has outspent Masters, Lamon had reportedly lent his campaign $14 million but only has $437,894 cash left.

Masters’ campaign, on the other hand, had $1.5 million in cash in mid-July, but $1.3 could only be used for the general election, so the Republican lent his campaign $639,000 over the last three weeks, Politico reported.

Politico noted that on television ads, Lamon has spent over $9 million. In comparison, Masters has only spent $1.4 million, but the super PAC spent $7.8 million to boost Masters, along with Club for Growth and Crypto Freedom Fund spending roughly $3 million on ads.

Thiel, the first major investor in Facebook, which has since rebranded as “Meta,” recently stepped down from the board of directors for the social media giant to focus on supporting Republican political candidates in 2022 midterms, such as Masters and J.D. Vance in Ohio. Thiel also spent $15 million helping Vance, who won the Republican Senate nomination in Ohio in May.