Lucian Wintrich is the host of tonight’s Pro-Trump art show “Daddy Will Save Us” in New York City featuring pieces from Milo Yiannopoulos, Martin Shkreli, Gavin McInnes, and many more.

Wintrich, a gay conservative photographer who already caused ripples of controversy with his “Twinks for Trump” photoseries, sent shockwaves through the largely left-leaning art world with his proposed art show. He was thrown out of his first venue and faced legal threats over his proposed exhibit.

Shortly before the groundbreaking show got underway, he sat down for a phone interview with Breitbart Tech’s Allum Bokhari about the event, the controversy surrounding it, and the thoughts of the man behind it all.

Allum Bokhari: When’s the last time that this has happened, that someone was barred from a gallery for the politics of their exhibit?

Lucian Wintrich: I believe it was Mapplethorpe and it was the conservative Christians and evangelicals (who were protesting). It is an example that the left is just as if not more reactionary. 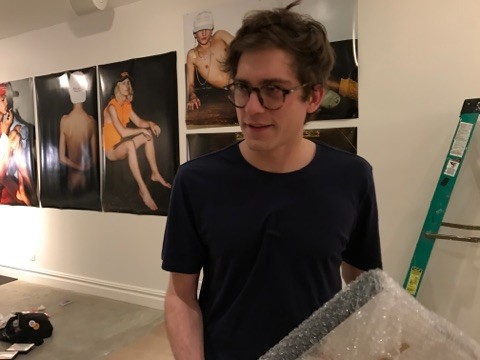 A: Do you think the scales have tipped then, that it’s now the left who are the new “Moral Majority?”

L: I think that the scales have more than tipped. You look at the left right now saying “yeah we’re gonna beat the shit out of you, watch your back.” When the Christians were protesting that, they weren’t necessarily inciting violence; they were saying “yeah we’re not gonna touch you but you’ll burn in hell later on.” So I think I’d prefer that threat.

I have been a little bit freaked out (by the leftist protesters) but at the same time, these people are so used to that method of intimidation and coercion that it’s sort of worn thin I think.

A: So tell me about yourself. How does a gay photographer who works for media companies in New York become a Trump supporter?

L: Well I absolutely despise Clinton and I think Trump is a brilliant representation and embodiment of how we can help turn around what I feel to be a terrible direction that this country is currently headed in. Clinton’s so untrustworthy and such a panderer that she will find the lowest common denominator, regressive emotion which stifles culture, stifles art. It holds us back and it puts us in a place that Germany knew very very well until cultural notions sort of took hold there. And now they’re sort of crashing and burning and I think that will very soon be seen in their economy 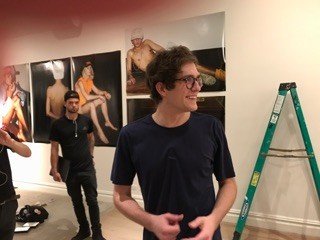 A: Are you referring to Germany’s immigration problem?

L: Yes, yes, mostly I think it’s a combination of their immigration and they have the same sort of regressive oversensitivity where “my god we can’t really say anything, we need to respect every single thing that we’re told to respect” and it’s tip toeing. When did Western culture become so scared of Western culture? It’s unfortunate and I think Trump is helping to change that.

Even this nonsense that came out where he was accidentally recorded or left the lavalier on his jacket on. The people that are saying “this is outrageous, this is disgusting,” I don’t know if they have friends and I don’t know if they’ve ever just sat down at a bar for an hour. I mean that is typically how a lot of Americans talk and I feel like fifty years ago it would have been laughed off. There’s also this thing going on right now in the world where almost everything is recorded and everything is documented and filmed and photographed. Either we have future politicians in one of those Plato’s republic type of scenarios where they’re not exposed to any elements of the more crass elements of American culture and then we throw them into the American eye after they’ve lived this sheltered closed life…

A: Isn’t that what Clinton is to some extent? She’s been in politics for more than half her life.

L: Oh she really is and she’s bringing back a bunch of cronies who are part of that world where their actual only job is to maintain power. They were raised and they were continuously told all they had to do was maintain power at any cost. Trump not so much. I mean he definitely has a sense of capitalism and business power, the whole point of business is to advance but it’s completely different to the coercive power of politics. Which is why I’m more of Goldwater conservative. Some of Trump’s policies I think might be as wonderful as those of Goldwater and he does still embody a large portion of the conservative spirit and conservative ideology. People say “well Hillary Clinton is more conservative than some Republicans” and yeah, but the parts of her that are conservative are the worst parts of the platform. And what Trump has absorbed from the conservative party and the American populace in forming his policies I think is vastly more reflective of the climate we’re in right now and what we need to advance as a country. 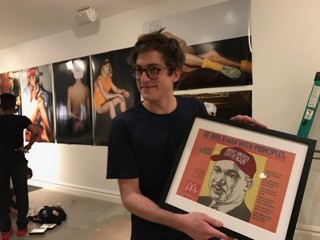 A: Why did you choose the artists that you chose?

L: Over the course of the last month or so a bunch of my pieces were sort of propagating online, a lot of other conservatives, about 50 conservative artists reached out to me. Some of them were terrible, as is to be expected, and some of them were fantastic. And I think what I really was going for in the final selection of artist was diversity of ideologies within the party, different worldviews, and as many mediums as possible, so we don’t really have too many of the same form of art. Obviously with Milo, he gave a drag performance in front of 2500 young Republicans at LSU, so that is like a form of educational performance art. I think Milo’s talk is absolutely brilliant art and I don’t think a lot of people recognise that. I’m especially excited about Milo’s piece.

A lot of people on the left expect to hate him. They have no idea what he’s actually doing, what he’s saying and what the actual cultural benefit is of what he’s achieving right now. He’s a brilliant conservative mind and he’s absolutely an artist and so with this show, we’re putting it in New York which is the heart of the art world. So we’re taking an artist to a place where many people don’t know that his character is a large part of his art and we’re bringing him into that world. So it’ll be interesting to see how people react to that and if they sort of, I dunno, everythings open to interpretation.

A: There was talk of potential protests by activists ahead of the event. Do you envision any trouble?

L: I think literally anything could happen. I think that the protesters might just be pussies because of the rain, maybe they won’t show up. I haven’t heard anything leaked through the grapevine, I tend to think liberals are generally stupid but maybe they got smarter and figured out a better way to execute this. But really anything could happen, very luckily we do have four navy seals working security, we have the new york fire department, so I don’t think they can slip in necessarily. This is a fairly controversial show so I don’t know. If the birdman can break out of Alcatraz then I wouldn’t be surprised if one liberal was able to slip through the doors. A: People talk about the enthusiasm gap, and I don’t see many art shows being planned for Hillary. A lot of people are voting for her because they hate Trump or they just don’t want the Republicans to win, but they don’t seem very enthusiastic about her. Do you think this art show is another example of this gap? I mean, I don’t think there’d be an art show for Jeb Bush either…

L: I do think that there’s far more young people excited for Trump than there are excited for Hillary and that’s sort of everything. If you read all the arguments for supporting Hillary they’re just “oh well she’s better than Trump.” And that sort of notion or idea that “oh ok well I guess mom if we’re having Tofu for dinner it’s better than nothing,” that’s not really going to elicit the same sort of excitement and an expression in the art as a candidate like Trump. And I think inherently he lends himself to art. He’s a celebrity and before this election he was a very loved figure by everybody, left or right in New York and he’s a pop culture icon. So we’re just sort of translating that to a variety of mediums. 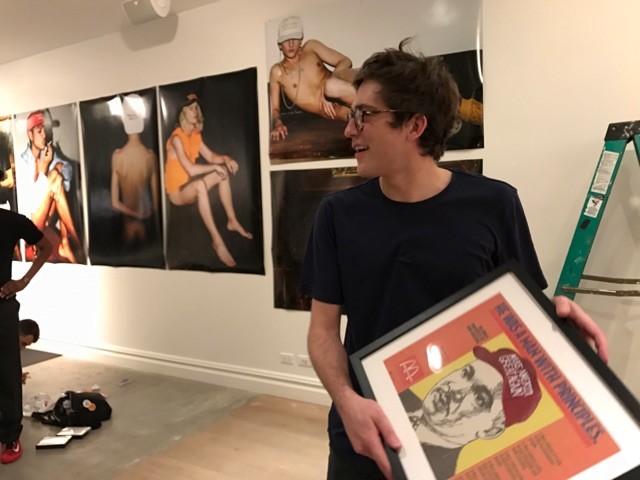 A: Final question: you mentioned Germany and western culture earlier, do you think artists these days, especially left leaning ones, tend to not be so keen on western culture, would you like to see more artists celebrate western culture instead of denigrate it

L: Oh absolutely! Absolutely! If not for western culture they wouldn’t have the ability to express themselves, the enlightenment in the arts and literature and everything else, it’s a byproduct of western culture. It’s unfortunate and I do think that a lot of artists are very politically stupid and I know plenty of truly incredible artists in New York who are brilliant painters and brilliant photographers and they’re so blind and led by leftists because that’s the culture that they know. I think they have a wonderful sort of technical skill but no real understanding of what they’re talking about politically.