I just ran a half marathon on a whim without training for it.

I heard on Thursday about a race in my community. By 7 a.m. Sunday, I took off from city hall with hundreds of better-prepared runners. Sadly, I didn’t win.

My unconventional preparation consisted of eating a Hershey bar, drinking a Red Bull and two Cokes, and smoking at least two double-gordo cigars every day hunched over a computer the week of the race. The chocolate surely provided much-needed fuel, the cigar puffs increased breathing capacity, and the sugary elixirs hydrated. Had I known of the impending athletic contest, I would have doubled my intake.

To provide a proven advantage over the other competitors, I wore all black for the half-marathon. Black attracts the sun and the sun gives off energy to all living things. It’s science. Look it up.

My gear included black sneakers, black socks, grayish-black basketball shorts, and a black shirt. The upper-body garment, in contrast to those boasting past marathons and 10Ks covering the chests of other runners, advertised a crucial component of my preparation: cigars. This Swisher Sweets shirt, complete with air conditioning from its many holes, came via mail in exchange for five proofs of purchase cutouts back in the late 1990s before the government banned such charitable apparel giveaways from the tobacco companies. “Roll with the Sweet Times,” the t-shirt informed runners catching up to me. In a less literal sense, the message on the shirt’s back provided the necessary warning that health obsessions, like all obsessions, aren’t very healthy. As Aristotle reminded, moderation in all things—including moderation.

Most importantly, I did not run a single mile the week of the race (although I usually run two-to-three miles every few days at about a nine-minute-mile clip). Rest proves good preparation for exertion. Why get tired to prepare for getting tired? 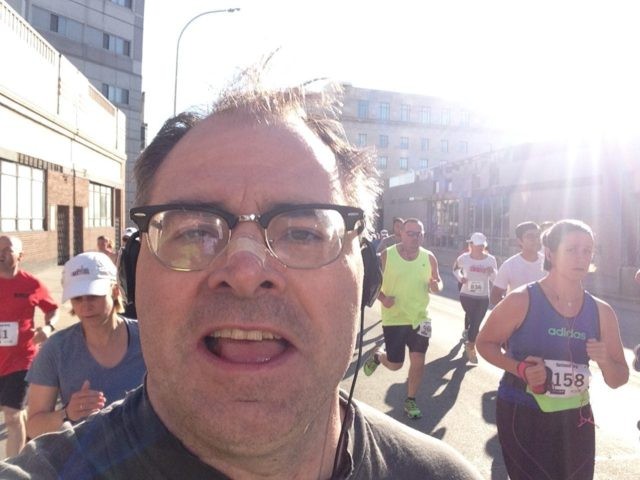 The “experts” decry my unique training techniques and vehemently caution against running a half-marathon without “proper” training. Janet Hamilton, the founder of Running Strong Professional Coaches, told Women’s Health, “The thought of someone just jumping out the door and doing a half with no training makes the hair on the back of the neck stand up.”

A quick search of the Internet, which contains only the truth, the whole truth, and nothing but the truth, shows that many adventurous spirits before me did just what I did. Irish twins known collectively as Jedward even completed the Los Angeles Marathon a day after a transatlantic flight without training for it. They did so wearing stars-and-stripes shorts and track-suit tops below Kid ‘n Play haircuts. So-serious medical types, whose professional exposure to health problems makes them morbidly preoccupied with them, denounced the stunt as reckless. But it’s not like anyone ever died running a marathon, right? And who’s this Pheidippides character I keep hearing about?

The organizers provided water stations every mile or so. The surprise of dumping orange liquid on my face alerted me to the fact that these refreshment tables also provided Gatorade. An epiphany soon followed that, despite my decades-long belief in the superiority of orange Gatorade, green Gatorade reigns supreme among sports drinks. But as hydropathy enthusiast Bronson Alcott or AA’s Bill W. could tell you: Water is best.

Kind citizens also offer their hoses and dixie-cup rejuvenation. One eager dispenser of H2O possesses the appearance of what I imagine the ‘80s-era Tylenol tamperer looked like. I refuse the bearded gentleman’s tempting offer despite my thirst.

Along the run, cheering spectators, and an older African American female runner and a fit-but-thick male Hispanic racer, encouraged me to pick up the pace. Enthusiasm is contagious. My iPod contained no special playlist. But several clichéd inspirational songs—Bill Conti’s “Going the Distance” from Rocky, Van Hagar’s “Dreams,” and, especially, Young the Giant’s “My Body”—made me a running cliché, accelerating my movement at the request of these musical Tony Robbins-type tracks.

Speaking of my body, it held up well to beyond the halfway point. At about the nine-mile mark, the joints in my knees began to affect my movement. My hips stiffened, transforming my stride into a shuffle. Between miles ten and twelve, I occasionally broke my only rule of running—keep running—by breaking into a long-stepped walk to stretch out my no longer limber limbs. It worked poorly, perhaps unleashing lactic acid. My feet, feeling the pounding of my two-hundred-pound, fortysomething frame, hurt terribly. But, unlike the hips and knees, the pain of my pedals required only mind over matter to overcome. Far from winded, I felt exhilarated. But joint pains and hip tightness gave the appearance to onlookers that I was running in water—or at least, in Morrissey’s words, “trudging slowly over wet sand.” 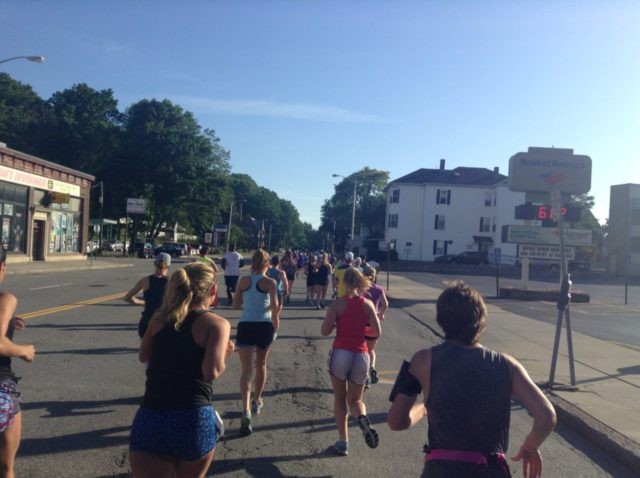 An octogenarian, whose jalopy-like body mechanics resemble a contraption found in a Terry Gilliam movie or Ray Bradbury story, moving toward the halfway mark as I ran in the opposite direction after the turnaround, amazes me. He amazes again several miles later as he passes. Age offers numerous handicaps but experience remains not among them. Despite Mother Nature and his flipped odometer contorting his movements, he clearly runs long distance neither for the first nor last time.

Sub ten-minute miles became sixteen-minute miles. A Father’s Day present in the appearance of my children—one shouting “You can do it!” in Waterboy fashion—pushes me over the finish line, where, after averaging modest, to immodestly put it, 13-minute miles, I nevertheless receive a medal and a banana, with the latter more welcome than the former. Hunger rather than thirst strangely calls loudest after a marathon of a half-marathon. I promptly collapse under a tree and devour several slices of the cold pizza generously provided by the organizers.

My training, strategy, and preparation paid off precisely as predicted.