Members of the Norway beach handball team are speaking out after they were fined by the sport’s governing body for wearing shorts instead of the required bikini bottoms.

Making an appearance on ITV’s “Lorraine”, two of the team’s members, Tonya Lurstaad and Julia Bird, expressed their frustration with the fine and the rule, saying there is “no good reason” why the women on the team should be required to wear bikini bottoms instead of shorts.

“For our federation, there has been a lot of support,” Lurstaad said. “Every other federation as well – except the ones making the rules – have supported us. We’re so thankful for the support.”

“We’ve just been told that this is the rule,” she added.

Bird said the team has received support from men in the sport, saying the support is “overwhelming” from people who are “shocked” that women still cannot choose which outfit they want to wear.

The Norwegian beach volleyball girls wanted to play in these shorts instead of in bikini bottoms which they found too revealing but were threatened by the EC tournament organizer with fines if they wore anything covering more than 10cm of their butts pic.twitter.com/LHSxXz91CM

“People have been quite shocked that women today in 2021 can’t choose what they want to wear,” Bird said. “It’s been overwhelming actually.”

“If the guys can do it in a T-shirt and shorts, we should be able to do it in the same exact outfit,” Lurstaad said. 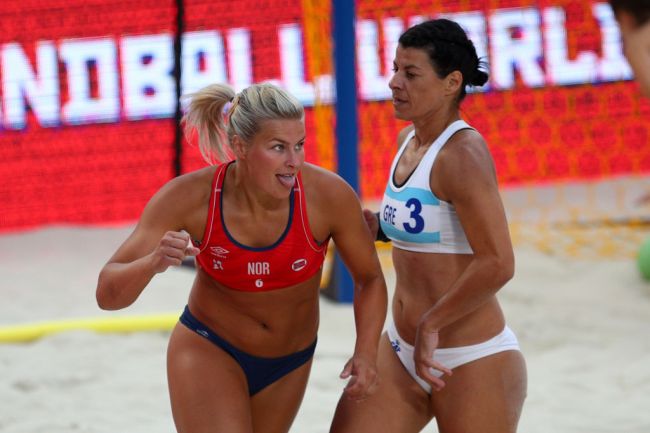 The governing body released the following statement on the matter, calling it a “case of improper clothing”:

The Disciplinary Commission at the Beach Handball EURO 2021 has dealt with a case of improper clothing. In the bronze medal game against Spain on Sunday the team of Norway played with shorts that are not according to the Athlete Uniform Regulations defined in the IHF Beach Handball Rules of the Game.

According to Fox News, “Norway’s Handball Federation agreed to pay the fines levied on the players and expressed support for them.”

“We are very proud of these girls who are at the European Championships in beach handball,” the organization said. “They raised their voice and told us that enough is enough.”

“We are the Norwegian Handball Federation and we stand behind you and support you,” the organization added. “We will continue to fight to change the international regulations for attire, so that players can play in the clothing they are comfortable with.”