House Speaker Nancy Pelosi (D-CA) warned U.S. athletes attending the Genocide Games in Beijing that they risk the wrath of the “ruthless” Chinese government if they speak out against human rights abuses.

“When the Winter Olympic Games begin tomorrow in Beijing, the Chinese once again will attempt to distract the world from a decades-long campaign of abuse and repression,” Pelosi said. “But the United States and the international community know the truth.

“While we fully support and will root for our athletes, we cannot and will not be silent on human rights in China,” Pelosi later added. “Over the next two weeks, it is our urgent moral duty to shine a bright light on the many human rights violations being perpetrated by the host nation.” 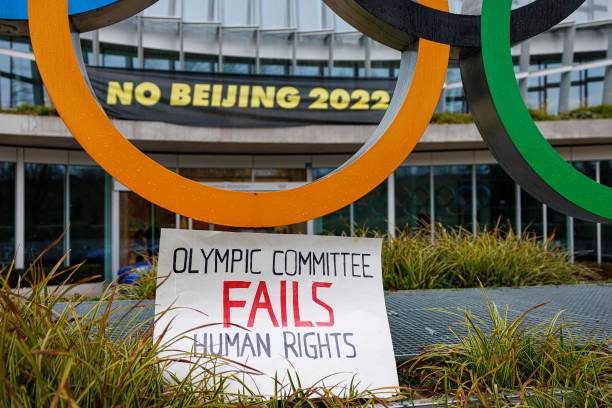 This photograph, taken on December 11, 2021, shows a placard at the entrance of the International Olympic Committee (IOC) headquarters during a demonstration of Tibetan activists from the Students for a Free Tibet association ahead of February’s Beijing 2022 Winter Olympics in Lausanne. (Photo by VALENTIN FLAURAUD/AFP via Getty Images)

“Now the IOC, aided by corporate sponsors, once again turns a blind eye with the 2022 Winter Olympics just to bolster their bottom line,” Pelosi said.

Despite her moral outrage, Pelosi urged the U.S. athletes attending the games to compete rather than criticize the “ruthless” Chinese government.

“I would say to our athletes — you are there to compete,” Pelosi said. “Do not risk incurring the anger of the Chinese government because they are ruthless.”

“I know there is a temptation on the part of some to speak out while they are there; I respect that. But, I also worry about what the Chinese government might do to their reputations, to their families,” she added.

The hearing on Thursday was reportedly orchestrated “as a platform for Pelosi and several activists to highlight China’s human rights record, including reports of forced labor and acts of genocide against the Uyghur ethnic community in the Xinjiang region as well as suppression of democratic protests in Hong Kong and religious repression of Tibet’s Buddhists,” according to Bloomberg News. Representative Jim McGovern, the Democrat in charge of the committee, said that “no athlete” would compete in a genocidal country if “given a choice.” 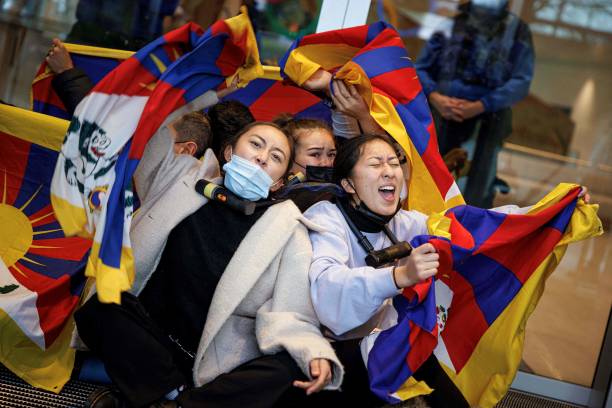 Tibetan activists from the Students for a Free Tibet association as they perform a sit-in at the entrance of the International Olympic Committee (IOC) headquarters ahead of February’s Beijing 2022 Winter Olympics on December 11, 2021, in Lausanne. (Photo by VALENTIN FLAURAUD/AFP via Getty Images)

“If given a choice, I believe no athlete would want to compete in a country committing genocide and crimes against humanity. But that is what they are forced to do because of the feckless IOC and its corporate sponsors,” he said.

Nancy Pelosi tells U.S. Olympic athletes not to "speak out" against the Chinese Communist Party in Beijing lest they risk "incurring the anger" of the Chinese government. pic.twitter.com/kzwSYdMJyM