South By Southwest (SXSW), the annual festival of interactive media that once turned homeless people into WiFi routers, has lost its moral compass. See what I did there? But seriously: the festival has, in cowardly fashion, cancelled two panels discussing video games after they were subject to “anonymous threats.”

SXSW previously announced two panels on gaming for their 2016 festival. One, “SavePoint: A Discussion On The Gaming Community,” was organised by the Open Gaming Society to discuss issues of politics and journalistic integrity in the video games industry. The panel featured independent game designer Nick Robalik and NBC producer and President-Elect of the Society of Professional Journalists, Lynn Walsh.

Another panel entitled “Level Up: Overcoming Harassment in Games,” organised by social justice warriors, had also been approved by SXSW. The panel featured the notorious activist Randi Harper, whose perpetuation of the same online abuse she claims to fight against has been well-documented.

Both panels have now been cancelled. In a statement, SXSW explained that they had “received numerous threats of on-site violence related to this programming” and that the panels were cancelled to “keep dialogue open and respectful.”

In other words, they received a few empty threats from the internet, clearly intended to shut down the panels, and SXSW spinelessly caved in. Bizarrely, they justified their decision by referencing “strong community management.” But cancelling discussion between two important groups in the gaming community has nothing to do with either strength or community.

Their contention that the panels would not be “open and respectful” is baffling. London’s annual Battle of Ideas Festival, hosted by the Institute of Ideas, recently hosted two very well-attended panels that discussed GamerGate. My colleague Allum Bokhari and I were on one of them. The Society of Professional Journalists also hosted a GamerGate panel this August, which I attended. It was so productive that the SPJ are now considering making a bigger push to raise standards in the games media.

The SPJ event eventually had to be evacuated after it, too, received a number of threats. But in contrast to SXSW, SPJ organiser Michael Koretzky did not respond by wilting in the face of online miscreants: he simply re-convened the panel in an abandoned yard outside the venue, even after the local PD insisted on shutting the event down. Say what you want about the man, but at least he has balls. SXSW might consider pulling a pair from their missus’ purse and strapping them on.

Mainstream tech and gaming journalists could take a few lessons. As is now customary, they responded to the threats against SXSW by blaming everything on GamerGate. “The online hate mob known as GamerGate is good at two things,” wrote Re/Code’s Noah Kulwin. “Sending horrible threats to women and forcing people to shut down events.” He then compared the movement to white supremacists and proceeded to block anyone who tried to fact-check him on Twitter. If there was any greater demonstration of the need for higher standards in the tech and games press, Kulwin proved it.

An oddly principled stance was taken by Buzzfeed, who have threatened to pull out of the festival if SXSW does not reinstate the two panels. Their message to SXSW is tinged with the typical biases of a Buzzfeed writer, but they do call for the reinstatement of both panels.  While I would personally be overjoyed if Buzzfeed didn’t show up to my party, I have to applaud them for trying. 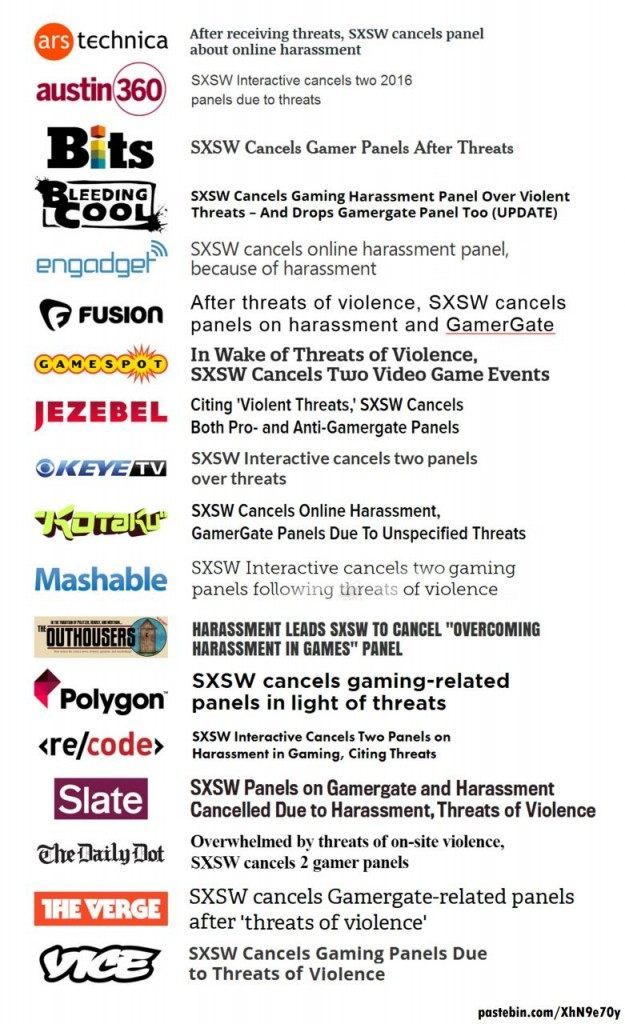 However, the media portrayal of the incident remains dire. Over 20 articles have been published since SXSW’s announcement, with all the inaccuracies we’ve come to expect from mainstream coverage of video game controversies. It was a barrage of media groupthink reminiscent of the notorious “Gamers Are Dead” blitz, a spate of articles in 2014 that alienated games journalists from their readers and helped spark GamerGate.

Almost all, including Kotaku, The Verge, The Guardian, and Mic claimed that one or both of the panels were pro-GamerGate, anti-GamerGate, or “GamerGate related,” despite the fact that neither claimed to represent any “side,” and neither even referenced the controversy.

But even if they were correct about the (neutral) Open Gaming Society’s event being as a “pro-GamerGate panel” (it wasn’t), they once again misidentified the aggressors of the story. Over the past year, GamerGate-organised meetups and panel events have been subject to multiple credible bomb threats. When AEI scholar Christina Hoff Sommers organised a meetup of GamerGate supporters in Washington, D.C., we faced a bomb threat. The threats against the SPJ panel in Miami have already been discussed. Even casual meetups of GamerGaters in Australian pubs face bomb threats.

This isn’t a claim to victimhood: unlike their opponents, GamerGate supporters would not thank me for going on a long-winded spiel about the terrible oppression caused by empty, anonymous threats on the internet. Like them, I prefer to treat ridiculous threats with a ridiculous attitude.

It’s a shame that SXSW doesn’t take the same approach. The SPJ, the Battle of Ideas, and GamerGate have all been where they are, and did not bow to anonymous trolls or aggrieved feminists who try to shut down events with empty threats. You would think that a digital media conference would understand the internet, and understand how trolling works. Alas, no.